Scoot Over: Get Ready for Rental Mopeds 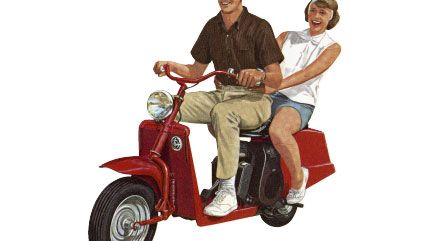 When rentable electric scooters began appearing on sidewalks across American cities in 2018, some local governments lost their minds while others allowed the new transit tech to flourish, reasoning that these "e-scooters" were no more a public safety concern or nuisance than are bikes.

This summer, cities that welcome innovation could see the next big thing in "micromobility": rental mopeds.

"This idea of micromobility, I think it's here to stay in the U.S.," says Ivan Contreras, co-founder and CEO of Muving, which hopes to bring fleets of canary-colored two-wheeled mini motorbikes to city streets in 2019. The company already operates more than 2,500 rental mopeds across Europe.

Last year Muving launched a pilot program in Atlanta with about 100 such vehicles. By the end of this year, Contreras says, it could be operating in Washington, D.C., with plans to expand into other cities in the South and along the East Coast.

Mopeds have several advantages over e-scooters. They're larger, which means they're more easily seen by vehicles, while still being small enough to park unobtrusively. They seat up to two riders and can reach speeds of 30 miles per hour. Each Muving moped will come with helmets tucked into a small trunk behind the seats. Otherwise, they'll work the same way as most e-scooters: Users download the app, enter their driver's license and credit card info, and get automatically charged 80 cents per minute.

E-scooters might have an edge for short trips of a few blocks, but Muving plans to fill a slightly different niche for cross-city trips that now often require a bus or Uber.

It's yet another example of how entrepreneurs are finding "fun and exciting ways to solve" the infamous "last-mile problem," says Jennifer Huddleston Skees, a transportation policy research fellow at the Mercatus Center, a free market think tank based at George Mason University. "Rather than imposing regulations that can prevent the successful launch of such products, cities should look for ways to work with innovators and think beyond our present transportation options."

While e-scooter companies took an ask-forgiveness-rather-than-permission approach, Muving is trying to win approval from local governments first. Contreras says cities should be willing to hop aboard, since mopeds not only increase mobility for residents but also help ease congestion, parking, and pollution by reducing reliance on cars.

Cities should indeed stand aside and let residents decide whether mopeds should be part of an increasingly diverse transportation menu.