Elizabeth Nolan Brown | From the May 2019 issue 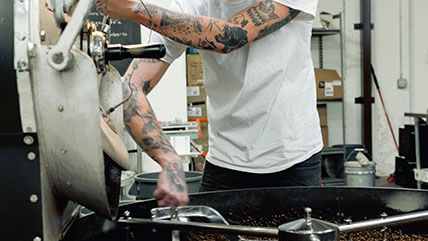 Midnight Cowboy is "our darkest blend yet," advertises the Portland coffee company Ristretto Roasters. "This full body blend is ideal for those who prefer the smokey flavors of darker roasts." That would be me. And Ristretto's Cowboy coffee did not disappoint, offering a rich cup of joe that went down smooth, with a creamy aftertaste and none of the bitter notes that come with my usual Folgers.

Alas, the same can't be said for a recent Ristretto controversy. Last December, Nancy Rommelmann—an author, an occasional Reason contributor, and the wife of Ristretto's owner, Din Johnson—launched a YouTube series called #MeNeither, in which she and Penthouse columnist Leah McSweeney discuss, among other things, recent controversies surrounding sexual impropriety and abuse.

The fledgling series' attempt to be nuanced about issues that many prefer to see in dark blacks and spotless whites got Ristretto Roasters in hot water in very progressive Portland. Some current and former employees blasted off a protest letter to the media regarding the boss' wife's ideas. "We believe it is a business owner's responsibility to create a safe and supportive working environment for their employees," reads the letter, which goes on to accuse Ristretto of failing on that front because Rommelmann's YouTube show exists.

Rommelmann had previously been involved in Ristretto's management. But owner Johnson explained in a letter to The Oregonian that "Nancy is neither an owner nor employee of Ristretto" and "the company has zero involvement with her work."

Nonetheless, several local retailers dropped Ristretto products, and in Portland many folks promised to boycott. But direct online sales (at rrpdx.com) make it possible for folks far outside Portland to sample Ristretto's whole bean coffees ($14–$17 per 12-ounce bag) and loose-leaf tea ($20 per tin) while taking a small stand against the sort of scolds who would harm a local business because the owner's spouse dares to say things they don't want to hear.