A wild-animal preservation program has become a scheme for corralling captive beasts that bother cattle ranchers. 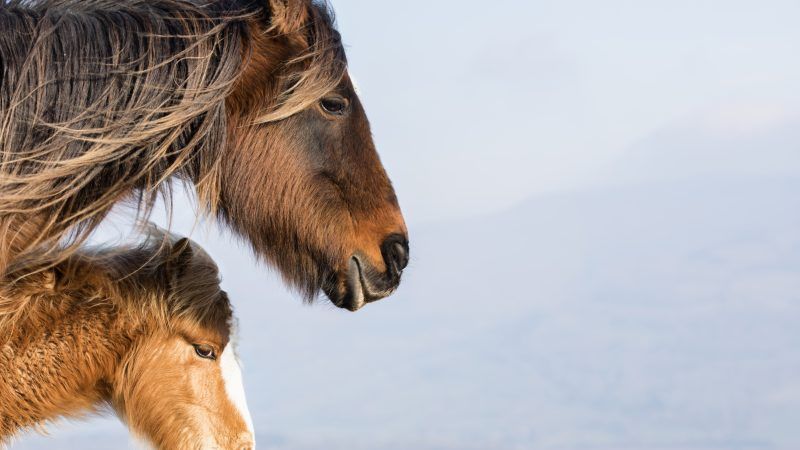 Cattle ranchers who lease public land to graze their livestock tend to see free-roaming wild horses as nuisances, fueling conflict among commercial interests, bureaucrats, and animal advocates. A controversial agreement was hammered out last week—but, unsurprisingly, that has hardly settled the dispute.

That something had to change is granted by pretty much everybody involved in the wild horse debate. The government can't just continue removing wild animals from the land and warehousing them at growing expense, as it has done for decades.

In "The Wild Free-Roaming Horses and Burros Act of 1971," Congress announced "that wild free-roaming horses and burros are living symbols of the historic and pioneer spirit of the West; that they contribute to the diversity of life forms within the Nation and enrich the lives of the American people; and that these horses and burros are fast disappearing from the American scene." Lawmakers ordered the Bureau of Land Management (BLM) and the U.S. Forest Service (USFS) to keep what was left of the population—perhaps 10,000 animals—alive and kicking.

Government officials sort of complied with the congressional mandate—the population of wild horses and burros has certainly grown, to over 80,000. But more of that population now lives in captivity than roams free, with holding costs consuming roughly half of the budget designated for protecting the herds.

The BLM, which inherited the lion's share of the task, managed to turn a program intended to preserve a population of much-beloved wild animals into a scheme for corralling captive beasts that nobody wants and some interests positively dislike.

Return to Freedom, a wild horse and burro advocacy group, sees serious conflicts of interest at work. The group's website points out:

In 2013, the National Academy of Sciences (NAS) took a formal look at the management of the wild horse and burro population and agreed that officials have made a hash of balancing their responsibilities.

"The goal of managing free-ranging horses and burros to achieve the vaguely defined thriving natural ecological balance within the multiple-use mandate for public lands has challenged BLM's Wild Horse and Burro Program since its inception," the report found. Worse, BLM officials appear to have been making it up as they go along in terms of policies and procedures.

"The links between BLM's estimates of the national population size and its actual population surveys—the data that underlie these estimates—are obscure," the NAS assessment continued. "It seems that the national statistics are the product of hundreds of subjective, probably independent judgments and assumptions by range personnel about the proportion of animals counted during surveys, population growth rates, and other factors."

If BLM hasn't quite managed the challenges of conducting headcounts, it's probably no surprise that management of the population has been equally sloppy. Removal and culling of herds to get them out of the way of competing interests even as those herds experience rapid growth—15 to 20 percent per year—is the result of ill-considered policies chasing themselves in a circle.

Management practices are facilitating high rates of population growth. BLM's removals hold horse populations below levels affected by food limits. If population density were to increase to the point that there was not enough forage available, it could result in fewer pregnancies and lower young-to-female ratios and survival rates. Decreased competition for forage through removals may instead allow population growth, which then drives the need to remove more animals.

To fix the problem, in addition to modifying removals, the NAS also recommended a fertility control campaign to control the horse and burro population. Birth control vaccines that prevent fertilization for females and chemical vasectomies for males, would be coupled with cross-breeding animals from different management areas to maintain diversity.

How "wild" the resulting population of neutered-and-bred horses and burros will be is an open question. But the herds have long been maintained more as museum exhibits of the wildness-that-was than as actual free-roaming beasts. Better management could have the benefit of being less self-defeating and more cost-effective in maintaining the populations. It would certainly be better than just fueling more population growth and spending ever-greater resources to warehouse or slaughter the results.

The deal that was presented to BLM last week is supposed to achieve just that—better management of the not-so-wild horse and burro herds, bringing together competing groups and interests that have clashed over the issue for decades. Nonetheless, controversy continues.

On one side is the American Society for the Prevention of Cruelty to Animals (ASPCA), which calls the new agreement "a powerful, non-lethal path forward for these imperiled icons of the American West," and The Humane Society of the United States (HSUS). The National Cattlemen's Beef Association, Public Lands Council, American Farm Bureau Federation, and Society for Range Management have also signed on to the plan.

But others organizations aren't convinced. Friends of Animals President Priscilla Feral accused ASPCA and HSUS of "throw[ing] in the towel when it comes to protecting America's wild horses" by "capitulating to the Bureau of Land Management."

An American Wild Horse Campaign statement called it "a bad deal [that] violates the Statement of Principles and Recommendations signed by more than 100 horse organizations." The group complains that ranchers benefit the most, large-scale roundups will continue, and the agreement neglects to specify the most effective fertility-control methods, such as vaccines.

So the debate is only settled-ish, pending an assessment of the results in the years to come. But for now, federal officials have demonstrated yet again that they can mismanage anything—even herds of wild animals—into a public policy mess.