Plus: A young adult novelist changes her mind about capitulating to the sensitivity mob. 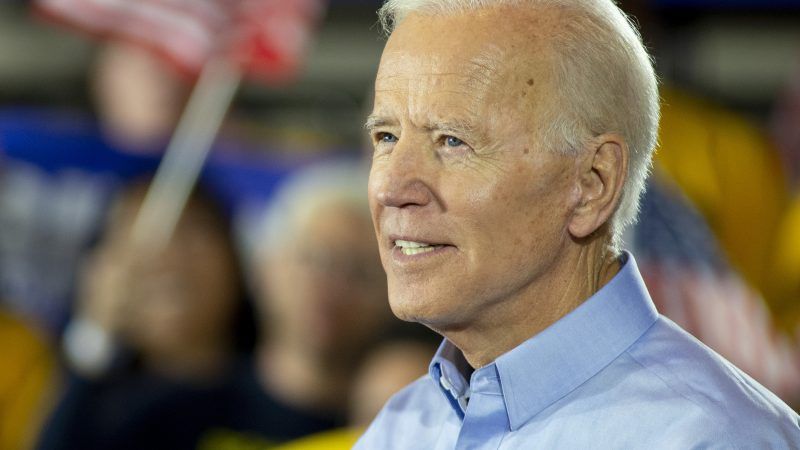 "I make no apologies," Biden told his audience at the Teamsters Hall in Pittsburgh. "I am a union man."

He thanked United Steelworkers, the American Federation of Teachers, the Service Employees International Union, and the International Association of Fire Fighters for attending.

It's obvious that if he were to win the primary, Biden's general election strategy would revolve around winning Pennsylvania, Wisconsin, and Michigan—three states where Trump's unique appeal to certain rank-and-file union members essentially won him the election. On Twitter, the president countered that "dues crazy union leadership" may be in the tank for the Democrats, but "the members love Trump."

Biden is currently enjoying a popularity surge among the voters he needs to win the primary. A new poll has him at 36 percent. Bernie Sanders is at 22 percent, followed by Elizabeth Warren at 9 percent and Pete Buttigieg at 8 percent. According to Morning Consult:

Biden's popularity has stayed steady, even amid a string of unflattering news stories in recent months, including his physical contact with women and a resurfaced debate over his handling of the 1991 Supreme Court confirmation hearings involving Anita Hill and Clarence Thomas when he was chairman of the Senate Judiciary Committee.

Any concerns that those stories may dampen his support with women and black women is not yet borne out by the data. If anything, Biden's advantage over the field relies heavily on edges with those groups: Among women overall, Biden jumped 8 points in the last week, to 38 percent — driven by a 7-point bump with white women (to 36 percent) and a 10-point jump with black women, to 47 percent.

Amelie Wen Zhao has decided to move forward with publication of her debut novel Blood Heir after all. Previously, she had canceled its release because several reviewers in the young adult literary community had branded it racist.

When these accusations first emerged several weeks ago, they struck both New York magazine's Jesse Singal and Vulture's Kat Rosenfield as ill-founded. Zhao's book concerns a fictional princess with magic powers, and is inspired by the tragedy of Anastasia Romanov. Zhao, an Asian immigrant, includes Russian themes, and a significant part of Blood Heir deals with forced labor. But some "sensitivity reviewers" decided that Zhao was really writing about American chattel slavery, having culturally appropriated this aspect of African history. "Racist ass writers, like Amélie Wen Zhao, who literally take Black narratives and force it into Russia when that shit NEVER happened in history—you're going to be held accountable," one early reviewer promised.

This is a wildly off-base criticism, of course. Slavery is not some unique phenomenon that only occurred in the American South; virtually every human society since the dawn of civilization has grappled with slavery—including Russia, where serfdom was not abolished until 1861.

In any case, it's good that Zhao has decided to publish the book, although she has apparently revised it to be more pleasing to the hyper-woke, according to The New York Times:

After Zhao decided she wanted to release the book, she and her publisher sought feedback from scholars and sensitivity readers in an effort to resolve any ambiguity around the type of indentured labor depicted. They had academics from different multicultural backgrounds, as well as one who studies human trafficking in Asia, evaluate the text, and Zhao added new material and made changes based on their comments. They had additional sensitivity readers vet the book for racial and other stereotypes.

But Zhao and her publisher seem more excited than wary that readers will have a chance to evaluate the book for themselves.

"We ultimately think our Y.A. readers are very smart," Marino said. "They can read what they want to read and use their critical thinking skills to work through it."

In all likelihood, most readers would have been perfectly satisfied with the book in its original form. Callout culture's squeakiest wheels make a lot of noise but are few in number.

Burger King is bringing its Impossible Whopper—a hamburger made from 0 percent meat—to all locations nationwide after a successful test launch in St. Louis, Missouri. According to Vox:

The plan for nationwide distribution is further evidence of plant-based meat going mainstream — a huge deal for those who want to see meat alternatives replace actual meat because of concerns over animal cruelty or climate change. If this keeps scaling up, it could help save hundreds of thousands of animals from suffering on factory farms, and it could fight global warming by reducing the number of methane-producing cattle. It could also combat other problems related to our factory-farming system, like antibiotic resistance.

Burger King's announcement caps a month of incredible growth for the alternative meat movement. Earlier this month, Del Taco announced it's partnering with Beyond Meat to offer new meatless tacos. And Qdoba announced that all 730 of its locations will offer Impossible Foods' plant-based meat alternative.