The Immorality of Student Loan Forgiveness and Free College

If you or your parents can afford to pay your way, you should. 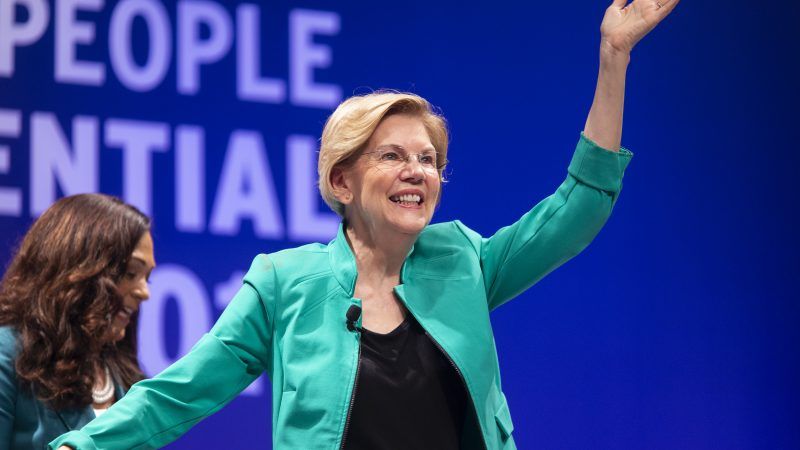 So now college should be free in the same way K–12 education is. That's what most (though not all) of the Democratic presidential candidates are saying, with Massachusetts Sen. Elizabeth Warren offering the most-detailed plan to make tuition at public universities free, forgiving "95 percent" of existing student debt, and increasing the amount of money for Pell grants and historically black colleges and universities. Ironically, the push for "free" college is coming at a time when a historically high percentage—about 70 percent—of recent high-school graduates are already enrolling in college. College has somehow become so unaffordable and remote that more and more people are attending.

"This is the kind of big, structural change we need to make sure our kids have opportunity in this country," says Warren in a video she posted at Twitter. But just like Bernie Sanders's routine and misleading invocation of "people with $300,000 in student debt," Warren's plan doesn't just misrepresent the impact of student loans on the individual level and the historically high availability of access to higher education; it's one more step toward an America where the people who benefit from something get somebody else to pay for it. Above and beyond any financial considerations, that's a bad attitude to inculcate.

Warren would pay for her plan with an "Ultra-Millionaire Tax" on the 75,000 richest households in America, which she says would raise $2.75 trillion over a decade. As Peter Suderman has noted, "European countries that have imposed wealth taxes have largely given up on them; of the dozen OECD nations that had wealth taxes in 1990, just four still have the tax on the books." Warren also keeps promising to spend her new revenue on all sorts of things, to a degree that there isn't enough money to cover her growing list of giveaways.

Warren's plan is of a piece with progressive Democrats pushing for more and more goods and services to be provided by the government regardless of citizens' ability to cover their own costs. From a financial perspective, this sort of reflex is flatly unsustainable in a country that has already run up a $22 trillion tab and whose rising debt service will cost more than Medicaid next year and more than military spending in 2023. But there's also a moral argument to be made here: Why shouldn't we expect people who can pay for their own education, health care, and retirement to do so? And why shouldn't we expect people who benefit from something to fund all or most of their activity?

I'm calling for universal free college and the cancellation of student loan debt for more than 95% of Americans. This is the kind of big, structural change we need to make sure our kids have opportunity in this country. pic.twitter.com/KERw3APDMo

When it comes to college, high-school grads are enrolling at historically high rates, a sign that they have access to higher education. Using three-year moving averages (which smooth out minor fluctuations) the National Center for Education Statistics (NCES) reports that a record-high level 69.5 percent of "recent high-school completers" are enrolled in college. In 1975, the first year for which data is presented, the figure was 49.1 percent. In 1980, it was 50.8 percent. Warren can rhapsodize about how much cheaper college tuition used to be, but the reality is that far higher percentages of people are attending college than ever before. In fact, according to NCES, a record high level of students from low-income households are attending college right out of a high school. The three-year moving average for low-income students in 2016, the latest year for which data is presented, was an unprecedented 67.1 percent—more than double the figure in 1980.

And despite claims that "we're crushing an entire generation with student-loan debt," the typical undergrad borrower is doing fine. About 70 percent of the Class of 2018 graduated with some debt, and their median monthly payment is $222. The overall amount of student debt is gigantic—about $1.5 trillion—but when you break it down to what the typical borrower is actually on the hook for, the picture changes dramatically.

If college students have skin in their own game, they'll think more seriously about going to college in the first place and be more motivated to be serious and to finish. Also, one reason why tuition hikes have outpaced the general rate of inflation is that government-guaranteed student loans have helped to goose the costs. Meanwhile, the returns to a college degree remain immense even if they have flattened a bit in recent years. In a 2016 paper for the Federal Reserve Bank of San Francisco, Robert G. Valletta found that in 1980, the average worker with a high school degree made $16.33 per hour while the average worker with a college degree made $22.85. In 2015, the high school grad made $17.98 per hour while the college grad averaged $30.93. (All those figures are in 2015 dollars.) While studies of the effect of college on take-home pay vary, all show large gains and lower unemployment rates. If you're going to make as much as a million extra dollars over your working lifetime by getting a B.A., you should be the one footing the bill.

There's nothing wrong with asking people who benefit from something to shoulder all or part of the costs. Our national finances are falling apart largely because we keep insisting that all benefits be universal and that nobody pay their own way when it comes to big-ticket items such as health care, education, and retirement. One result in those areas are markets that don't function as efficiently as they would otherwise. Another is a pervasive belief that we can always pass the costs of our choices onto other people. Our government is trying to be all things to all people It would be better to let it focus on helping people who can't help themselves, and let the rest of us get on our with our own lives.