It’s time to stop freaking out about humanity's imminent demise. 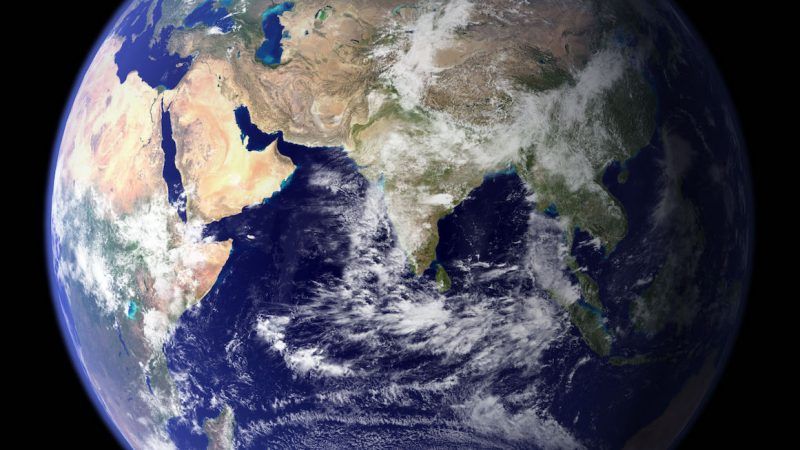 As activists around the world recently celebrated Earth Day with warnings about the awful state of our planet, now seems like the right time to share the good news that actually—contrary to countless dire predictions—we're not running out of resources. In fact, the late economist and scholar Julian Simon was right: People again and again have innovated "their way out of resource shortages."

As Mark Perry of the American Enterprise Institute reminds us in an article about "18 spectacularly wrong predictions made around the time of first Earth Day in 1970," back in 1969, Stanford University biologist Paul Ehrlich wrote that "Most of the people who are going to die in the greatest cataclysm in the history of man have already been born." He added that by 1975, "some experts feel that food shortages will have escalated the present level of world hunger and starvation into famines of unbelievable proportions." In 1970, he revised his prediction for the worse to warn us, as Perry writes, that "between 1980 and 1989, some 4 billion people, including 65 million Americans, would perish in the 'Great Die-Off.'"

In 1972, a group known as the Club of Rome made similarly apocalyptic predictions.

In response, Dr. Simon, who at the time of his death in 1998 was an economics professor at the University of Maryland, argued that these predictions were wholly unwarranted. There would be no extinction from starvation. Simon recognized that people are the ultimate resource and would innovate their way toward greater abundance.

The bet itself was meant to determine whether commodity prices would rise or fall over the period from 1980-1990. If they fell, that would mean that the commodities became more abundant. If instead they rose, that would have signaled that commodities became scarcer. Simon was willing to bet that over any number of years, inflation-adjusted commodity prices would fall.

Simon won that bet. During the 1980s, the prices of the commodities in the Simon-Ehrlich bet decreased. Ehrlich's dire prediction thankfully never came to pass. Some have argued that had they picked the following decade, Ehrlich may have won. That said, the consensus is that when looking at an index of all commodities over a 100-year period, there's a clear decline in prices with a few short-lived periods of increase.

This failure didn't stop Ehrlich and others from continuing to issue similarly apocalyptic predictions up to this day. In response, two scholars have picked up the Simon torch to, once again, closely study the issue. The true heirs of the great humanist and optimist Simon, Marian Tupy from the Cato Institute and Gale Pooley from Brigham Young University-Hawaii, have launched The Simon Abundance Index, which offers a new and better way to measure resource availability "using the latest price data for 50 foundational commodities" (as opposed to five in the Simon-Ehrlich wager).

They base their measure on three original concepts:

1. The time-price of commodities, or "the amount of time that an average human has to work in order to earn enough money to buy a commodity."

2. The price elasticity of population, which is a measure of whether population growth indeed increases the availability of resources.

3. The Simon Abundance Index, which "measures the change in abundance of resources over a period of time."

Based on their measurements, Pooley and Tupy confirm Simon's admittedly counter-intuitive thesis—the faster a population grows, the greater the availability of natural resources. As they beautifully conclude, "The world is a closed system in the way that a piano is a closed system. The instrument has only 88 notes, but those notes can be played in a nearly infinite variety of ways. The same applies to our planet. The Earth's atoms may be fixed, but the possible combinations of those atoms are infinite. What matters, then, is not the physical limits of our planet, but human freedom to experiment and reimagine the use of resources that we have."

So, cheer up! And stop freaking out about predictions of our imminent demise.