Will 2020 Democrats Spook the Stock Market?

If so, it could undercut one of Trump's best re-election selling points: the strong economy. 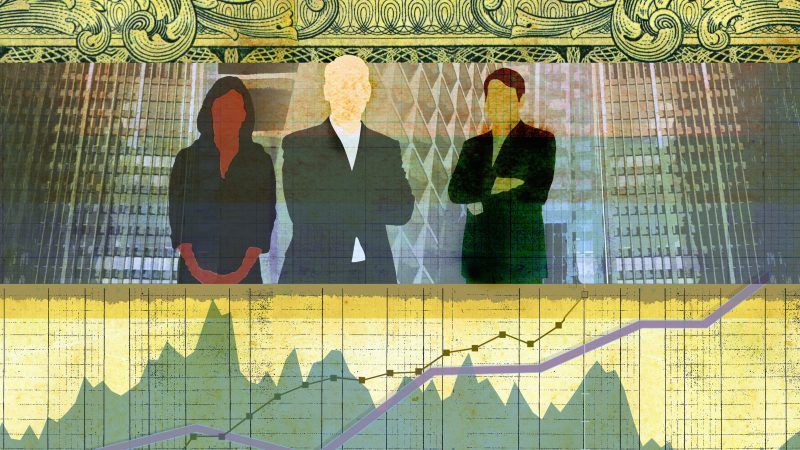 "Political risk" used to be something American investors worried about in connection with foreign countries. It had to do with assessing the likelihood that a dictator would seize power and decide to nationalize the oil industry or the banks. Or that a war would break out and close shipping lanes.

Increasingly, though—and especially headed into the 2020 presidential election—political risk is looming over the U.S. domestic economy and financial markets.

I'm not talking about the risk of President Trump starting a trade war with China, Canada, Mexico, or Europe, though investors have reacted to that threat at times, too.

The bigger concern is the chance that a Democrat will spook the stock markets by appearing likely to defeat President Trump. In a worst-case scenario for Trump, this can even be a self-fulfilling prophecy: the stock market declines in anticipation of his potentially losing, and the decline then undercuts one of Trump's best re-election selling points, the strong economy.

A big part of the story is taxes. An underappreciated political fact of the past 30 years in America is that every president has changed the tax rates. In the three decades between 1988 and 2018 America had six presidents. The best of them, Ronald Reagan, left office with the top individual income tax rate at the lowest level: 28 percetnt. George H.W. Bush raised it to 31 percent. Bill Clinton raised it to 39.6 percent. George W. Bush lowered it to 35 percent. Barack Obama raised it back to 39.6 percent. Donald Trump lowered it to 37 percent.

For investors, though, a U.S. tax increase has a similar effect to a third-world dictator seizing a previously profitable private enterprise. It amounts to the government taking property away from the people who had previously thought they owned it. That does not inspire confidence. Instead, it erodes it.

Ideally, property rights are fixed and based on a predictable rule of law. The oscillating tax rates instead feed the perception that how much of what you earn the government will allow you to keep is dependent on which political party happens to occupy the White House.

One needn't be an expert soothsayer to predict that if a Democrat defeats Trump in the 2020 presidential election, taxes will increase. Joe Biden was vice president during the Obama tax increases. Bernie Sanders is a self-described socialist who ran in 2016 with a plan to raise the top federal individual income tax rate to 54.2 percent and to tax dividends and capital gains as ordinary income. Pete Buttigieg has said "Tax cuts for the wealthiest…some of 'em are gonna have to be reversed." Elizabeth Warren has proposed raising taxes by $2.75 trillion over ten years with a new "wealth tax."

Beyond the overall threat posed by tax increases, the Democrats also could endanger specific sectors of the economy.

A "green new deal" or similar efforts to combat climate change by rapidly changing American energy policy might be good for electric car companies, solar-panel installers, and wind-turbine technicians, but trouble if you own an oil or gas pipeline, refinery, or drilling company.

Medicare-for-all or similar pushes for increased government involvement in health care could hurt profits of health insurance companies and the pharmaceutical industry. Axios reports that even Republicans are getting ready to gang up on the drug companies, raising the possibility of a bipartisan deal this year on the issue. The New York Times paraphrased a Goldman Sachs analyst, Stephen Tanal, as saying that "fear of government intervention would probably weigh on health care share prices 'perhaps until the presidential election itself.'"

Democrats respond to these concerns by citing analyses that the stock market does well in Democratic administrations, or by warning that Republican tax cuts, if "paid for" by borrowing to cover deficits, could eventually precipitate a financial crisis. Some of them also argue that the stock market or the overall economy is driven by business cycles largely unrelated to marginal tax rates.

What the studies about stock market performance during Democratic administrations don't account for, though, are expectations-based sell-offs that precede those administrations. So, for example, looking at the performance of the stock market during President Obama's term would ignore the nearly 20 percent plunge that took place after Obama was elected but before he was inaugurated, and it'd give Obama credit for the 6 percent rise between when President Trump was elected and when Trump was inaugurated. Control of Congress matters, too—some of the stock market gains during the Clinton and Obama years were racked up when Republicans in Congress put some constraints on Democrats in the White House.

U.S. politics aren't the only factor affecting stock prices. Monetary policy and global trends matter, too. Long-term savers think about periods longer than a presidential term. If Trump is re-elected, the tax plans of Sanders and Warren will be irrelevant. But until Election Day, investors who entirely ignore U.S. political risk do so at their own peril.