The feds aren't the only ones capable of designing cringe-worthy mascots. 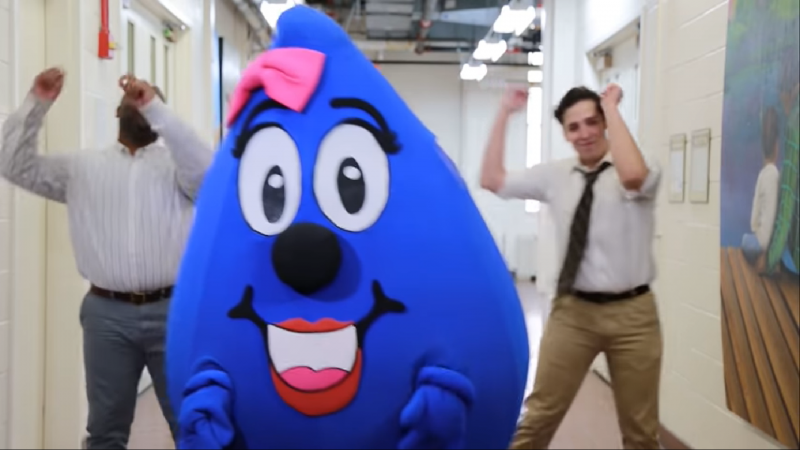 Say what you will about the various government bodies that inhabit Washington, D.C., but damn do they know how to come up with some cringe-worthy mascots.

Back in January, Reason's Eric Boehm wrote about the Green Reaper, a proposed mascot for the U.S. Department of Energy (DOE), which was supposed to warn children about the dangers of environmental catastrophes.

The "ridiculous and terrifying" costume for the Green Reaper cost taxpayers a cool $5,000 to procure, not counting whatever staff time and resources went into creating and designing the Reaper.

As it turns out, it's not just the feds that can play this game. See, for instance, area public utility company D.C. Water's equally creepy/charming mascot Wendy the Water Drop.

Technically in existence since at least 2010, Wendy rocketed to fame in the past few weeks thanks to a DCist article showcasing the mascot's music video "…Chlorinate Me One More Time."

The subject matter of the video—a public service announcement about how D.C. Water is temporarily switching the disinfectant used in drinking water from chloramine to chlorine—is rather forgettable. The music video itself—which involve the always-smiling Wendy and two backup dancers cutting a rug to the tune of Britney Spears' 'Hit Me Baby One More Time'—stays with you.

Released in 2018, the video was rescued from obscurity by DCist's writeup. The article notes that the video had only racked up 300 or so views. It now has close to 10,000.

The video itself was paid for out of D.C. Water's general communications budget, so we'll unfortunately never know how much it cost to produce. A records request from Reason, however, revealed a 2016 receipt putting the cost of the costume at $3,695 plus another $175 charge to ship it from a manufacturer in Wisconsin.

A D.C. Water media representative told Reason that the mascot is a great way to engage customers, particularly children. Its effectiveness at reaching adults might be a different matter.

Perhaps it's unfair to dismiss the Wendy the Water Droplet's earned media. The mascot does, after all, make appearances at public events to glad-hand and pose for pictures. But when you're a government-run monopoly selling an essential product, one would think you could skimp on eye-catching mascots.