The Supreme Court allowed the policy to move forward, but the fight is far from over. 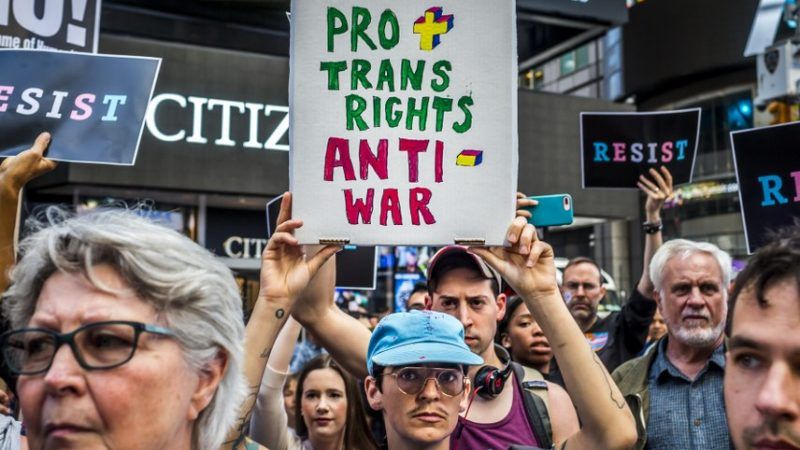 It has been two years since President Donald Trump abruptly announced in a tweet that he was going to implement a ban on transgender people serving openly in the military. This came out of the blue, and it caught many people (including military leaders) by surprise.

Today the policy is being launched, even though several legal challenges to it remain unresolved.

The ban itself is a stranger variation of the old "Don't Ask, Don't Tell" policy that allowed gay troops to serve as long as they remained in the closet. Transgender people may join and continue to serve in the military as long as they present themselves as their biological sex and do not have a history of diagnosis with gender dysphoria. Transgender troops currently in the military are going to be allowed to stay, even if they receive transgender-related medical treatment (which the military will not pay for).

It's a bizarre compromise probably intended to counter one of the legal arguments presented by challengers to the ban: that it violates the Fifth Amendment due process rights of transgender troops already serving. The military under President Barack Obama implemented a plan to allow transgender people to serve openly in the military. Changing the rules and booting them once they've started outing themselves would be a problem.

Several federal courts determined that these lawsuits had merit and blocked the administration from implementing its plans. The Trump administration went to the Supreme Court to get the injunction lifted. In January, the justices sided 5–4 with the administration and allowed the plan to move forward.

To be clear, this doesn't mean the Trump has won this fight. The legal fights haven't ended; the Supreme Court decision just allows Trump to implement this policy while the challenges continue. Openly transgender troops within the military may continue to serve. Those who want to join or those who have joined but have not come out as transgender have to continue presenting as their biological sex.

Opponents of the policy argue that there's no evidence that allowing transgender troops to serve openly is causing any problems to troop morale or readiness.

Diane Mazur of the Palm Center, which studies LGBT military policies, worries that despite what the White House claims in its memo, the underlying service guidelines actually will allow the military to dump transgender members in active service. Mazur notes in Politico that commanders have the

authority to order a mental-health evaluation if they suspect a member is gender dysphoric. Continued service would then depend on whether military authorities believe that an individual is "unable or unwilling" to adhere to standards based on birth sex. Fitness for duty is irrelevant.

In practical terms, this means that if you're serving in uniform and it becomes known that you are transgender, your commander has authority to start a process that can end in your dismissal. It's out of your control. Hiding your identity—rather than serving openly as who you are—is the only safe option.

So the whole thing is a big mess. If an active member of the military is booted for being transgender, that's certain to launch even more lawsuits. And if transgender troops aren't booted, that's essentially evidence that the policy itself is unneeded and doesn't serve a real purpose other than to discriminate.