The WikiLeaks founder has few if any defenders in Congress. 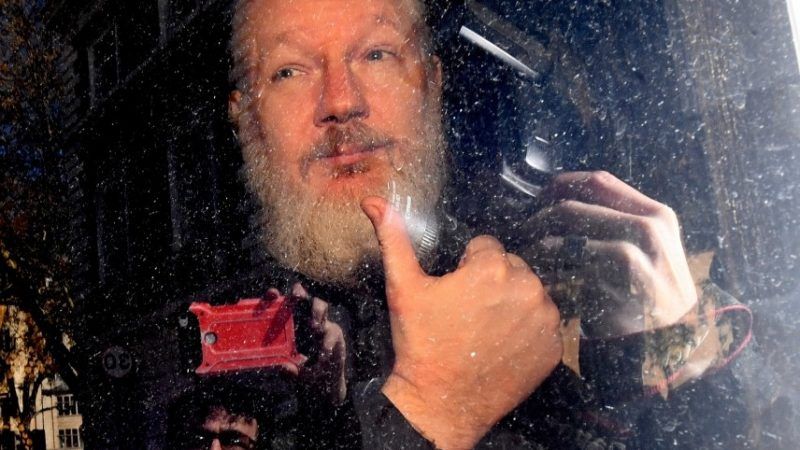 The bipartisan consensus following WikiLeaks founder Julian Assange's arrest Thursday morning was that justice is finally being served. Few, if any, politicians defended Assange or suggested that it might be wrong to prosecute him.

British police arrested Assange, who had been living in the Ecuadorian embassy in London after Ecuadorian officials reportedly got tired of harboring him. Federal prosecutors in the U.S. are now trying to extradite Assange so he can face a "charge of conspiracy to commit computer intrusion for agreeing to break a password to a classified U.S. government computer," according to a Department of Justice press release.

The response from elected officials in Washington, D.C., was almost universally celebratory. While President Donald Trump simply said he "know[s] nothing about WikiLeaks," plenty of Republican and Democratic members of Congress praised Assange's arrest.

"I'm glad to see the wheels of justice are finally turning when it comes to Julian Assange," tweeted Sen. Lindsey Graham (R–S.C.), chairman of the Senate Judiciary Committee. "In my book, he has NEVER been a hero."

Lawmakers pointed to Assange's involvement in leaking thousands of Democratic National Committee emails prior to the 2016 presidential election. Assange has been accused of working with the Russian government to release the messages.

"Whatever Julian Assange's intentions were for WikiLeaks, what he's become is a direct participant in Russian efforts to weaken the West and undermine American security," added one of Graham's Democratic colleagues, Sen. Mark Warner of Virginia. "I hope British courts will quickly transfer him to U.S. custody so he can finally get the justice he deserves."

It's worth noting, as Reason's Nick Gillespie did Thursday morning, that there are indeed valid questions about Assange's relationship with the Russian government. However, the charge he's currently facing relates to WikiLeaks' efforts to release hundreds of thousands of classified documents about the U.S. wars in Iraq and Afghanistan and has nothing to do with the 2016 election. Back in 2010, prosecutors say Assange helped crack a password stored on government computers in order to access classified information.

"Julian Assange has long been a wicked tool of Vladimir Putin and the Russian intelligence services. He deserves to spend the rest of his life in prison," Sen. Ben Sasse (R–Neb.) wrote on Twitter.

Sen. Cory Gardner (R–Colo.), meanwhile, praised British police for taking Assange into custody and called for Assange to be extradited so he could "answer for aiding & abetting a foreign power to undermine US democracy & laws."

Sen. Joe Manchin (D–W.Va.) put it even more bluntly. "He is our property, and we can get the facts and the truth from him," Manchin said on CNN's New Day.

Republican Sens. Tom Cotton (Ark.) and Richard Burr (N.C.) also criticized Assange. Cotton claimed he "endangered the lives of American troops in a time of war," and said that "since Assange is used to living inside, I'm sure he'll be prepared for federal prison."

Burr, meanwhile, said Assange "engaged in a conspiracy to steal classified information, putting millions of lives at risk all over the world."

Members of the House expressed similar sentiments. Rep. Eliot Engel (D–N.Y.), chairman of the House Foreign Affairs Committee, called Assange "a tool of Vladimir Putin and the Russian intelligence service," and expressed hope that he'll be extradited to the U.S. to "finally face justice."

Rep. Sheila Jackson Lee (D–Fla.), referred to WikiLeaks as "a menace to American national security" and said Assange's arrest "is an important development and a condition precedent for justice to prevail in this matter.

Perhaps just as notable as the widespread cheering of Assange's arrest was the initial silence from advocates for government transparency and critics of U.S. intervention abroad.

Libertarian-leaning Sen. Rand Paul (R–Ky.), for instance, suggested in August that Assange could be given immunity if he testified before Congress about the DNC leaks. Reason reached out to Paul's office for comment on Assange's arrest, but did not receive a response in time for publication.

Rep. Tulsi Gabbard (D–Hawaii), a 2020 presidential candidate, said in February that "the information that has been put out [by WikiLeaks] has exposed a lot of things that have been happening that the American people were not aware of and have spurred some necessary change there." A spokesperson for Gabbard did not provide an official response to Assange's arrest prior to publication.

Several hours after publication of this article, Gabbard said on CNN that WikiLeaks and Assange have "informed the American people about actions that were taking place that they should be aware of."

"What's happening here is unfortunately…some form of retaliation coming from the government," she added.

Reason also reached out to the offices of Reps. Justin Amash (R–Mich.) and Thomas Massie (R–Ky.), as well as Sen. Mike Lee (R–Utah). None of them provided a response.

The widespread criticism of Assange and the silence of some lawmakers highlights the bipartisan consensus that Assange is a criminal who deserves to be locked up. This perception can be dangerous because it ignores the fact that the information WikiLeaks has released, particularly in regard to America's actions abroad, has shone a light on important secrets that regular citizens otherwise wouldn't have known about.

It's easy to dunk on Assange, but it's important we remember his actions have, in fact, helped erode government secrecy and shined a bright light on the violent excesses of the American government.

This post has been updated with President Trump's Thursday comments on WikiLeaks, as well as Rep. Gabbard's remarks on CNN.