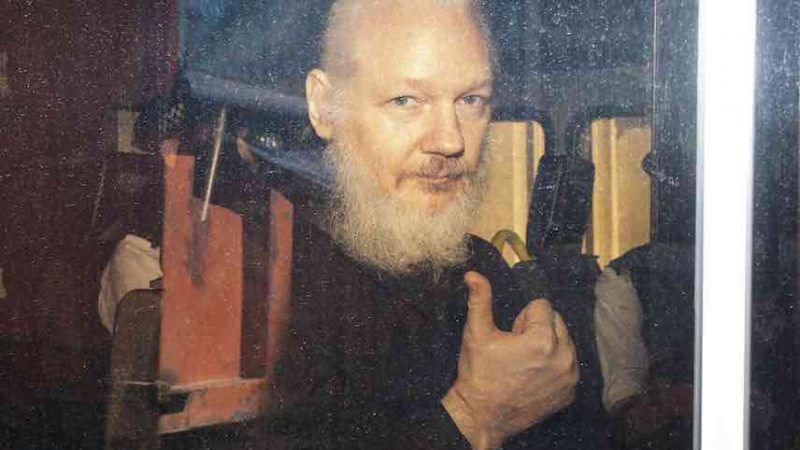 Police officers have arrested WikiLeaks founder Julian Assange and taken him into custody.

Assange had been living in the Ecuadorean embassy in London for the past 6 years, using diplomatic immunity protections to shield himself from arrest. But Ecuadorean officials had grown weary of the arrangement, in part because Assange continued to involve himself in world affairs, and also because he had become a difficult houseguest. According to The New York Times:

President Lenín Moreno of Ecuador said on Twitter that his country had decided to stop sheltering Mr. Assange after "his repeated violations to international conventions and daily-life protocols," a decision that cleared the way for the British authorities to detain him.

The relationship between Mr. Assange and Ecuador has been a rocky one, even as it offered him refuge and even citizenship, and WikiLeaks said last Friday that Ecuador "already has an agreement with the UK for his arrest" and predicted that Mr. Assange would be expelled from the embassy "within 'hours to days.' "

Video footage showed a bearded Mr. Assange being taken down the steps of the red brick embassy in the wealthy area of Knightsbridge in central London by several plainclothes police officers and put into a gray police truck that was waiting to take him away.

Here is video footage of the arrest:

Assange could face extradition to the U.S., where authorities wish to prosecute him for leaking classified documents. He could also be compelled to give information regarding the release of Democratic National Committee emails in 2016 and whether Russia was responsible for the hack.

Surveillance whistleblower Edward Snowden has condemned the British and Ecuadorean authorities for violating United Nations human rights decrees. "The United Nations formally ruled his detention to be arbitrary, a violation of human rights," writes Snowden. "They have repeatedly issued statements calling for him to walk free—including very recently."

The Intercept's Glenn Greenwald is also criticizing the Trump administration for its willingness to prosecute Assange. "The Obama [Department of Justice] concluded that prosecuting WikiLeaks and Assange for publishing documents would pose a grave threat to press freedom," he wrote. "Dems who spent 2 years feigning concerns over press freedom but who now cheer the Trump DOJ for this are beneath contempt."

Indeed, bringing charges against Assange for publishing the secret documents he obtained would set a very dangerous precedent, since this is something journalists do all the time. As Bradley P. Moss wrote last year in The Atlantic:

If Assange can be prosecuted merely for publishing leaked classified documents, every single media outlet is at risk of prosecution for doing the exact same thing. There would be no way to differentiate a traditional media outlet such as The New York Times or The Atlantic from an entity like WikiLeaks without involving the government and the courts in the formulation of a legal definition of what qualifies as a part of the press. Is it only a traditional outlet like a newspaper or a television network? What about legal bloggers who do freelance work? Or how about online-only platforms? Is one more deserving of First Amendment protection than the other? This is not something I want the government deciding in a criminal context.

Here is the Justice Department's statement.

A student has filed a lawsuit against Syrcause University for abridging his due process and free speech rights, which led to university represenatives admitting in court that the institution doesn't actually believe in protecting free speech. According to the Foundation for Individual Rights in Education:

In court documents recently filed by Syracuse University in response to a student's lawsuit alleging free speech and due process violations, SU admits that it does not promise its students free speech. The admission is the culmination of SU's disappointing history of violating its students' expressive freedoms.

SU's concession puts in words what FIRE has known for a while—SU simply does not recognize the expressive rights of its students. Although SU is a private university not bound by the First Amendment, it makes institutional promises to respect student expression, stating that it "is committed to the principle that freedom of discussion is essential to the search for truth and, consequently, welcomes and encourages the expression of dissent." And while many private institutions at least pretend to follow such promises, SU decided that even that was going too far.

Sen. Bernie Sanders (I–Vt.) has faced a lot of questions about when and whether he will release his tax returns. CNN recently asked him about his wealth, and the democratic socialist replied, "I wrote a best-selling book. If you write a best-selling book, you can be a millionaire, too." Work hard, create something people like, and make money—it sure sounds like Sanders appreciates capitalism more than he lets on, at least when he's the beneficiary.

Hardcore Bernie fans on the socialist left have been grappling with Sanders' declaration ever since. Splinter's Libby Watson tweets that Sanders making money off book sales might be OK because he's not exploiting anyone. (I suspect she forgets that a whole lot of books are sold by this company.) "But in general there's a conversation to be had about how much wealth you can have before you're bad, and I don't know that a million dollars in today's money is it," she writes.

I am running for President of the United States of America.

I see you. I hear you. I'm for you. I AM you. pic.twitter.com/qRcrBvtdAD

It's almost as if someone said "No one has less knowledge of science, a higher opinion of himself, and a bigger carbon footprint than Al Gore" and Kerry replies "hold my champagne, I'm going to testify as a climate change expert." https://t.co/sSCbKMCuZK

Update: This article initially misstated how long Assange has been living inside the embassy.