Pete Buttigieg Is the Most Interesting Democrat Running for President

Buttigieg urging candidates to "talk about freedom more" is a positive development not just for the Democrats but for the country. 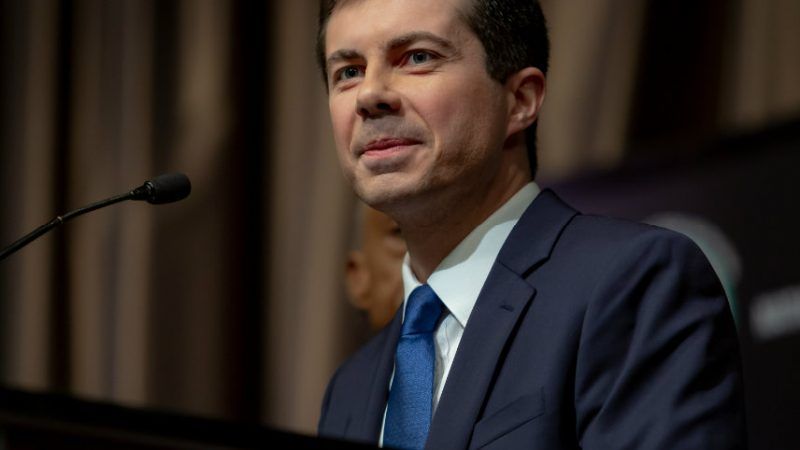 The most interesting Democrat running for president may just be Pete Buttigieg, the 37-year-old, gay mayor of South Bend, Indiana.

He visited Boston earlier this month, and I got to see him firsthand during a small session with reporters and an appearance before a crowd of more than 1,000 at Northeastern University.

In more than a few moments, he was downright impressive.

Facing a question from a tenant-rights activist complaining about Northeastern fueling "gentrification," he pivoted to an answer about affordable housing that included the words "rethinking exclusionary zoning."

That is a big deal coming from a Democratic politician. Left-leaning economists and journalists such as Eduardo Porter, Paul Krugman, and Lawrence Summers have been making this point about zoning restrictions artificially constraining the supply of housing. It's ideologically consistent with libertarian aversion to regulatory interference in free markets. But politicians have been slow to seize the issue. Another Democratic presidential candidate, Beto O'Rourke, had earlier handled a housing affordability question by talking about aggressive antidiscrimination enforcement by the federal Department of Housing and Urban Development, leaving me wishing he'd at least also mentioned something about zoning.

Buttigieg's housing answer, while brief, also made another smart point: that housing policy needs to take into account regional variations. In South Bend, he said, it's a problem that houses selling for $30,000 or $40,000 are too inexpensive to qualify for conventional mortgage financing. In Boston, that money won't purchase an outdoor parking spot, let alone a single-family house. So the affordability question may not be answered with a one-size-fits-all Washington-imposed solution.

I've frequently written that one of the benefits of the Trump era is Democrats discovering the merits of decentralization. It's nice to see one of the party's presidential candidates talking about this.

Deregulation and decentralization are a good start. What else does Buttigieg have to offer voters who might not otherwise tend to consider a self-described progressive?

He talks about religion as a source of "community and morality and spirituality."

And he talks about freedom. "We need to start to talk about freedom more on our side of the aisle," he said. He says this in response to a question about a faculty labor union, suggesting that benefits such as retirement and health care should move away from "being entirely dependent on your employer." That's a bit of a straw man—Social Security and individual retirement accounts already exist. And while employer-provided healthcare has its flaws, the "Medicare for all who want it" as a "glide path toward single payer" program described by Buttigieg would have its own flaws, too.

Sometimes it's hard to tell whether Buttigieg's "talk about freedom more" is just rhetorical gloss, a marketing campaign to sell the same old tax-and-spend liberal program by borrowing language to suggest, inaccurately, that the freedom wouldn't be merely talked about but actually enjoyed by taxpayers.

What made me particularly nervous about this was when Buttigieg started saying things like, "Tax cuts for the wealthiest…some of 'em are gonna have to be reversed." Or complaining that the "neoliberal consensus" or "Reagan consensus" of the "last 40 years" has "absolutely failed us."

Other times, Buttigieg does a better job of connecting.

He's disarming with humor when he notes that before he came out, his two careers were the U.S. military and elected office in Indiana, neither of which were known to be particularly gay-friendly.

Asked a question about the experiments with universal basic income, he notes, "there's a lot more to work than income." He talks about identity and a sense of purpose and belonging. Along the way he mentions an assembly line in Indiana that used to make Hummers, the civilian version of the military Humvee, but has since been retooled to make the Mercedes R Class, a minivan-shaped vehicle not sold in America but exported to China. So American union auto workers are making German cars for Chinese customers.

One assembly-line anecdote, excellent as it is, isn't a trade or tariff policy. And the campaign is in its early days. Buttigieg will have his blunders, as he did Saturday in clumsily and publicly lecturing Benjamin Netanyahu about what is in Israeli interests, as if Buttigieg, from the safety of South Bend, is better positioned to know that than are the Israeli voters.

Early though it is, though, it's not too early to say that having Buttigieg in the presidential race urging "talk about freedom more" has the potential to be a positive development not just for the Democrats but for the country.