The Zoning Code Banned His Tall Fence, but Not the Naked Mannequin Party Behind It 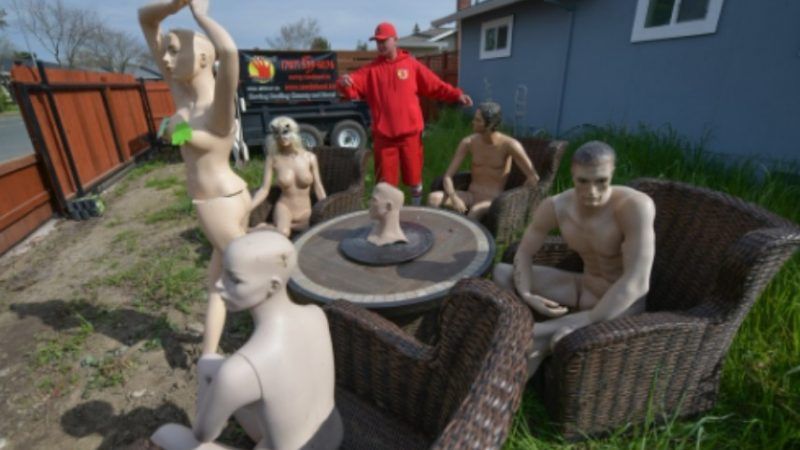 When the city of Santa Rosa, California, told Jason Windus he had to lower the fence around his home, he complied. But the Santa Rosa Code Enforcement Division probably couldn't have predicted his next move.

Windus set up multiple naked mannequin models in his yard. With the shortened fence, they're on full display for the entire neighborhood to see. And since they're just mannequins, it's not as though he's running afoul of any public indecency regulations.

"The way I see it is you can either cop a resentment or you can have some fun with it," Windus told NBC Bay Area. "There's no sense in getting angry."

It all started after Windus built a fence to keep his dogs from leaving his property, which is on a street corner. "It was a 6-foot fence, like everybody else's around here," he told The Press-Democrat. At least one neighbor wasn't a fan. A city spokesperson told KTVU someone filed a complaint last October regarding the fence. It was found to be in violation of the city code because it might block drivers' views of the intersection.

"They were going to fine me a lot of money if I didn't cut the fence down," Windus told KTVU. "I don't know who [the neighbor] is and I'm sure they're not going to come forward."

Windus shortened the fence to 3 feet. Incidentally, he happened to have several mannequins in his yard that he had obtained via his job running a moving company. "I couldn't bring myself to throw them away. I was going to use them for target practice," he told KTRK. It turned out they would come in handy.

"I guess the average person would get angry," Windus told KTRK. "I throw a naked party in my yard."

"You want to see the inside of my yard, now you get to," he added to NBC Bay Area. To top it all off, Windus set up a sign in his yard that reads: "Reserved seat for the nosey neighbor that complained about my fence to the city."

It's a noble sentiment, and one that neighbors seem to appreciate. (Multiple passersby expressed their amusement to various local outlets). While there are countless stories of the government getting in the way of citizens building what they want on their own property, it's not too often citizens respond the way Windus did.

Jason Windus. It's been four day since he put up the garden party.
"I'm waiting. If they didn't like the fence, how do they like this?" Neighbors love it. All except the one who initially complained. #Abc7now #santaRosa #SonomaCounty pic.twitter.com/eVYytalYvU

His response does draw some parallels to that of Ted Pelkey of Vermont, who couldn't get a permit to build an 8,000-square foot garage on his property. So he commissioned an artist to carve a 700-pound, wooden sculpture of the middle finger, and had it installed in his yard, complete with two floodlights so that it was visible 24/7.

Which is better: Naked mannequin party or giant middle finger? That's for you to decide.