In a New Yorker interview, the would-be primary challenger compares the president to Charles Lindbergh. 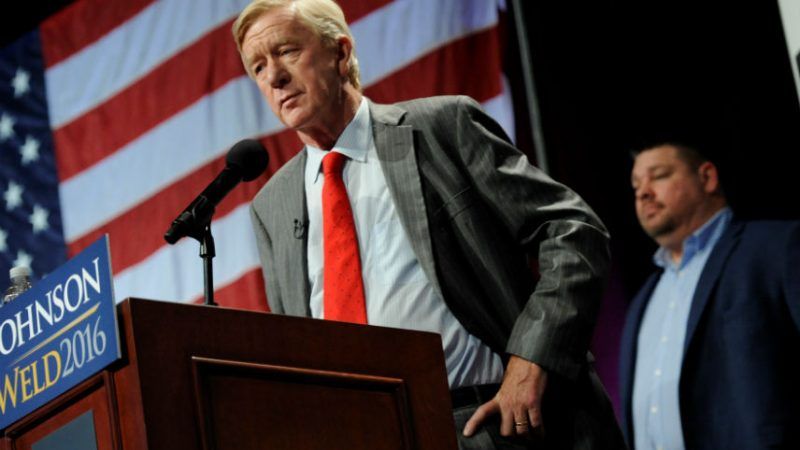 Three weeks into the exploratory phase of his potential primary challenge to President Donald Trump, former Massachusetts governor and 2016 Libertarian vice presidential nominee Bill Weld continues making the national media rounds, for instance telling MSNBC's Chuck Todd yesterday that it would be "unlikely" for him not to go through with a campaign. "I`m probably going to decide in the month of April," Weld said. "What would have prevented me would be just absolutely no support out there. But, you know, so far as I hear from anybody, it's 'Right on, right on.'"

One of Weld's more striking recent exchanges came with New Yorker Editor David Remnick, who was trying to understand why the GOP has "moved so far to the right." Excerpt:

[Remnick]: I think some Republicans have comforted themselves by thinking that Donald Trump is an aberration within the Party. But other people think that he's the logical end result of decades of the Party élite, the G.O.P. élite whipping up the base, whether it was the Tea Party movement or other aspects of the Party. And you've got this very, very strong racist strain that's come to the fore. How do you battle that? How do you kill it?

Just to be clear, you're putting the President of the United States in the same basket as the late head of the American Nazi Party. Am I correct? That's tough stuff.

I'm putting them in the same sentence, but, you know, I think the President, he makes no bones about the fact, he says "America First," which was Charles Lindbergh's fifth column before World War Two, and he says "I'm a nationalist." Well, it is the Party that took over in Nazi Germany in the nineteen-thirties. So that's the Nationalist Worker's Party.

The George Lincoln Rockwell anecdote is a reference to this January 2016 Trump tweet quoting the account WhiteGenocideTM, which had posted a photoshopped image of Jeb Bush begging outside Trump Tower. WhiteGenocideTM, since suspended by Twitter, included on its feed a picture of Rockwell.

According to Fortune's Ben Kharakh and Dan Primack, "Trump neither explained nor apologized for the retweet and then, three weeks later, he did it again. This subsequent retweet was quickly deleted, but just two days later Trump retweeted a different user named @EustaceFash, whose Twitter header image at the time also included the term 'white genocide.'" Campaign spokeswoman Hope Hicks told Fortune that "The retweets are based solely on the content, not the personal views of those individuals as they are not vetted, known or of interest to the candidate or the campaign."

While criticizing Trump over dodgy retweets and the etymology of "America First" feels pretty 2016, Weld has been accusing the president of dog-whistling for some time now. In a Reason Podcast interview last July, he said that Trump operatives would come to his rallies in 2016 holding "All lives matter" signs. "That is nothing but a dog whistle to the black haters and the white supremacists. Nothing but a dog whistle," he said. "In fact, the whole campaign was kind of a connected series of dog whistles. So I would take the mic and say, no, the correct answer to that question is 'Yes, Black lives do matter.' And that would kind of throw a wet blanket on the Trump guys."

When I asked Weld in April 2018 whether he had any regrets about vouching for Hillary Clinton on MSNBC one week before the election, part of his answer invoked the Trump/Nazi comparison: "I did express the fact that I thought that she was maybe more palatable than the Republican candidate, whom I've compared to certain figures in Germany in the 1930s and '40s, and never saw anything during the campaign that made me see fit to change my opinion there," he said.

And part of Weld's sales pitch to New Hampshire voters is that he will call Trump out on his divisiveness. "The sense is these days in Washington from the top right on down is an effort almost to pit group against group and to divide the country," he said in Henniker late last month. "That was the hallmark of the campaign…but I don't think that's the job of the president of the United States."

It's early yet, but Weld's campaign is not drawing rave reviews. A University of New Hampshire poll of 218 likely voters at the end of February showed Trump at 68 percent, CNN commentator John Kasich at 17 percent, and Weld with just 3 percent in his own back yard. Politico today ran a withering article headlined "Trump's primary challenger stumbles out of gate: Aside from a few TV hits and public events, the ex-Massachusetts governor isn't putting up much of a fight against Trump."