Trump is routinely accused, with good reason, of distorting the facts and failing to face reality. It's time for his critics to take a good long look in the mirror. 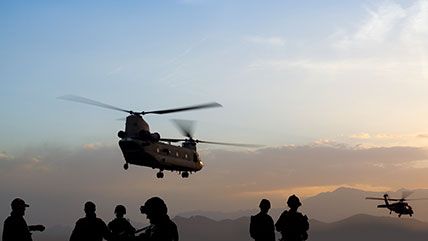 "The Trump presidency made a deep descent in December," Sen. Mitt Romney (R–Utah) announced in a wave-making Washington Post column in January, just prior to being sworn in. Why that particular month out of the president's tumultuous first 24?

"The departures of Defense Secretary Jim Mattis and White House Chief of Staff John F. Kelly," Romney wrote, "the abandonment of allies who fight beside us, and the president's thoughtless claim that America has long been a 'sucker' in world affairs all defined his presidency down." In other words, it's the foreign policy, stupid. When the White House takes minor steps to ratchet back Washington's default posture of global interventionism, it's greeted as a catastrophe.

It is amazing what Washington's proverbial "adults in the room"—as both Mattis and Kelly were frequently characterized as during their Trump tenure—consider to be a red line of presidential comportment. Sure, Trump can impose reckless and unconstitutional bans on legal U.S. residents from certain majority-Muslim countries, consciously enact a family-separation policy as an immigration deterrent, and call trade wars "good and easy to win," all while averaging 10 lies a day and acting like your boorish-if-occasionally-hilarious Uncle Bob. But contemplate withdrawing a combined 9,000 troops from Syria and Afghanistan, as Trump did in December, and suddenly no one's laughing.

"We are headed towards a series of grave policy errors which will endanger our nation, damage our alliances & empower our adversaries," warned Sen. Marco Rubio (R–Fla.) at the time.

"Never been more alarmed for the nation since coming to DC over three decades ago," tweeted Bill Kristol of the recently shuttered Weekly Standard.

Mattis resigned within hours of Trump's announcement that all 2,000 U.S. troops in Syria would be withdrawn, saying in his resignation letter that the president has "the right to have a Secretary of Defense whose views are better aligned with yours on these and other subjects." Kelly, who worked both as Trump's secretary of homeland security and as his chief of staff, told the Los Angeles Times in an exit interview that his performance in the latter position should be measured by what the president didn't do—namely, withdraw troops from abroad sooner.

"When I first took over [in August 2017], he was inclined to want to withdraw from Afghanistan," Kelly told the paper. Instead of cutting and running, the president added 4,000 troops at the urging of Kelly and the military brass. Eighteen Americans have died in the country since then.

By most reported accounts, Trump's December decisions—the details of which were still being contested at press time, not least by Trump himself—came off half-cocked, poorly coordinated, and sold with a combination of hyperbolic bluster and blunt truth telling. In other words, they were in keeping with how the current president does just about everything.

But because the moves involve life and death, and because the political class is inherently accepting of lethal force abroad, mainstream Democrats joined disappointed Republicans and never-Trump conservatives in declaring that this flawed process for once cannot stand.

Rice's former boss Hillary Clinton—in a tweet that served as a timely reminder of her comparatively more interventionist instincts—also asserted that "this President is putting our national security at grave risk."

If there's this much freakout over the withdrawal of four figures' worth of troops, imagine what would happen if the president got serious about our 26,000 in South Korea, 54,000 in Japan, and 64,000 in Europe.

By the time the U.S. overthrew the Taliban government in December 2001, a total of seven Americans had died in the war there. That number is now north of 2,300. "There is virtually no possibility of a military victory over the Taliban and little chance of leaving behind a self-sustaining democracy," foreign affairs author Robert Kaplan wrote in The New York Times on January 1, "facts that Washington's policy community has mostly been unable to accept."

Trump is routinely accused, with good reason, of distorting the facts and failing to face reality. It's time for his critics to take a good long look in the mirror.