Why Do So Many Modern Jobs Seem Pointless?

An investigation into why people are working more without accomplishing more

Roderick Long | From the February 2019 issue 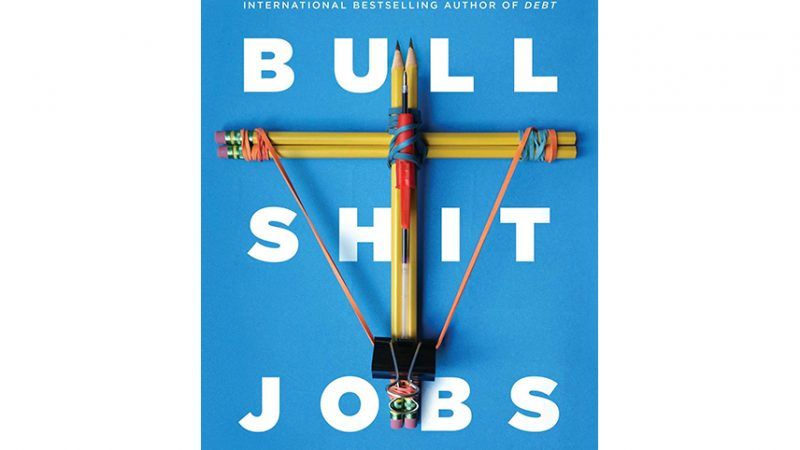 During the last century, everyone from John Maynard Keynes to The Jetsons predicted that in the future, technological advances would drastically cut down the number of hours the average person would need to work to keep the economy going. Why didn't that happen?

In Bullshit Jobs, David Graeber, an anthropologist at the London School of Economics, suggests it did happen. Not that people are working fewer hours, but that fewer of those hours are actually needed.

Graeber argues that much, perhaps most, of the waged labor in the world's industrialized nations consists of "bullshit jobs": jobs that are "so completely pointless, unnecessary, or pernicious that even the employee cannot justify [their] existence." These are not to be confused with "shit jobs," which are unpleasant and poorly paid but often produce some obviously useful good or service. On the contrary, bullshit jobs may be well-paid and fairly easy, yet people nevertheless tend to find them extremely demoralizing, as evidenced by testimonials Graeber has collected from workers around the world. Contrary to the widespread presumption that people seek maximum financial return for minimum effort, Graeber finds that people will often quit a bullshit job for a lower-paying and more labor-intensive one if the latter offers greater scope for meaningful personal agency.

Many bullshit jobs exist "only or primarily to make someone else look important" or to solve problems arising from a "fault in the organization" or "the damage done by a superior." Graeber points to polls in which 37 to 40 percent of respondents felt their jobs made no "meaningful contribution to the world." Add the unneeded aspects of needed jobs, and Graeber estimates the total "bullshitization" of the job market at "slightly over 50%."

While it's a commonplace that the "service" sector has dramatically increased at the expense of traditional industry and agriculture, Graeber points out that this does not mean we are seeing an explosion of "waiters, barbers, salesclerks, and the like." The proportion of such jobs has remained small and steady. The growth in the service sector consists primarily of such positions as "administrators, consultants, clerical and accounting staff, IT professionals, and the like." While not all such jobs are bullshit, this is the place where "bullshit jobs proliferate," he says. (As an academic, I can testify to the relentless increase, within the academy, in both the numbers of administrative staff and the weight of bureaucratic burdens they place on faculty.)

In particular, Graeber identifies the financial sector as a major generator of bullshit jobs, inasmuch as the "overwhelming bulk of its profits comes from colluding with government to create, and then to trade and manipulate, various forms of debt." Eliminating unneeded or harmful tasks would drastically cut the amount of labor needed to sustain the economy.

Criticism of make-work often focuses on the public sector, but Graeber maintains that the problem is at least as pervasive in private industry. As Graeber notes, this thesis will meet with resistance from many libertarians, who expect inefficiency from government but not from markets. Graeber summarizes what I'll call the First Libertarian Response: "Since competing firms would never pay workers to do nothing, their jobs must be useful in some way that [we] simply do not understand."

In reply, Graeber challenges his critics to explain how employees who spend most of their workdays surfing the internet or creating cat memes are secretly fueling profits. He also points to cases where such a job goes unfilled for months or years with no adverse consequence—or, in extreme instances, where the holder of a job stops coming to work and no one notices. A six-month bank strike in Ireland, he notes, caused far less economic disruption than a 10-day strike of garbage collectors in New York two years earlier. (The Irish coped by circulating checks as though they were cash.)

Graeber is right to be unimpressed by the First Libertarian Response. But as he himself notes, a different response is available: to grant that private-sector bullshit jobs exist but argue that they're the "product of government interference." Graeber is extremely dismissive of this Second Libertarian Response—so much so that he apparently forgets about it a few pages later, when he claims that "doctrinaire libertarians…always insist" on the First Response. But before he forgets the Second Response, he characterizes it as the product of a naive "faith" in the "magic of the marketplace" and objects that it's "circular" and "can't be disproved." Since "all actually existing market systems are to some degree state regulated," he writes, it will always be possible to assign the results one likes to the market and the results one dislikes to the government.

This response is surely too quick. Disentangling the contributions made by different components of a social system is difficult, but it's hardly impossible; otherwise there'd be no such thing as social science.

But Graeber does have more, and better, to say to the Second Libertarian Response. While the proportion of administrative staff to faculty has been mushrooming at both public and private colleges, "the number of administrators and managers at private institutions increased at more than twice the rate [that] it did at public ones"—135 percent at the former from 1975 to 2005, compared with 66 percent at the latter. Declaring it "extremely unlikely that government regulation caused private sector administrative jobs to be created at twice the rate [that] it did within the government bureaucracy itself," Graeber concludes that the "only reasonable interpretation" is that "public universities are ultimately answerable to the public" and "under constant pressure to cut costs," while "private universities are answerable only to their board of trustees," generally made up of "creatures of the corporate world" who find it "only natural" that administrators should enjoy a retinue of flunkies.

Yet Graeber's explanation is perfectly compatible with the Second Response. If libertarians are right, then market discipline is the best form of accountability. It might still be true that democratic oversight is second best, or at any rate better than nothing. When government-granted privileges enable nominally "private" firms to largely insulate themselves from competition, it's no surprise at all, from a free market standpoint, that public institutions subject to relatively robust forms of democratic oversight can be more efficient than private institutions subject to relatively weak forms of market discipline. A healthy jackal may well prove stronger than a very sick lion.

Graeber seems to assume that the only form the Second Response can take is one that sees big business as the victim, rather than the beneficiary, of regulation—one where "increases in government regulation" have "forced corporations to employ armies of box tickers to keep [the regulators] at bay." This is a rather odd assumption for Graeber in particular to make. After all, he is familiar with the left-libertarian Kevin Carson and even cites his work favorably (ironically, only one page before his line about what "doctrinaire libertarians" all believe). According to Carson's analysis, insulation from competitive discipline turns favored firms into islands of central planning, protecting executives from the cost of inefficient decisions.

Moreover, unlike many critics of libertarianism, Graeber is well aware of the enormous gap between a free market and the "entanglement of public and private, economic and political" that dominates our economy, with government playing the role of "guaranteeing private profits" so that "economic and political imperatives have come to largely merge." He even explains that by "capitalism" he is referring "not to markets," which have "long existed," but to the relatively recent "relation between some people who owned capital, and others who did not and thus were obliged to work for them." By his own lights, then, Graeber is not entitled to dismiss the Second Response as casually as he does.

On Graeber's analysis, unneeded jobs are protected by the perception that eliminating them would throw people out of work. That Jetsons vision of reduced working hours was supposed to benefit the workers, not impoverish them. Graeber notes that while, as an anarchist, he generally prefers bottom-up grassroots solutions to social problems rather than top-down public policy solutions, he nevertheless favors a tax-funded universal basic income as a way to relieve the working class's reliance on bullshit jobs. But calling upon the state for assistance is always a risky strategy for anarchists; those who subsidize the piper call the tune.

Whatever the blind spots in his analysis, Graeber's liberatory vision of a de-bullshitized future of work should serve as a useful corrective for those who are too quick to take the case for free enterprise as a validation of the perversities of the existing employment market.