People are losing their damn fool minds in the midst of Putin paranoia. 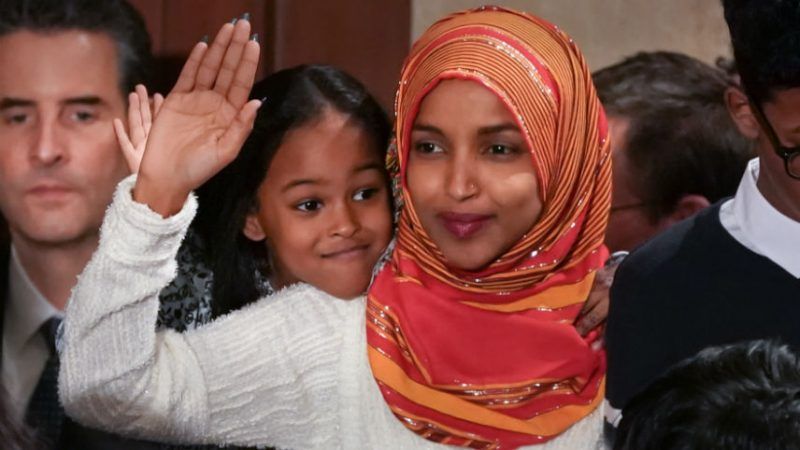 On Tuesday evening, one of the newest and most controversial Democrats in Congress, Rep. Ilhan Omar (D–Minn.), asserted breathlessly on Twitter that the explanation for Sen. Lindsey Graham (R–S.C.) careening so violently in his approach toward Donald Trump between 2015 and now is that some nameless but powerful "they" have "compromised" the chairman of the Senate Judiciary Committee.

They got to him, he is compromised! https://t.co/m8sB3EmElg

Challenged on CNN this morning to back up her startling claim with evidence, Omar instead employed a sloppy circumstantial standard we've seen all too often in American political discourse these past four years: Well, what else explains behavior and policy positions I don't like?

"Over the last three years we have seen many times where Senator Lindsey Graham has told us how dangerous this president could be if he was given the opportunity to be in the White House," Omar said. "And all of a sudden he's made not only a 180 turnaround, but a 360 turnaround. And so I am pretty sure that there is something happening with him, whether it is, ah, you know, something that has to do with his funding when it comes to running for office, whether it has something to do with the polling that they might have in his district, or whether it has to do with some sort of leadership within the Senate. He is somehow compromised, he'll no longer stand up for the truth, and to make sure that he is fighting to protect that oath that he took in serving the American people."

Emphases mine, to illustrate how easy it is for the rhetorically reckless to journey via the transitive property from political hypocrisy to possible treason.

Repeatedly prodded to provide a more factual case, Omar closed with this smiley little hand-wave. "The evidence really is present to us, it's being presented to us, in the way that he's behaving," she said. "My tweet was just an opinion based on what I believe to be visible to me, and I'm pretty sure there are lots of Americans who will agree on this."

There are plenty of reasons to criticize Lindsey Graham—today, tomorrow, 20 years ago, last week (when I did twice). But it requires neither a lurid imagination nor a loose smear to locate a theory for what might be happening with the senator. Like many Republican elected officials, including his longtime antagonist Sen. Rand Paul (R–Ky.), Graham is trying to navigate his political career and relationship with a mecurial president he once competed against, in such a way to further his policy goals and preserve his job. The process is definitionally degrading—look what has happened to the House Freedom Caucus, for example—and involves not-infrequent compromise, philosophical switcheroos, and embarrassment. And it's how Washington politics have worked for pretty much my whole adult life.

But that explanation's no fun, amirite? Apparently, rather than entertain the possibility that Lindsey Graham is a not-very-principled opportunist like most politicians on Capitol Hill, various anti-Trump members of the political class would rather take a page out of 1950s politics and hint heavily about Graham's possibly deviant sexuality. Here's Jon Cooper, chairmain of The Democratic Coalition ("the nation's largest grassroots Resistance organization"), going right there earlier this week:

By the way, as an openly gay man myself, I couldn't care less about Lindsey Graham's sex life (gay, straight or otherwise). However, Graham is the Senate Judiciary Chair and there's a strong likelihood that he's being blackmailed by the Russians. If so, that needs to be revealed.

These are some dark roads we're hurtling down, America.

Not a day goes past in these fraught times without a gold-plated member of the #Resistance—such as former FBI director James Comey earlier this week—invoking the famous 1954 quote from Army attorney Joseph Welch to commie-hunting Sen. Joseph McCarthy: "Have you no sense of decency, sir, at long last?" To which one might append to its 2019 quoters, "Have you forgotten sir, at long last, that McCarthy's biggest sin was making false, career-damaging accusations that people were in cahoots with the Kremlin"?

So John McCain accuses Rand Paul of "working for Vladimir Putin." Daily Kos Political Director David Nir criticizes 2020 presidential contender Rep. Tulsi Gabbard (D–Hawaii) for her "adoption of Putin's talking points." NBC News asserts that two-time Green Party presidential nominee Jill Stein "has long been criticized for her support of international policies that mirror Russian foreign policy goals." In his "18 reasons Trump could be a Russian asset," the Washington Post's Max Boot includes, among the more serious details that have emanated from the Mueller investigation, a bunch of foreign policy emphases indistinguishable from those of Trump's ideological precursor, Pat Buchanan:

— Trump supports populist, pro-Russian leaders in Europe, such as Viktor Orban in Hungary and Marine Le Pen in France, just as the Russians do….

— Trump is pulling U.S. troops out of Syria, handing that country to Russia and its ally Iran.

— Trump has effectively done nothing in response to the Russian attack on Ukrainian ships in international waters, thereby encouraging greater Russian aggression.

This is what happens when you degrade evidentiary standards at a time of heightened political emotion. Not only do powerful individuals get hit with proofless accusations, the policy preferences of us plebes, too, are increasingly viewed through the heavily distorting lens of whether Moscow would cheer them on. "How do we know this is not a Putin shutdown," asked former Nixon White House counsel John "Worse and Worser Than Watergate" Dean this week. "[I]t is difficult to believe Trump isn't doing it to impress Putin, and give him hard evidence of the failure of democracy." Now do the 20 shutdowns before Trump.

I'm not convinced that the best way to contain Vladimir Putin is by seeing his shadow every time an American politician does something even half-unusual under the sun. Nor is lowering the bar for public accusations of being compromised. America is on the verge not just of individual injustice, but of a haphazard, bad-faith narrowing of what policy ideas and political alliances can be acceptably spoken out loud.

We can do evidence-based discourse and criminal prosecutions, even in the midst of a panic. We're going to have to keep reminding ourselves how.