The policy is very popular and a top priority for House Democrats, but it would hurt innocent people without doing much to improve public safety. 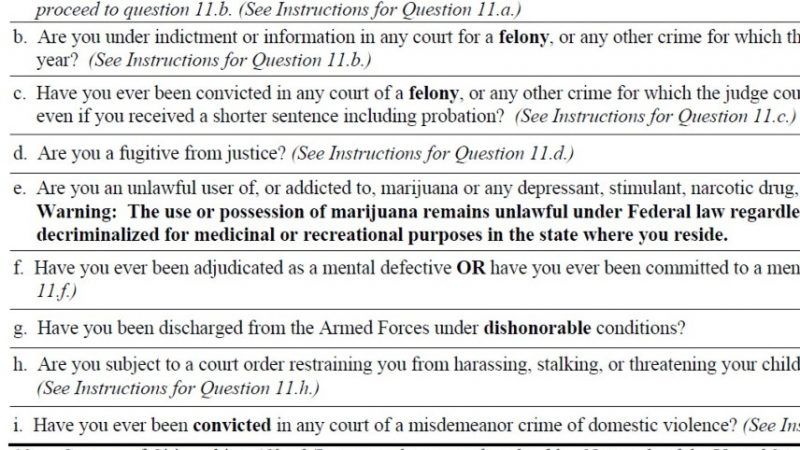 This week, as one of their first legislative initiatives after taking control of the House, Democrats unveiled the Bipartisan Background Checks Act of 2019, which would require that almost all firearm transfers involve federally licensed dealers. The aim is to make sure that all gun buyers undergo background checks to verify that they are legally allowed to own firearms.

This policy is very popular, favored by 84 percent to 94 percent of respondents in recent national polls. It's not hard to see why: Assuming that Congress has selected fair and logical criteria for owning guns, shouldn't those rules be enforced to the fullest extent possible? Why make an exception for private transfers, thereby giving potentially dangerous people a way to complete purchases that would otherwise be blocked?

On the face of it, there is no downside to broadening the background check requirement, and it might stop would-be mass shooters and other violent criminals from arming themselves. Advocates portray a system of "universal background checks" as the epitome of "commonsense, bipartisan gun violence prevention legislation," the sort of policy that unites reasonable people across the political spectrum. It seems you'd have to be a crazy extremist to oppose the idea. Yet if you dig into the details, you will find sound reasons to be skeptical. I can think of at least four:

1. "Universal background checks" are not really universal. I am not talking about the exceptions for police, military personnel, and transfers between close relatives. I am talking about the impossibility of enforcing a requirement that all gun sales go through federally licensed dealers. Last year researchers who looked at what happened after Colorado, Delaware, and Washington imposed that requirement reported that "background check rates increased in Delaware, by 22%–34% depending on the type of firearm," but "no overall changes were observed in Washington and Colorado." It's easy to understand why the average gun owner might balk at the hassle and expense of bringing his firearm to a licensed dealer so he can legally dispose of his own property. People who knowingly sell guns to criminals are even less motivated to comply. The government may want to record all heretofore private transfers, but there is no practical way of accomplishing that goal.

2. The criteria for owning guns are not fair or logical. Federal law prohibits gun sales to millions of Americans who pose no threat to others, including anyone who uses illegal drugs, anyone who was ever subjected to involuntary psychiatric treatment, and anyone with a felony record, whether or not the offense involved violence or even a victim. Assuming that a broader background check requirement actually results in more background checks, more people will unjustly lose their Second Amendment rights because a database shows they were convicted of marijuana possession or treated for suicidal impulses. While most "unlawful users" of controlled substances probably can avoid detection, they will have to lie on the federal firearm purchase form, which is itself a felony punishable by up to 10 years in prison. And as the form explicitly says, unlawful users of controlled substances include people who use marijuana for medical or recreational purposes, even when it's allowed by state law.

3. Background checks won't stop mass shootings. While 70 percent of respondents in a 2018 Gallup poll thought "requiring background checks for all gun sales" would be "very effective" in "preventing mass shootings," the perpetrators of these attacks typically do not have disqualifying criminal or psychiatric records. Those who are not legally allowed to own guns can still get them from people who are, as the perpetrators of the Columbine and Sandy Hook massacres did.

4. Background checks won't stop ordinary criminals from getting guns. Violent criminals are already breaking the law by using guns to commit crimes and even by owning the guns if they have felony records. What are the chances that they or the people who sell them guns will suddenly decide to obey the law when it requires background checks for all transfers?

The Bipartisan Background Checks Act of 2019, in short, would criminalize actions that violate no one's rights, impose burdens on innocent gun owners, and deprive harmless people of the right to armed self-defense without doing much of anything to improve public safety. No wonder it's a top priority for Democrats.