No, Jill Stein Did Not Cost Hillary Clinton the White House 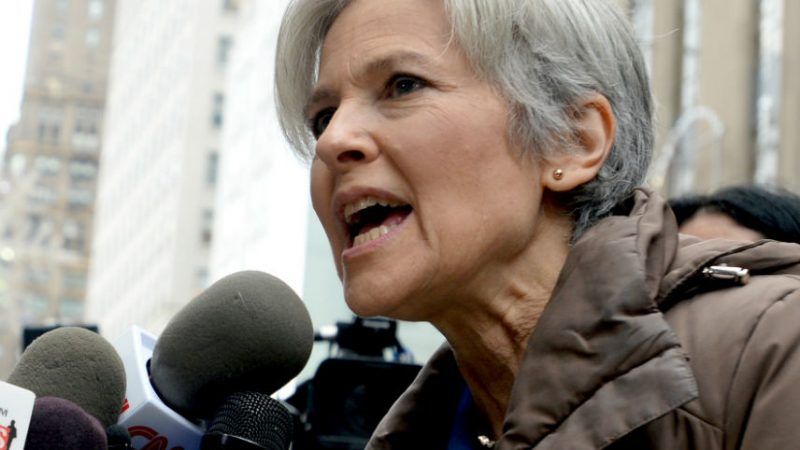 Unfortunately, the Russian strategy paid off:

This apparently is a lesson that requires re-learning and re-re-learning, no matter how many times Howard Dean says batty stuff like, "Had Stein not been on the ballot we might not have Trump." Even granting Dean's anti-competitive hypothetical of removing either a disfavored second-time candidate or an entire political party that has been in the presidential arena since 1996, there is zero reason to believe that a Green-less campaign would have resulted in a Trump-less White House.

Take the most plausible of those figures above—Stein receiving five times the number of votes in Michigan that separated Trump from Hillary Clinton. How would Stein voters have voted without Stein?

While the answer is unknowable, we do have national exit polls that shed some light. For instance, CBS News asked Stein voters what they would have done if faced with a ballot featuring only Clinton and Trump. Result: 61 percent said they wouldn't vote, 25 percent said they'd vote for Clinton, 14 percent said Trump. Applying that formula to Michigan would not be enough to make up that 10,704-vote gap:

If you reapportion Stein's 51,463 Michigan votes according to exit-poll answers about what her voters would have done without her on the ballot, you'd get:

Not enough to make up Trump's slim advantage.

You'd have to take an additional 10 percent of the Michigan electorate out of the wouldn't-vote camp and move each and every one into the Hillary camp to cover that Trump-Clinton spread. But wait! Keep in mind that the exit poll removed all third-party candidates as options, even though the Michigan ballot also included Libertarian Gary Johnson (who received 3.59 percent in the state), Stein (1.07 percent), U.S. Taxpayers nominee Darrell Castle (0.33 percent), and the Socialist Party's Angela Nicole Walker (0.05 percent). Given the record-high unfavorability ratings of the two major-party candidates, I think it's more likely that surgically removing only Stein's name and party from the ballot would reduce, not increase, the amount of would-be Green support that exit polls found for two-party candidates.

Don't take my word for it? Try FiveThirtyEight's Nate Silver: "[B]oth pre-election polls and the national exit poll suggests that a lot of [third-party voters] wouldn't have voted at all, if they'd been forced to pick between the two major candidates. The breakdown might have been something like 35 percent Clinton, 10 percent Trump and 55 percent wouldn't vote. That doesn't wind up netting very many votes for HRC."

[A Wall Street Journal] analysis, in which third-party votes [in eight swing states] were reassigned to both Mr. Trump and Mrs. Clinton, finds that Mrs. Clinton would have needed to win 70% of the vote share that went to the Libertarian and Green parties across all eight states to claim victory….In another scenario, even if every one of Ms. Stein's left-leaning supporters is assigned to Mrs. Clinton in those same eight states, she still would have needed to win more than 50% of Mr. Johnson's supporters to flip enough states to win the election.

Or Vox, or the Washington Post, or whoever looked at the issue with rationality instead of emotion.

Then there's the fact that a post-election poll giving voters a chance for a do-over showed more, not less, support for both Stein and Johnson, with the only real pro-Clinton reversal action coming from those millions of people who sat the election out (including millions of people who voted in November 2016 but left their presidential ballots blank).

There are other bad Stein-related arguments making the rounds in the wake of the Senate Russia reports. For instance, this widely cited NBC News analysis engages in some rhetorical sleight of hand:

There's nothing in the reports to suggest that Stein was aware of the influence operation, but the Massachusetts physician has long been criticized for her support of international policies that mirror Russian foreign policy goals.

Note the almost infinitely elastic use in that sentence of the word but. Did Stein's Russia-related foreign policy depart noticeably from that either of the Green Party or the progressive left writ large? The article is silent on the question, but the general answer is decidedly "no." Here, for example, is the most successful Green Party presidential candidate in history, Ralph Nader, writing in 2014 in direct response to Russia annexing Crimea:

The Russians have their own troubles, of course, but they do have a legitimate complaint and fear about the United States' actions following the collapse of the Soviet Union. Led by President William Jefferson Clinton, the United States pushed for the expansion of the military alliance NATO to include the newly independent Eastern European countries. This was partly a business deal to get these countries to buy United States fighter aircrafts from Lockheed Martin and partly a needless provocation of a transformed adversary trying to get back on its feet….

The NATO provocation was only one of the West's arrogant treatments of post-Soviet Russia, pointed out in the writings of Russian specialist, NYU professor Stephen Cohen (see his pieces in The Nation here). That sense of disrespect, coupled with the toppling of the elected pro-Russian President of Ukraine in February, 2014 (which was not lawful despite his poor record) is why Mr. Putin's absorption of Crimea and his history-evoking speech before the Parliament, was met with massive support in Russia even by many of those who have good reasons to not like his authoritarian government.

You can disagree with the America-provoked-Russia-by-expanding-NATO argument, as indeed I do, without tagging those who believe it—including many and perhaps most libertarians—as Russian stooges. The modern history of anti-interventionism was filled with don't-poke-the-bear analysis and skepticism about America's expanding global role long before Vladimir Putin was a household name.

Yes, it's weird that Stein attended that RT dinner in Russia attended by future admitted felon Michael Flynn (as well as 2012 Justice Party presidential nominee Rocky Anderson!), but the intimation that she was somehow working in parallel with Putin would seem to require more data points. Here's NBC News's best effort:

[T]he Stein campaign parroted the Russian position on Ukraine in 2016 and criticized the U.S. for installing a government in Kiev "hostile to Russia."

Yes, Stein serially criticized the U.S. for backing regime change in Ukraine, and for provoking Russia via NATO expansion—both reasonably Putinesque points. But she also in this August 2016 Washington Post interview explicitly rejected "moral equivalence" between Washington and Moscow, and when asked "What do you think Putin's goals are?" answered "Not good. Not good. I would have no faith and trust in Putin, but on the other hand I think to be needlessly militarizing this conflict is not in the interest of the American people."

Does that qualify as "parroted"?

The only other specific foreign policy area NBC News gets into is this:

In the closing weeks of the campaign, RT quoted Stein suggesting that Hillary Clinton could lead the U.S. into a nuclear war with Russia and saying Trump was a safer choice.

"On the issue of war and nuclear weapons," Stein said, according to RT, "it is actually Hillary's policies which are much scarier than Donald Trump who does not want to go to war with Russia."

This passage seems pretty Russia-focused and Trump-positive, but the source material is actually about Syria, and is not kind to the Republican. Here are the words that immediately precede the above quote:

It is now Hillary Clinton that wants to start an air war with Russia over Syria by calling for a no-fly zone. We have 2000 nuclear missiles on hairtrigger alert. They are saying we are closer to a nuclear war than we have ever been. Under Hillary Clinton, we could slide into nuclear war very quickly from her declared policy in Syria. I sure won't sleep well at night if Donald Trump is elected, but I sure won't sleep well at night if Hillary Clinton elected. We have another choice other than these two candidates who are both promoting lethal policies.

Again, this is pretty standard analysis from America's anti-interventionist tradition, left or right. And let's not forget Clinton's recent response to Trump's announced troop-withdrawal from Syria:

Actions have consequences, and whether we're in Syria or not, the people who want to harm us are there & at war. Isolationism is weakness. Empowering ISIS is dangerous. Playing into Russia & Iran's hands is foolish. This President is putting our national security at grave risk.

The Mueller investigation may yet uncover actual ties between Stein and Moscow, as opposed to the non-earth-shattering evidence that Russian social media outfits sent pro-Stein messages into the world. But I wouldn't count on it. Americans who don't like the existence of left-leaning third parties will eventually have to confront the reality that such presidential candidates tend to do better in elections following eight years of Democratic control of the White House, and that one of the main points of policy difference will be a desire for less U.S. involvement in war. As Jesse Walker memorably observed, when it comes to sowing discord in America, Russians can't compete with Americans.