'We've Beaten [ISIS]…Now, It's Time for our Troops To Come Back Home'

Donald Trump explains his decision to withdraw from Syria directly to the American people. 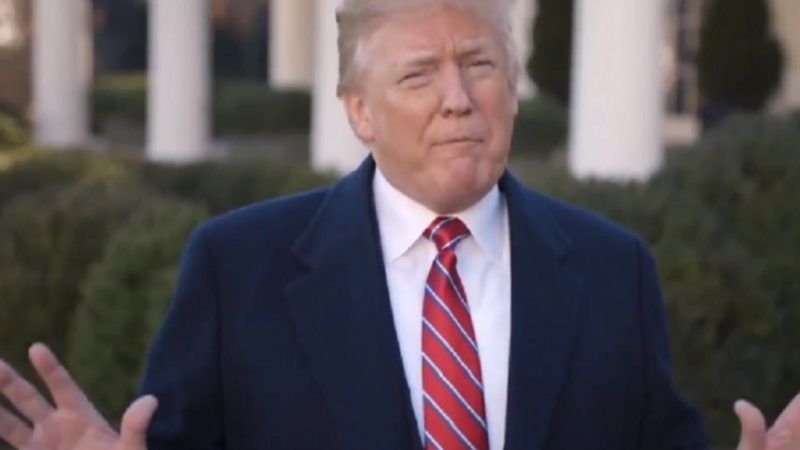 Donald Trump's direct-to-Twitter address explaining why we the United States is pulling out of Syria is worth watching. Rarely has an elected official, much less a president, been as blunt and plain-spoken.

After historic victories against ISIS, it's time to bring our great young people home! pic.twitter.com/xoNjFzQFTp

I'll tell you, they're up there, looking down on us and there is nobody happier or more proud of their families to put them in a position where they've do such good for so many people….We won and that's the way we want it and that's the way they [pointing upward] it.

As with anything Trump does, his decision elicits a wide array of reactions, even from his ostensible allies. As we've noted here, while libertarian-leaning Republicans such as Rep. Justin Amash (R-Mich.) and Sen. Rand Paul (R-Ky.) have praised Trump while noting the lack of military or constitutional authorization for our presence in the first place, many Republicans are against pulling out the roughly 2,000 combat troops in Syria.

.@LindseyGrahamSC and @marcorubio are essentially demanding a permanent U.S. military presence in Syria (and many other places). They justify it with an irrational, unachievable objective: We'll get out when conflict and terror cease to exist. All without congressional approval.

Liberal hawks are more likely to see the decision as more evidence that Trump is a pawn of Russia, since Russia is backing Iran and Syria in the region. Progressives who were generally against entering Syria when Barack Obama started operations are now tut-tutting not about the withdrawal per se but about the process and the lack of coordination among the very generals and diplomats who would have stood in its way. Here's MSNBC's Chris Hayes:

I literally did a whole thing about how it's entirely defensible! But as I said before, the process really does matter. Is not giving anyone a heads up before you announce something like this good or bad?

Many on the right feel the same way, talking about the "proper" way to end a military action that didn't itself have a proper beginning. Here's National Review's David French

The proper action would have been to stay in Syria and seek congressional approval. Instead, Trump is remedying the constitutional defect in the worst way — by abandoning the field without granting Congress the opportunity to authorize a sound strategy. https://t.co/CIF5j9wrhD

When it comes to Trump, it's safe to say, there's always something to complain about. But not always. Here's MSNBC's Chris Matthews, reliably one of the president's toughest critics, explaining why he supports Trump on this one:

And now the clangers for military action are back at it again, this time attacking any removal of U.S. troops from [places in] which they insist maintain a permanent military presence over there…. What is undeniable is the predictable outrage of those who were so wrong about Iraq and are ready to be so wrong about Syria. Trump ran against stupid wars. Those who oppose him today on taking troops out of Syria opposed him them for the simple reason that those wars were the wars they cheered into being.

It's very good stuff and provides one of those rare and fleeting moments when you realize party politics serve to obscure deeper and more important coalitions of power and ambition in Washington.