In the absence of evidence, an innocent man was treated like a criminal. 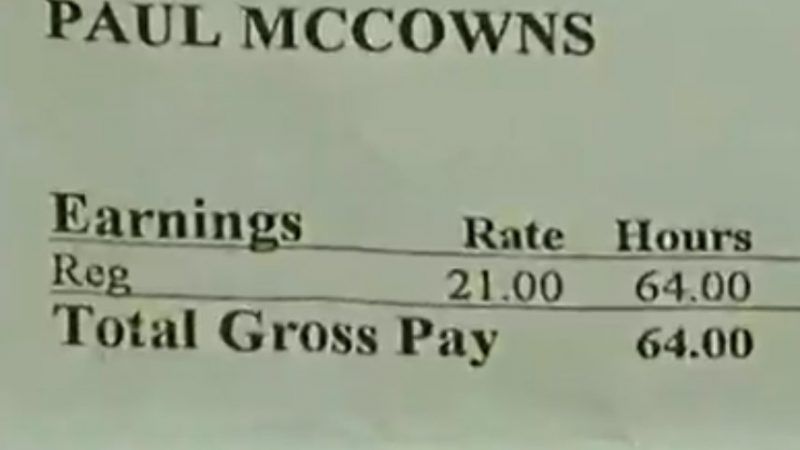 Paul McCowns is rightly upset over a "highly embarrassing" incident where he was allegedly racially profiled and eventually handcuffed for trying to cash his paycheck.

McCowns, who is black, recently started a new job at an electric company and decided to cash his first paycheck at a Huntington Bank branch in Brooklyn, Ohio, on December 1. McCowns is not a customer of the bank, but per company policy, non-clients can cash checks at Huntington branches if they provide a fingerprint.

McCowns gave his fingerprint, as well as his driver's license and Social Security card. That wasn't enough. "They tried to call my employer numerous times. He never picked up the phone," McCowns told WOIO of the bank workers. Once it became clear they wouldn't cash his check, McCowns left. Little did he know that someone from the bank had called police. "He's trying to cash a check and the check is fraudulent. It does not match our records," a bank employee can be heard saying in a recording of the 911 call obtained by WOIO.

Before he could drive away, McCowns told WOIO that a police car "pull[ed] in front of" him, and a cop told him to get out of the car. McCowns was handcuffed and detained in the squad car until police could confirm his employment and paycheck amount with the company he works for.

Police let him go, and McCowns claimed he successfully cashed his check for $1,082 at a different Huntington Bank branch the next day. But the whole situation left him feeling humiliated. "It was highly embarrassing, highly embarrassing," he told WOIO. "It hurts. It really hurts."

The bank has since issued a public apology. Brooklyn Police Chief Scott Mielke, meanwhile, told The Washington Post that police have arrested at least 10 people for trying to cash fake checks at that branch since July. Reason reached out to Mielke for clarification on the department's policy on detaining people like McCowns, but we have yet to hear back. (We will update this story if we do.)

McCowns' case is a good example of how institutional racism can screw over innocent people. I can understand that the bank employees were worried about fraudulent checks. But the fact that they singled out McCowns, whose only "crime" was not being a customer, suggests he was profiled based on the color of his skin. This culminated in one employee calling 911 and falsely claiming that his check was fraudulent.

Police had no choice but to respond. However, putting McCowns in handcuffs was completely unnecessary. While they had a tip that he had done something wrong, there was absolutely no evidence to back that up. It's also highly unlikely McCowns posed enough of a threat to warrant him being detained. So why did police have to escalate what should have been a non-incident in the first place?

Unfortunately, this case is not unique. In September, I wrote about Akil Carter, a black Wisconsin teenager driving home from church with his white grandmother. Two busybodies alerted police that a potential robbery could be taking place, so officers pulled the car over and put Carter in handcuffs. And in October, a black military veteran was cuffed on his own property by Kansas police, who apparently thought it was suspicious that he was moving a TV into his new house.

Ultimately, no one was physically hurt in any of these cases. But in the absence of evidence, police seem to have a tendency to treat innocent black people like criminals and needlessly escalate the situation. And that can be nothing short of humiliating.