Sen. Warren Has a Plan to Socialize Pharmaceuticals: Reason Roundup 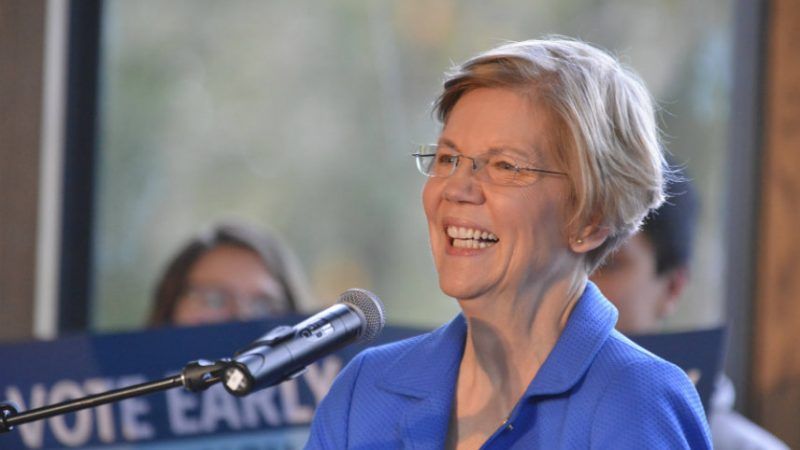 Big Gov wants a piece of Big Pharma. Are you ready for government-branded blood pressure meds, birth control pills, and other common pharmaceuticals? Sen. Elizabeth Warren (D-Mass.) is proposing the creation of a massive new federal project to manufacture medications. Under Warren's plan, the federal government would own and operate its own pharmaceutical company and mass-produce generic drugs.

In a statement, Warren insisted that she didn't want a government takeover of drug markets, just "to fix them." Her bill would create a new Office of Drug Manufacturing and order it to produce at least 15 different types of generic medications (drugs for which the patent has run out) in its first year.

But generic medications aren't generally the ones causing money troubles. Since they're not limited to patent-holding pharmaceutical companies, competition keeps prices low. Some stores even fill very common generic prescriptions for free, as an enticement to get customers to make other purchases there.

Which means Warren's proposal amounts to a huge new government undertaking that doesn't remotely accomplish what it purports to, leaving the initial problem intact while potentially erecting new access barriers and other unintended consequences. In addition to the huge cost of a federally funded pharma company, cutting into the money that private drug companies can make off generics could make it harder for them to invest in new research and bring more experimental drugs to market.

"When generics provide Americans with nine out of 10 of their prescriptions at only 23 percent of total spending on drugs, it is hard to fathom why anyone would call this system broken or insist that the government commandeer the business of developing, manufacturing and distributing these medicines," the Association for Accessible Medicines, which represents generic drug manufacturers, told Politico.

At best it's "an unrealistic distraction from policies that would meaningfully reduce drug prices," the group added.

Warren's so-called Affordable Drug Manufacturing Act "is unlikely to pass the Republican-led Senate," write Politico's Alex Thompson and Sarah Karlin-Smith. "But it signals that a future Warren White House could try to radically revamp the federal government's role in the pharmaceutical market in order try to lower prices."

While Warren's plan is uniquely ambitious, a lot of Democratic presidential hopefuls are proposing ways for government to meddle more in medicine markets. For instance, Sens. Kamala Harris (Calif.), Amy Klobuchar (Minn.), and Jeff Merkley (Ore.) introduced legislation last week that would give the feds power to forbid drug companies from raising prices. In the simplistic, Pollyanna-ish, and authoritarian accounting of many Democrats, drug companies prohibited from raising prices will simply keep making medications and selling them at or below cost rather than stopping production of products that they've been barred from profiting from.

• A bright spot for sentencing and prison reform, not so much for stodgy old crime-panic perpetuators:

The First Step Act hit 81 votes for cloture in the U.S. Senate while Tom Cotton watches by himself, pretending he's busy on his cell phone. pic.twitter.com/G9B57l6nG1

• But Cotton is now offering a slew of amendments that could doom the bill.

One woman shows us the 9MM she is turning in for the Baltimore City Gun Buy Back program. But she says she is using the cash to get a bigger weapon! Story on FOX45 at 4pm. pic.twitter.com/LlmCbezpU7

• New York's ban on nunchucks has been declared unconstitutional.

• ICYMI: Yesterday was International Day to End Violence Against Sex Workers. Coyote Rhode Island prepared this video to memorialize sex workers lost to violence in the past year.

• Join Reason at LibertyCon this January?

• Tune in to Jack Murphy's podcast this week to catch our far-reaching conversation about sex, social media, women's agency, my libertarian origin story, and more:

Me and @ENBrown dig deep into the myths around human trafficking, sex work, civil liberties, and the right to live your life how you see fit.

We also answer the burning question…where did the slut walks go?

• The Bitcoin bubble has burst, but that doesn't mean Bitcoin is dead.

• Cato calls for a war on drug-related deaths:

"…harm reduction seeks to avoid measures that exacerbate the harms the black market already inflicts on nonmedical users…Harm Reduction: Shifting from a War on Drugs to a War on Drug-Related Deaths https://t.co/HHOhJWrUjD via @CatoInstitute