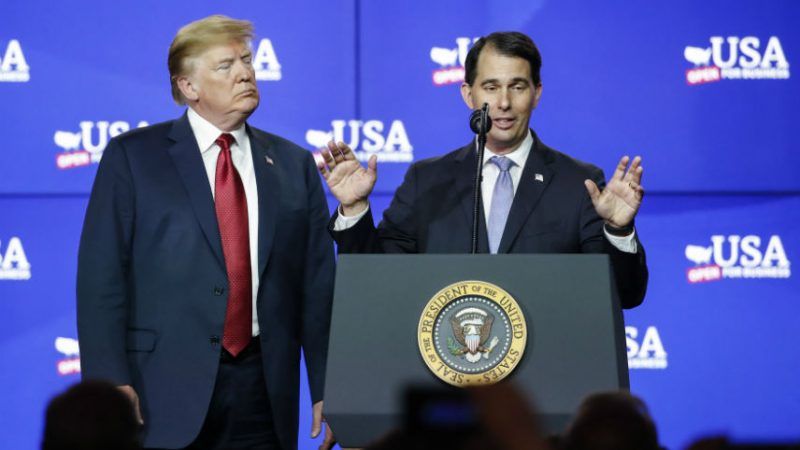 Is this not the perfect example of what George Mason University economics professor Daniel B. Klein meant Monday when he argued that "The LP helps the Democrat Party," and therefore "reduces liberty"? Not so fast.

Anderson has been included thus far in five non-partisan polls, averaging 4.4 percent to Evers's 47.4 and Walker's 44.6. Only one of those surveys, a Sept. 30-Oct. 3 effort from NBC News and Marist College, asked respondents both with and without the Libertarian as a choice (as well as Green Party candidate Michael White). Given options that more clearly resembled the actual ballot (albeit minus independent candidate Maggie Turnbull), voters defected more from the Democrat: 53 percent to 50 percent, compared to the 43-42 point leakage for Scott Walker. Anderson pulled three percent, White two percent.

With the important caveat that the overall amount of evidence is exceedingly small, this trend plays out in the other gubernatorial elections for which we have comparative polling data about third-party inclusion effects.

Nevada, whose governor's race is almost universally rated as a toss-up, includes a solid Libertarian candidate named Jared Lord competing against Democrat Steve Sisolak and Republican Adam Laxalt. In the four nonpartisan polls that have included him, Lord is pulling 4.8 percent, compared to Sisolak's 40.8 percent and Laxalt's 40.5. In the one poll that asked both with and without the Libertarian, Laxalt's one-percentage-point margin of 46-45 widened to four points (44-40 percent) when voters were given more choice. (Lord received a healthy 8 percent among likely voters.)

In Minnesota, Democrat Tim Walz had a 55 percent to 38 percent lead over Republican Jeff Johnson in a recent NBC News/Marist College poll when surveyors left Libertarian Josh Welter out of it, but that shrank to 51-36 after 6 percent of likely voters chose the Welter option. (The average of the three polls that include both Welter and Legal Marijuana Now nominee Chris Wright: Walz 47.3 percent, Johnson 39.3 percent, Welter 2.8 percent, Wright 2.3 percent.)

Only in the toss-up gubernatorial race of Ohio does the one with/without poll suggest that the Libertarian might be peeling from the Republican. Given the choice both of L.P. candidate Travis Irvine and Green Constance Gadell-Newton, voters gave 3 percent to each, while splitting Republican Mike DeWine and Democrat Richard Cordray, 44-44. Without the smaller-party candidates, it was still tied, 47-47, suggesting that the net effect was a push. (The three nonpartisan polls that include all four average out to: Cordray 42.3 percent, DeWine 41.3 percent, Irvine 3 percent, and Gadell-Newton 2 percent.)

The truth, as ever, is that no vote intrinsically "belongs" to any candidate or party, that nonvoters will almost certainly outnumber ballot-punchers three weeks from now, and what scant evidence we have is conflicting and race-specific on the question of what Libertarian voters would do in a world without that choice. Exit polls after the 2016 presidential election, for example, showed that 55 percent of Gary Johnson voters would have just sat out a Libertarian-less election, compared to 25 percent who would have voted for Hillary Clinton and 15 percent who preferred Donald Trump.

It also cannot be stressed enough that we have a disgracefully inadequate polling picture not just for Libertarians, but for some entire states. For example, there has not been a single nonpartisan poll taken in South Dakota's gubernatorial race. Not one! It's already bad enough that outfits such as Emerson College don't even include Libertarians who have polled as high as seven percent in totally toss-up races.