Are Teachers Really 'Not Paid for the Work [They] Do'? Time Says Yes, Reality Begs To Differ

Actually, the average salary for public-school teachers is close to the median income for U.S. households. 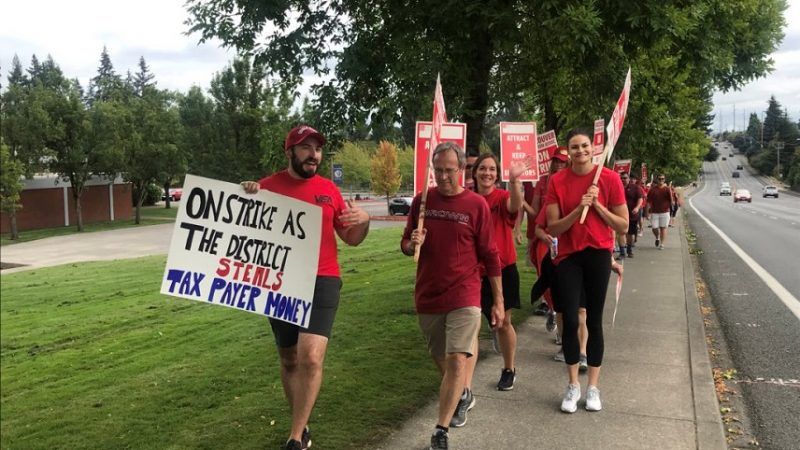 This story has been updated. Scroll to the bottom for more information.

Time magazine has a big new story out that purports to show just how little public-school teachers make. "'I Work 3 Jobs And Donate Blood Plasma to Pay the Bills.' This Is What It's Like to Be a Teacher in America" telegraphs its message in its headline.

The opening anecdote tells the story of a struggling veteran teacher reduced to selling blood plasma to make ends meet.

Hope Brown can make $60 donating plasma from her blood cells twice in one week, and a little more if she sells some of her clothes at a consignment store. It's usually just enough to cover an electric bill or a car payment. This financial juggling is now a part of her everyday life—something she never expected almost two decades ago when she earned a master's degree in secondary education and became a high school history teacher. Brown often works from 5 a.m. to 4 p.m. at her school in Versailles, Ky., then goes to a second job manning the metal detectors and wrangling rowdy guests at Lexington's Rupp Arena. With her husband, she also runs a historical tour company for extra money.

The polite term for this sort of journalism is b.s.

It may well be true that Brown's personal situation is as dire as Time makes out (I've reached out to her but haven't heard back), but things are surely more complicated than they are presented. After reading the article, I spoke with Scott Hawkins, the superintendent of the Woodford County public school district, where Brown works. He underscored that he could not talk about her particular situation but noted that a high-school teacher with a master's degree and 20 years experience would make $56,616 in salary. In a graphic and cover image for the story, Time says Brown has "16 years experience."

According to the salary schedule at the Woodford County schools website, that means Brown would make $55,645 in base pay (Hawkins explained that a teacher with a master's would be considered Rank II in the "certified salary schedule"). That doesn't include compensation in the form of health insurance and retirement contributions. Hawkins said he could not guesstimate how much the benefits were worth as percentage of salary, but Lisa Snell, director of education research at Reason Foundation, the nonprofit that publishes this website, tells me that "on average in the United States you could add 23.2 percent to any average salary for all benefits for total compensation."

Time's story is built around the latest entry in a series of reports from the progressive Economic Policy Institute on what Sylvia Allegretto and Lawrence Mishel call "the teacher pay penalty" or "the percent by which public school teachers are paid less than comparable workers." They write,

Providing teachers with a decent middle-class living commensurate with other professionals with similar education is not simply a matter of fairness. Effective teachers are the most important school-based determinant of student educational performance….relative teacher pay—teacher pay compared with the pay of other career opportunities for potential and current teachers—has been eroding for over a half a century.

You can read the study here. Allegretto and Mishel argue that teacher demonstrations and shortages around the country are driven by the fact that educators in K-12 public schools are making less money compared to other college graduates and "professionals" over the past several decades. "The teacher wage penalty was 1.8 percent in 1994, grew to 4.3 percent in 1996, and reached a record 18.7 percent in 2017," they write. According to their analysis, the "penalty" shrinks to 11.1 percent when you add in total compensation.

Their agenda is straightforward: They think teachers should be paid more, both in absolute terms and relative to other workers with college degrees or professional status. They have amassed a number of statistics from credible sources which show that inflation-adjusted teacher wages have in fact been flat for about the past 20 years.

I don't agree with Allegretto and Mishel that average teacher pay should be increased and I don't buy into their framework of a teacher "pay penalty." But that's besides the point that the Time story constitutes something akin to journalistic malpractice by suggesting that teachers such as Brown, who are pulling down salaries in the mid-50s, are being forced to sell bodily fluids to make ends meet. Indeed, according to Time's sister publication, Money, the median household income in Kentucky is $45,215, meaning that Brown is making about $10,000 more than half of all other households in the Bluegrass State.

And in fact, teachers are doing well compared to households on the national level, too. The median household income in the United States is $61,372. According to the largest teachers union, the National Education Association (NEA),

There are all sorts of issues and reforms of the public K-12 system that are worth talking about (go here for a start). That conversation would best be served by solid reporting of basic facts.

Update (Sunday, September 16): Sometime after its initial publication, Time revised the opening anecdote about Hope Brown that I quote above to indicate her salary. It now explicitly quotes her salary (emhasis added):

…Brown often works from 5 a.m. to 4 p.m. at her school in Versailles, Ky., then goes to a second job manning the metal detectors and wrangling rowdy guests at Lexington's Rupp Arena to supplement her $55,000 annual salary. With her husband, she also runs a historical tour company for extra money.