Tremendous Job: FEMA Left a Million Bottles of Water on a Puerto Rican Airstrip for a Year

But yeah, I'm sure FEMA is ready for Hurricane Florence. 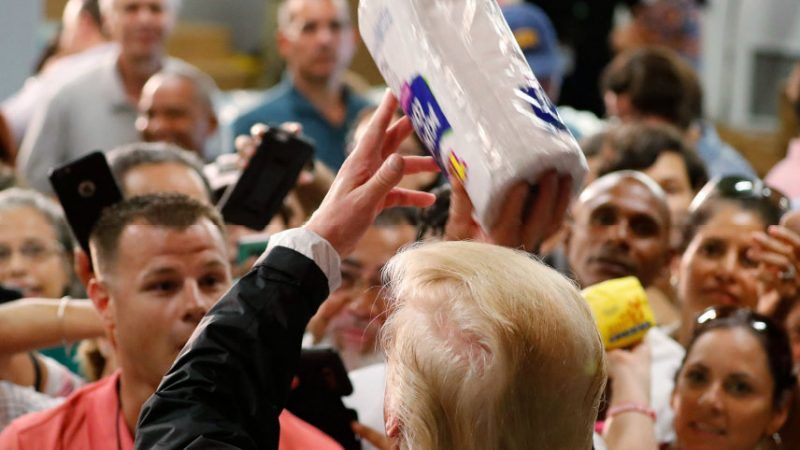 As another major hurricane bears down on the United States, President Donald Trump has told reporters the federal government's response to last year's storm in Puerto Rico was "tremendous" and "one of the best jobs ever done."

Almost on cue, pictures surfaced Tuesday night of what CBS News says is nearly a million bottles of water dumped at an airstrip in the aftermath of Hurricane Maria, which hit Puerto Rico last September. By Wednesday morning, the Federal Emergency Management Agency (FEMA) confirmed that, yes, those were bottles of water that never reached any of the stricken Puerto Ricans, more than 3,000 of whom died in the aftermath of the storm.

It's unclear who exactly is to blame here, but there's no doubt that the government screwed up. According to CBS, FEMA says it gave the water to the government of Puerto Rico, which failed to distribute it.

The images of all that wasted water sitting on a runway might be infuriating, but they're sadly unsurprising. Given FEMA's track record—which Reason's Joe Seyton explored in detail earlier this week—this is pretty much what we've come to expect in the wake of natural disasters.

The same can be said of Trump's willingness to claim that the response to Maria was a success. While the current president's propensity for hyperbole makes his assessment seem particularly inaccurate, it's really not much different from George W. Bush claiming that Michael Brown, the then-director of FEMA, was doing "a hell of a job" in the wake of Hurricane Katrina (while federal workers were wasting $2 billion in disaster aid and blocking private agencies from lending a hand). Or from Barack Obama and New Jersey Gov. Chris Christie sharing a bro-hug on the beach after Hurricane Sandy, even as FEMA was running out of water and failing to deliver the 24 million gallons of free gas it promised to the storm's victims.

For what it's worth, FEMA now acknowledges that it dropped the ball in Puerto Rico. In a report released in July, the agency described the supply shortages, outdated equipment, and unprepared staff that caused problems in Maria's aftermath.

This morning, Trump tweeted that FEMA is "ready for the big one" as Hurricane Florence bears down on North Carolina. The cycle begins again.