Why should an athlete be subjected to a nonsensical controversy ginned up by reporters? 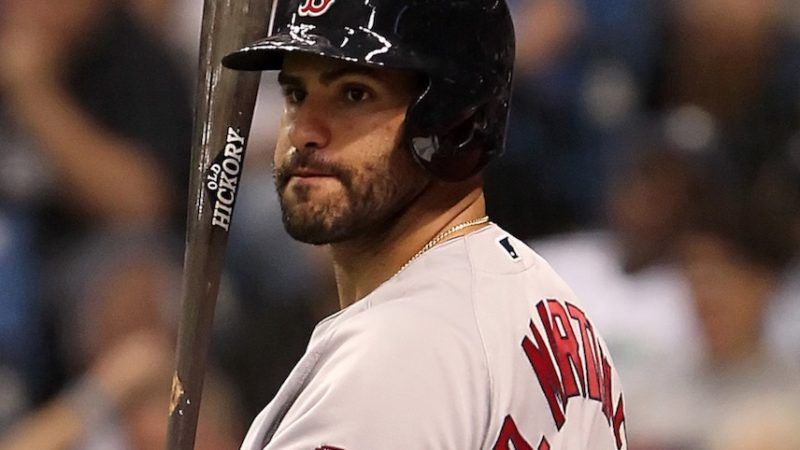 Someone recently dug up an old pro-Second Amendment Instagram post by Boston Red Sox star J.D. Martinez, in which the potential Triple Crown winner posted a picture of Adolf Hitler featuring the quote, "To conquer a nation, First disarm it's (sic) citizens." Martinez captioned the post, "This is why I will always stay strapped! #thetruth."

Needless to say, the discovery triggered a torrent of stories about the "controversial" nature of Martinez's 5-year-old post—because, apparently, disagreeing with a Hitlerian sentiment is now a provocative position. As it turns out, Hitler never said the words in Martinez's pro-gun meme, although the dictator indisputably embraced a policy of disarming, in both rhetoric and action.

Perpetuating a questionable quotation can happen to the best of us. But what seems to really tick off people—and it's difficult to judge how many average sports fans really care about Martinez's politics (I suspect far fewer than the coverage suggests)—is the notion that an armed population can be a freer one. "The rhetoric of invoking Hitler is indefensible because it trivializes what he and the Nazis did," Mike Godwin of "Godwin's law" fame told the Boston Herald. "It's historically inaccurate to state that Hitler wanted to take people's guns away. If anything, he wanted all citizens to have guns, except Jews."

Avoiding Nazi analogies is, generally speaking, a very good idea. But there's no evidence that Hitler wanted "all citizens" other than Jews to possess firearms. It's true that the Nazis relaxed a few gun laws that had been forced on Germany after World War I, but by 1938, the Third Reich had banned all Jews, Gypsies, and "enemies of the state"—which is to say, anyone the state deemed problematic—from possessing any weapons, including knives, firearms, and ammunition. Even for other Germans, gun laws remained relatively strict.

You may remember the feigned outrage over Ben Carson's 2015 contention that "through a combination of removing guns and disseminating deceitful propaganda, the Nazis were able to carry out their evil intentions with relatively little resistance." The folks at PolitiFact rated his argument completely false, because fact-checkers now believe they are gifted with the supernatural capability of judging the veracity of counter-histories.

The thing is, Carson hadn't claimed in his book that the Holocaust could have been averted. (Neither did the admittedly crude meme that Martinez used.) Rather, he argued that Nazis wouldn't have been able to implement their plans with "relatively little resistance."

Considering the damage Jews were able to inflict with only few weapons at the uprising in the Warsaw ghetto (and Jewish and non-Jewish partisans could throughout Europe), a person can plausibly argue that at the very least, an armed populace makes it harder for tyrants to succeed.

So though the notion that an armed population can stop mechanized armies or domestic military forces from implementing something like the Holocaust is debatable, what isn't debatable is that, whether we're talking about Mao Zedong or Josef Stalin or some tin-pot dictator of a banana republic, there's virtually no authoritarian, tyrant, or statist in modern history who hasn't attempted to disarm citizens. That includes Fidel Castro.

"As most of you guys know, I'm Cuban-American," Martinez explained. "Most of my family was run out of Cuba because of a brutal dictator. It's terrible…. My parents still talk about family members that are back in Cuba that I'll never get to meet. And it sucks." It sure does. Here in the United States, though, Martinez can celebrate the fact that a heavily armed citizenry helped repel subjugation.

"I love my country," Martinez went on to tell the New York Daily News. "I stand by the Constitution and I stand by the Second Amendment." It seems that he does. After all, the Founding Fathers believed that disarming the populace would be an attack on a fundamental liberty and a recipe for tyranny. John Adams argued that the right to have a weapon is a "primary canon of the law of nature." George Mason maintained that disarming the people is "the best and most effectual way to enslave them."

Nearly every Founding Father believed that an attempt to disarm the population would be casus belli. The men at Concord and Lexington didn't stand up to the far superior British force because they were concerned about income inequality. They were protecting a cache of weapons. (I take a deep dive into the topic in my forthcoming cultural history of guns in America, First Freedom.)

Yet Red Sox President Sam Kennedy says the team has spoken to Martinez about being more cautious on social media. The question is: Why should an athlete be subjected to warnings from his team's president—or a nonsensical controversy ginned up by reporters—for showing appreciation of an enduring American value?