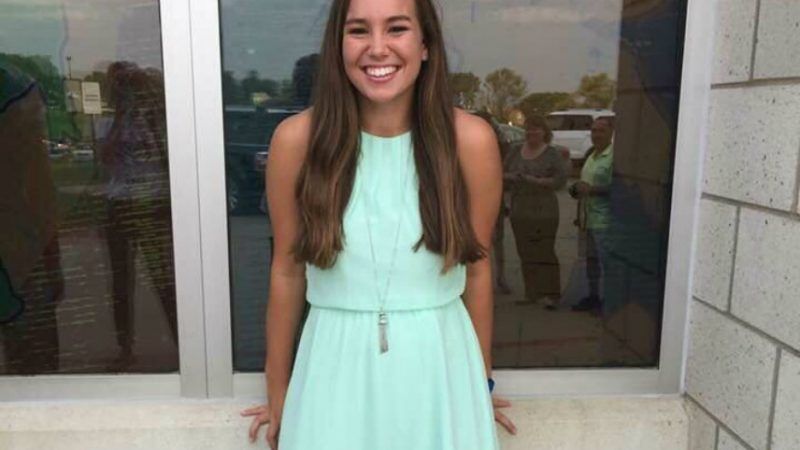 The killing of [Mollie] Tibbetts, who went missing on July 18 but whose body was found only this week, is an unspeakable tragedy. Her killer should be prosecuted and punished to the fullest extent of the law. Yet many conservatives who have long assailed the government as incompetent at best are now so blinded by xenophobic rage over her murder that they've turned into the thing they claim to despise: vociferous boosters of big government.

That's the start of a New York Times article I have in the paper today. The details are appalling. Tibbetts, a student at the University of Iowa beaten and murdered. The police have a man in custody. He's definitely an immigrant, and possibly an illegal one (his lawyer disputes that). His legal status is far less important than the way the murder is being used to advance a number of restrictionist items on Donald Trump's and the GOP agenda. As George Rasley, the editor of Conservative HQ, a site run by "funding father" of the Right, Richard Viguerie, says

The real killers are the politicians who keep our borders open and who continue protecting illegal aliens," Mr. Rasley wrote. "Mollie Tibbetts was killed so that somebody in Iowa could have cheap labor, and she was killed so that the Business Roundtable, the U.S. Chamber of Commerce, and the rest of the Washington-Wall Street-Silicon Valley Axis could hit this quarter's earnings target."

Never mind that immigrants, including illegals, commit fewer crimes, including violent crimes, than natives (stats are in my full piece). The result of the past few years' rhetoric is that every time there is a crime committed by an immigrant—and unlike after school or mass shootings, when they usually only send hopes and prayers—Republicans and conservatives double their efforts to turn America into something a little more like an open-air prison:

Conservatives who used to denounce worker databases such as E-Verify and national ID cards as affronts to the rights of states, business owners and individuals to make their own security and hiring decisions now support all such measures to round up undocumented immigrants. Conservatives who used to denounce government snooping and even the census now support internal checkpoint laws that result in thousands of legal citizens being mistakenly deported each year. Conservatives who used to talk passionately about family values have shown little empathy when the Trump administration has separated migrant families crossing the southern border or when ICE agents have arrested fathers accompanying their wives to give birth.

Democrats do something similar, of course, after school shootings. They roll out a host of proposals that would use an outlying case—a terrible and tragic one, to be sure—to clamp down on freedom for law-abiding people. I'm not fishing for whataboutism here, a way of saying both sides are hypocritical. I'm saying both sides are wrong to make that play. In the case of violent crime committed by immigrants, legal or not, the facts do not in any way suggest we need to create an impermeable border wall and a series on ongoing, invasive, ever-widening checks on virtually aspect of our lives. There's no way to track just illegal immigrants who are likely to commit crimes (other than the same way we might for any citizen, which is through local police work) that won't roll us all up into a surveillance system that will give the government massive amounts of information about us without making us safer.j

In today's climate, it's hard to recover where the GOP was in 1980, when George H.W. Bush and Ronald Reagan debated who would be more inclusive toward illegal immigrants.

We're creating a whole society of really honorable, decent, family-loving people that are in violation of the law," Mr. Bush lamented. "Rather than talking about putting up a fence," Mr. Reagan suggested, "open the borders both ways."

in the mid-1990s, as Matt Welch has pointed at Reason, it was the Democrats who got tough on immigration, with Bill Clinton sounding Trumpian with promises to build a wall and deport as many Mexicans as he could find (while running for Senate in New York in 2007, Hillary Clinton was staunchly against giving illegals driver licenses). There are many reasons why the parties have changed rhetoric on immigration (for all the love he showed late in his term, Barack Obama was no friend of immigrants). Some of them are geographic, some are demographic, some are economic (with the effective end of private-sector unionism, Dems no longer fear the wrath of the anti-immigrant AFL-CIO and others they once did), etc.

One major point is to recognize and combat the conservatives such as Richard Viguerie, who back in the day was the sort of guy who saw one-world government in every UNICEF box and a police state in every attempt to pass a national I.D. card. They are using a terrible crime to push an agenda they once abhorred.

Another related point: The number of Americans who think immigration is a good thing for the country is at a record level. Even two-thirds of Republicans think so. We shouldn't let the murder of Mollie Tibbetts become the pretext for bad laws any more than we should let the Parkland school shooting lead to laws that would restrict the Second Amendment to no good end.

Related Video: Sanctuary Cities are as safer or safer as similarly sized cities with different policies. Here's why.