An ironic lesson in progressive policies, provided by an iconic New York City establishment and the left's rising star. 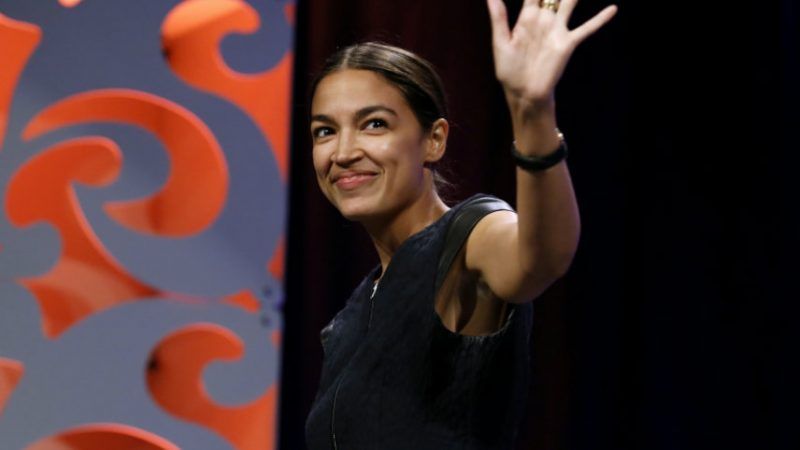 Before she was the rising star of the progressive left, Alexandria Ocasio-Cortez worked shifts at the iconic Coffee Shop in Union Square, Manhattan.

That espresso-sized biographical nugget tells you a lot about Ocasio-Cortez. It grounds her as a real woman of the people, for one. She's held a low-paying service sector job. She had to commute from the working class, minority community of the Bronx to fill the coffee cups of well-off New Yorkers living in Manhattan.

But it also tells you something about the trajectory of progressivism. On Monday, Ocasio-Cortez paid what is probably her final visit to her former employer—because the Coffee Shop is closing later this year—and posted a sweet, nostalgic note about it on Twitter:

The restaurant I used to work at is closing its doors.

I swung by today to say hi one last time, and kid around with friends like old times.

I'm a normal, working person who chose to run for office, because I believe we can have a better future.

You can do it too. We all can. pic.twitter.com/WeNsFm4eTt

What Ocasio-Cortez failed to note is that the Coffee Shop is shutting its doors for the last time, at least in part, because of New York City's rising minimum wage.

"The times have changed in our industry," Coffee Shop owner Charles Milite told the New York Post last month. "The rents are very high and now the minimum wage is going up and we have a huge number of employees."

In other words, one of the very progressive policies that Ocasio-Cortez is riding towards a seat in Congress—she has called for a $15 federal minimum wage, up from $7.25 currently—has had very real consequences for people she probably knows fairly well. Unlike Ocasio-Cortez, it's a safe bet that most of the roughly 150 people who work at the Coffee Shop won't land a job in public office when they lose their current jobs in October.

Will that make the progressive darling rethink her stance on the minimum wage? There's no indication of that from Monday's tweet.

This is not the first time Ocasio-Cortez has missed an opportunity to acknowledge that expensive government mandates can have real world consequences. The Daily Show's Trevor Noah, for example, pressed Ocasio-Cortez (lightly) about whether her $15 federal minimum wage proposal would stagnate economic growth.

No, she said, claiming that Seattle had seen no such stagnation after implementing the same minimum wage. She also bizarrely claimed that 200 million Americans get by on less than $20,000 per year—a "fact" that's pretty difficult to swallow given that the entire American labor force is 162 million.

But the Seattle argument is more interesting, because there's a fair bit of evidence that the minimum wage has caused job losses in that city. Consider what researchers at the University of Washington's School of Public Policy and Governance found: Namely, that the number of hours worked in low-wage jobs in Seattle has declined by around 9 percent since the start of 2016, "while hourly wages in such jobs increased by around 3 percent." The net outcome? In 2016, the "higher" minimum wage actually lowered low-wage workers' earnings by an average of $125 a month.

This sort of trade-off should be expected. Higher minimum wages will force some businesses to cut staff, while others might close entirely. If you still have a job after that, sure, you'll make more money. If you don't, well, finding a job just got more difficult.

But the point isn't to argue with Ocasio-Cortez about the consequences of Seattle's minimum wage hike (her defenders will point to other studies, like one commissioned by city officials and conducted by researchers at Berkeley, which show no ill-effects whatsoever). The point is that even if businesses in Seattle or New York City could absorb the economic hit of a $15 minimum wage, what would happen to businesses in places that aren't modern metropolises with high costs of living and relatively higher wages? Does a $15 federal minimum wage make sense in western Pennsylvania, in eastern Kentucky, or in central California?

If Ocasio-Cortez can't look at the loss of an iconic New York City business—a place where she used to work, no less—and see a potential problem with her worldview, there is little hope she that will ever come to understand the potential problems created by one-size-fits-all employment policies.