California's Sheriff Coroner Offices Have a Glaring Conflict of Interest 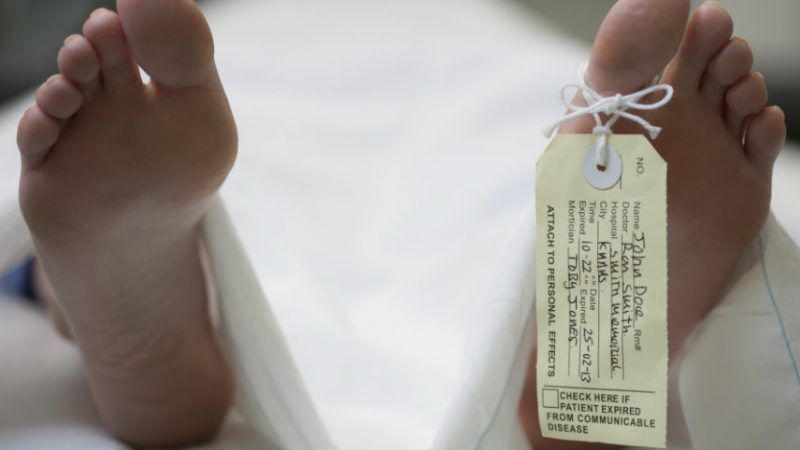 One of the few things I remember from college Psychology 101 was Maslow's pyramid-shaped "Hierarchy of Needs." If we're destitute, we spend all our time trying to meet our physiological needs for food and shelter. With those needs met, we then worry about safety. After feeling safe, we move up the pyramid toward the narrower goals of love and belonging, esteem and then self-actualization. Bottom line: You're not going to spend much time worrying about lofty goals when you're scrounging your next meal in a war zone.

In similar (but less academic) fashion, I've developed the Greenhut "Hierarchy of Priorities" to help us work through the complex world of political priorities. As a libertarian, I'm always worried about government spending and taxation. But that's not the only thing advocates for limited government should care about. I put spending/taxation at the bottom of my pyramid because it's a no-brainer. It takes such little brain that even most Republican officials get it right most of the time.

This brings me to Senate Bill 1303 by Sen. Richard Pan (D-Sacramento). The measure would force large California counties—those with at least 500,000 people and are not "charter" counties—to create an office of medical examiner to investigate deaths. That touches at least seven counties (Contra Costa, Kern Riverside, San Joaquin, Sonoma and Stanislaus). California is one of only three states that allows counties to use a sheriff-coroner system, whereby elected sheriffs oversee law enforcement and death examinations. Forty-nine of California's 58 counties use this system. The bill will be taken up when the Legislature returns on Monday.

This might sound like some technical matter, but it touches on those fundamental civil-liberties concerns. The current system is an outrageous conflict of interest. "Ensuring that autopsies are done in an ethical and equitable manner is essential in ensuring confidence in our criminal-justice system," explained Pan. "These autopsies are often the basis for criminal charges and it is imperative that the public gains the necessary facts to determine fault and deliver justice."

Currently, sheriffs—who have an official, vested interest in these cases, especially regarding officer-involved shootings—make the final cause-of-death determinations.

A scandal in San Joaquin County illustrates the problem. Last December, the county's chief medical examiner, Dr. Bennet Omalu, alleged that the county sheriff interfered with his investigations. As the Sacramento Bee put it, "Hands chopped off bodies; corpses left to deteriorate; doctors pressured to classify officer-involved deaths as accidents rather than homicides: San Joaquin's two forensic pathologists resigned in recent days over what they said was intolerable interference by Sheriff-Coroner Steve Moore." The allegations are troubling.

The Assembly committee report said the allegations "call into question the integrity of the fundamental checks and balances of our criminal-justice system, as these medical determinations are often the basis for whether … charges filed." Indeed. Moore has denied the allegations. KQED paraphrased him saying that, "Determining cause of death—what killed a person—is the purview of the forensic pathologist…but he has the final say on determining the manner."

But just from a good policy standpoint, shouldn't a medical professional should be the one to make the final determination on the cause of death?

Sheriff-Coroner Moore failed to win re-election during the June primary, but the Pan bill makes a lot of sense. It's not just about San Joaquin County. A separate medical-examiner's office run by licensed physicians would reduce bias and political pressure. It would also guard against appearances of a conflict. Consider that allegations of compromised murder cases could lead the courts to revisit them, which could endanger the public.

Under the legislation, the medical examiner would be appointed by the county board of supervisors or chief executive officer, thus removing election pressure from this crucial office. Sheriffs and district attorneys run for office and don't want to anger powerful police unions and interest groups. That explains, in part, why police are rarely punished for on-the-job shootings. But the coroner is about providing scientific evidence about the cause of death. It should be sheltered from politics.

However, almost every Republican lawmaker voted against the Pan bill. The main arguments against it revolve around cost. (That's ironic given that the law-and-order crowd rarely minds spending more money on expanding prisons or hiking public-safety pensions.) The California State Association of Counties, which opposes the bill, pegs the state's reimbursable cost at more than $5 million. Of course, public costs are always an important concern, but those modest costs shouldn't stop the state from fixing a higher-level problem.

Steven Greenhut is Western region director for the R Street Institute. Write to him at sgreenhut@rstreet.org. This column was first published in the Orange County Register.