Plus: A new kind of mining town comes to Texas and why "the 3D printed gun issue is a First Amendment issue." 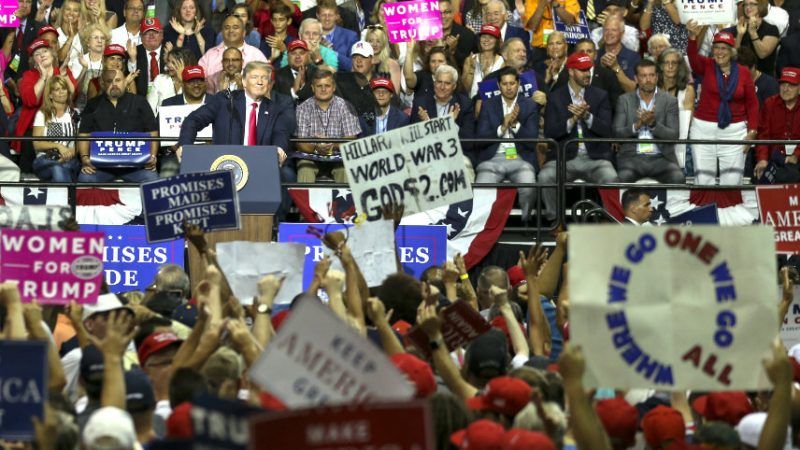 Of course, Americans aren't (yet) required to prove their citizenship, identity, or anything else before purchasing food. As Peter Suderman points out, Trump's ignorance on this fact kinda makes previous presidential privilege gaffes look quaint.

The Tuesday-night rally in Tampa also served as a coming out party for "QAnon" believers. This is the group, seeded on forums like 8chan, that is convinced that a federal agent named "Q" has been feeding them dirt on all sorts of Deep State shenanigans: an international pedophilic sex-trafficking ring, a Hillary Clinton/George Soros coup plot, the Rothschilds' satanic cult, etc. Trump is supposedly aware of all this and in the midst of his own counter-plans.

QAnon supporters "were front and center at the Florida State Fairgrounds Expo Hall, where Trump came to stump for Republican candidates," reports The Washington Post. "As the president spoke, a sign rose from the audience. 'We are Q,' it read. Another poster displayed text arranged in a 'Q' pattern: 'Where we go one we go all.'"

The letter Q also showed up prominently on rally goers t-shirts and in their tweets, as did references to the murdered DNC staffer Seth Rich. (I poured through a few pages of Tampa rally photos on Newscom, to make sure this wasn't just a couple of folks getting blown out of proportion, and I spotted distinct QAnon paraphernalia throughout photos of different parts of the crowd.)

The QAnon believers were a relatively small but (deliberately) conspicuous contingent at the rally, as was a small group of protesters (the Washington Examiner reports that there were three) who had gotten inside. The few pictures I could find show a woman in a head scarf engaged in some sort of shouting match with a man in a cowboy hat, and then others, as a woman in a Trump cap takes a selfie with the fracas in the background.

"One person, and tomorrow the headlines will be, 'Massive protests,'" Trump said as the protesters were esecorted out. (So far, no such headlines have materialized.)

In case you're curious, here's how Trump's perennial-punching-bag CNN described the "rowdy" rally:

"It's a lot easier to act presidential than to do what I do. Anybody can act presidential!" Trump declared, before tottering across the stage in a parody of a presidential walk, mocking the Oval Office conventions he has shredded since his inauguration, and admitting he likes to be a "little wild, have a little fun" at rallies.

It was an anarchical moment that highlighted the comedy that is an underestimated ingredient of Trump's demagogic technique. It helps bind him to supporters who feel bitter about Washington institutions they believe have cast them cruelly aside. But it was also a flash of self-awareness by an idiosyncratic politician who intimately understands his own method as one of the great political entertainers, whose skill at fanning resentments is fundamental to his appeal for a large chunk of voters.

Y'all understand that the 3D printed gun issue is a First Amendment issue and not Second Amendment one, right?

Unless you want to ban the Anarchist's Cookbook and other 'dangerous literature', you might want to rethink your position.

A new kind of mining town comes to Texas.

BIG: Michigan's Supreme Court will allow an anti-gerrymandering measure on the ballot. State GOP/Chamber of Commerce had fought hard to keep it off. https://t.co/qTuhAsGPSe

Senate Dems are calling out the Trump administration for approving the online publication of 3D gun blueprints so that people can print guns at home.

"Why buy them if you can print them at home instead?" Sen. Ed Markey (D-MA) said. "This is Trump's chance to stand up to the NRA" pic.twitter.com/qbkMrR8YWG