It Sure Seems Like Elizabeth Warren Is Running for President. Could She Topple Trump?

If Warren really wants to win in 2020, she's going to need to do something she hasn't yet accomplished: broaden her message beyond the far left wing. 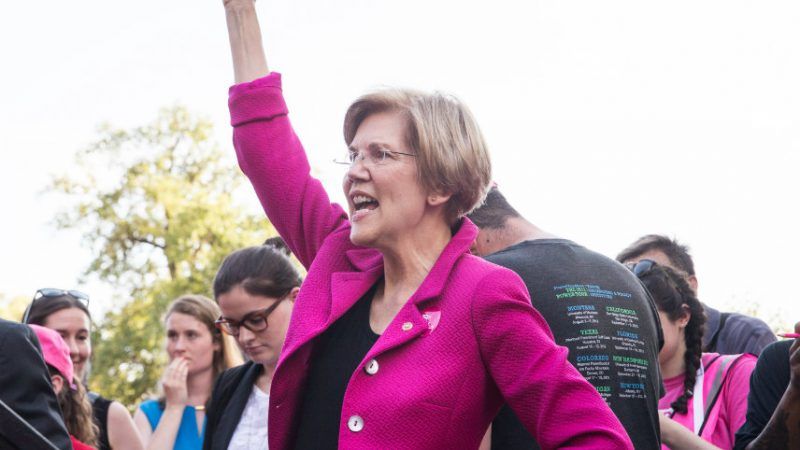 A recent poll shows Senator Elizabeth Warren of Massachusetts leading the 2020 Democratic presidential primary field in neighboring New Hampshire. The New York Times is following her encouragingly around early-voting Nevada. Maybe it's time, though, to start paying some more skeptical attention to Warren.

A recent Senate speech by Warren denouncing Trump's Supreme Court nominee, Brett Kavanaugh, gives a flavor of what she'd be like as a presidential candidate. It's a divisive, class-warfare approach unmoored from reality.

It bears mentioning, too, that Warren's own wealth in 2015 was estimated at nearly $8 million. In 2010 she and her husband, who is also a Harvard Law professor, reported joint income of $954,721.

So when Warren complains, as she does, that "Judge Kavanaugh's record shows that he will continue to tilt the scales of justice in favor of the rich and powerful and against everyone else," she means the non-Warren rich.

In the course of a brief Senate speech, she returns again and again to this theme of how rich people and corporations, or rich corporations, are somehow pitted against everyone else.

"Stripping away rights from women, from voters, from workers, from immigrants, while expanding the rights of corporations and rich people isn't fair" Warren says. "Our courts should not be another puppet of the rich and powerful."

She makes it sound like it's a zero-sum game. But not all political or legal issues break down so neatly along these lines. Plenty of "rich people" favor abortion rights — Michael Bloomberg and Warren Buffett, for example. Plenty of corporations also want to expand their ability to hire immigrants. Plenty of rich people favor gun control laws that plenty of non-rich people oppose.

"Judge Kavanaugh believes that while in office, a sitting president should be above the law," Senator Warren complains. If Senator Warren ever does get elected president and finds herself in the sights of private plaintiffs or pesky prosecutors demanding her time for perjury-trap testimony, she may come to appreciate the wisdom of Kavanaugh's position.

Until then, she demagogues the issue: "After the spectacle, broadcast live on television around the world, of President Trump attacking American intelligence agencies and American law enforcement officers while sucking up to Vladimir Putin, we should all question Judge Kavanaugh's willingness to protect the president, no matter what."

As if Trump, "corporations and rich people" were insufficient villains, Warren also demonizes the Federalist Society. She describes it as "extremist," "a radical right-wing group deeply committed to overturning Roe versus Wade" and "undermining critical rights like women's rights, workers rights, voting rights, and environmental protections."

Describing those one disagrees with as "extremist" is a time-honored political tactic. If Warren persists in her presidential ambitions, she may find the tactic turned against her, and perhaps even with more accuracy than she is using it against the Federalist Society.

Anyway, Trump defeated a wealthy, baby-boomer Northeastern woman lawyer and Democratic senator for president once already, back in 2016. The past three times any major political party picked nominees from Massachusetts—John Kerry, Mitt Romney, Michael Dukakis—they lost. (William Weld, who like Romney and Dukakis was governor of Massachusetts, may run for president in 2020 as a Libertarian.)

If Senator Warren really wants to become President Warren, at some point she's going to need to do something she hasn't yet accomplished, which is explain to voters nationwide how she or her message are unlike Kerry, Dukakis, and Hillary Clinton. Otherwise she'll wind up on that list of also-rans instead of starring in the inaugural parade.