How the Declaration of Independence Explains Political News in 2018

Complaining about the government never goes out of style. 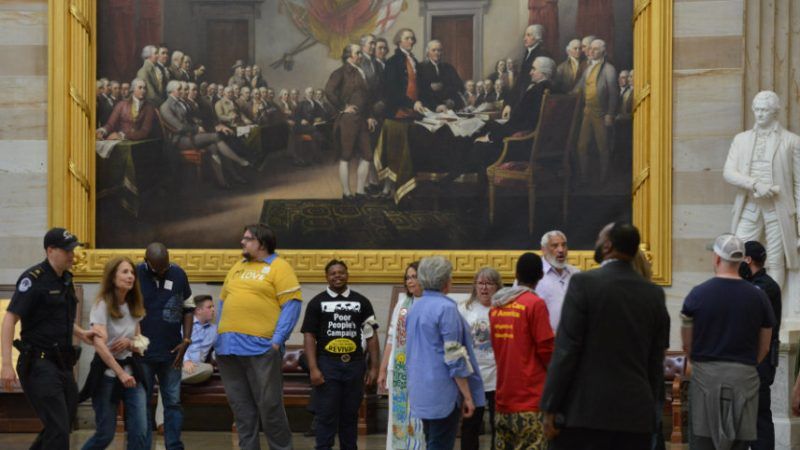 If you take a moment this July 4 to re-read the Declaration of Independence, it may help you make better sense of the latest headlines.

The founders of the United States of America didn't just declare independence from Great Britain. They wrote a statement explaining their reasoning. Two-hundred-and-forty-two years later, we're navigating some of the same issues.

President Trump's immigration crackdown? The Declaration of Independence complained that King George III "has endeavoured (sic) to prevent the population of these States; for that purpose obstructing the Laws for Naturalization of Foreigners; refusing to pass others to encourage their migrations hither."

President Trump's tariff threats and the risks they may pose to international trade? The Declaration of Independence had faulted George III "for cutting off our Trade with all parts of the world."

President Trump's encouraging Justice Anthony Kennedy to resign so Trump could reshape the Supreme Court? The Declaration criticized George III for having "made Judges dependent on his Will alone, for the tenure of their offices."

President Trump's tension with European leaders over the G-7 summit communiqué, trade, and funding NATO? It has echoes of the Declaration's statement that "these United Colonies are, and of Right ought to be Free and Independent States; that they are Absolved from all Allegiance to the British Crown, and that all political connection between them and the State of Great Britain, is and ought to be totally dissolved."

Even the language of the anti-Trump "resistance" and its warnings of incipient fascism recalls the Declaration of Independence's language accusing George III of wanting "the establishment of an absolute Tyranny over these States," and of acts that characterize "a Tyrant…unfit to be the ruler of a free people."

It turns out, though, that the issues outlined in the Declaration of Independence—international trade, immigration, choosing judges, political connections with Europe, the threat of "tyranny"—have a way of preoccupying citizens and bedeviling politicians even when the executive is elected rather than crowned.

Some may find it disheartening to discover that nearly 250 years on, the controversies over these issues are unresolved. Will Americans be feuding with Europe, and with each other, over tariffs, treaties, and tyranny, over judges and immigration, 250 years from now?

Another way to look at it, though, is that the duration of these debates is actually kind of reassuring. The United States has endured and even flourished through nearly two and a half centuries of quarreling about these issues. The platforms have changed—now we're arguing on cable television and on the Twitter mobile phone app, instead of in letters written with quills and carried on horseback. The topics of debate, though, are remarkably constant.

By that standard, President Trump and the response to him aren't unprecedented, or even deeply unusual. They are part of a long-running pattern, set in motion in 1776 or even earlier.

The persistent conflicts haven't prevented remarkable progress. America abolished slavery, expanded the vote to include women, and built itself from a brand-new collection of former colonies into the world's unparalleled military and economic superpower. We haven't yet, however, managed to settle once and for all some of the issues that animated the nation's founding.

In some sense that may even be healthy. Our foreboding about tyranny may have prevented us from sliding into it. Our founding opposition to political connections with Europe may have helped us avoid being dragged down into some of that continent's decline.

And if, since 1776, America's internal conflicts about trade, immigration, and judges have been settled mostly peacefully, we have to thank for it a founding generation that followed up the Declaration of Independence with a remarkably resilient and inspired Constitution. It is something to celebrate, too, this year on Independence Day.