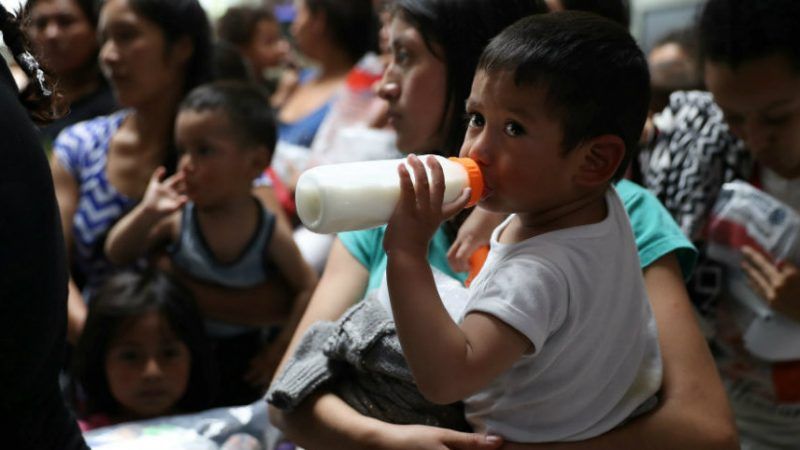 Preliminary injunction on ICE family separation policy. A federal court says the Trump administration's policy of separating migrant children from parents caught crossing the U.S.-Mexico border must stop, and that families who have already been separated must be reunited within one month.

Immigration and Customs Enforcement (ICE) officials have 10 days to put detained immigrant parents in phone contract with their children, ruled Judge Dana Sabraw of the U.S. District Court for the Southern District of California on Tuesday.

"Plaintiffs have demonstrated a likelihood of success on the merits, irreparable harm, and that the balance of equities and the public interest weigh in their favor, thus warranting issuance of a preliminary injunction," wrote Sabraw. More from his ruling:

This Order does not implicate the Government's discretionary authority to enforce immigration or other criminal laws, including its decisions to release or detain class members. Rather, the Order addresses only the circumstances under which the Government may separate class members from their children, as well as the reunification of class members who are returned to immigration custody upon completion of any criminal proceedings….

The government readily keeps track of personal property of detainees in criminal and immigration proceedings. Money, important documents, and automobiles, to name a few, are routinely catalogued, stored, tracked and produced upon a detainees' release, at all levels—state and federal, citizen and alien. Yet, the government has no system in place to keep track of, provide effective communication with, and promptly produce alien children. The unfortunate reality is that under the present system migrant children are not accounted for with the same efficiency and accuracy as property. Certainly, that cannot satisfy the requirements of due process.

The case was brought by the American Civil Liberties Union (ACLU) in February on behalf of a Congolese woman whom ICE separated from her 7-year-old child and the "hundreds of other parents whom the government has forcibly separated." The suit asserted that ICE was engaging in the "forcible separation of parents from their young children for no legitimate reason," in violation of the Fourth Amendment.

"Whether or not the Trump administration wants to call this a 'policy,' it certainly is engaged in a widespread practice of tearing children away from their parents," Lee Gelernt, deputy director of the ACLU's Immigrants' Rights Project, told CNN about the case last March.

In his Tuesday order, Judge Sabraw described the situation as a case of "reactive governance—responses to address a chaotic circumstance of the Government's own making" that "belie measured and ordered governance, which is central to the concept of due process enshrined in our Constitution."

In yesterday's primary elections, Oklahoma voters approved an initiative legalizing medical marijuana. This makes Oklahoma the 30th U.S. state to decriminalize marijuana use by people who get a doctor's permission. And though Oklahoma tends to be a conservative state, its medical marijuana measure is one of the most expansive in the country. "The measure," notes The Washington Post,

… is notable for reflecting one of the most permissive medical cannabis policies in the country. While most states specify a narrow list of medical conditions for which doctors can recommend the plant, in Oklahoma doctors will be able to recommend it for any condition.

BREAKING: Canada is now preparing steel quotas and tariffs on China and others to prevent producers there from dumping the goods that they can't sell to the US https://t.co/5QL6kcRBBQ

Bolton in Moscow and Trump look-alikes in Russian pop video. National security adviser John Bolton will powwow with Vladimir Putin in Moscow today. "The president will receive Bolton at the Kremlin," spokesman Dmitry Peskov said. The two men are prepping for a meeting between Putin and President Trump that is supposed to take place in mid-July. "The Trump-Putin summit would be the first meeting of the two presidents not taking place on the sidelines of a broader international gathering," notes The Washington Post.

"The video's political message is not entirely clear," asserts NBC News. "Julia Ioffe, a correspondent for GQ who has written extensively about Russia under President Vladimir Putin, raised one possibility, tweeting that American viewers were being 'trolled and made fun of by Emin Agalarov.'"

"Does Godwin's Law need to be updated? Suspended? Repealed? I get asked this question from time to time because I'm the guy who came up with the law more than a quarter century ago." https://t.co/AkBPT9BavV @sfmnemonic