George Will: Bill Weld, and Maybe the Libertarian Party, Are 'Ready for Prime Time'

Nation's leading conservative columnist argues that the L.P. could be the only viable party in 2020 for "limited government, fiscal responsibility, free trade, the rule of law, entitlement realism and other artifacts from the Republican wreckage." 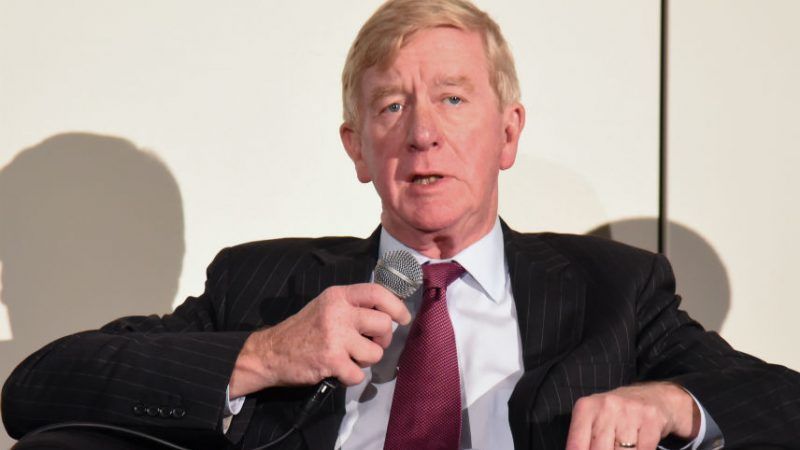 Two years ago, conservative commentator George Will left the Republican Party over Donald Trump. Today, Will hinted strongly that he will give preference to the Libertarian Party if it endorses Bill Weld.

"Can this libertarian restore conservatism?" asked the headline on Will's Washington Post column. (The erudite Cubs fan is frequently described as the most syndicated newspaper columnist in the country, so these words will be relayed from coast to coast.)

Will's basic argument: Weld embodies "what a broad swath of Americans say they favor: limited government, fiscal responsibility, free trade, the rule of law, entitlement realism and other artifacts from the Republican wreckage." Therefore, "If in autumn 2020 voters face a second consecutive repulsive choice, there will be running room between the two deplorables. Because of its 2016 efforts, the Libertarian Party will automatically be on 39 states' ballots this fall and has a sufficient infantry of volunteers to secure ballot access in another nine. So, if the Libertarian Party is willing, 2020's politics could have an ingredient recently missing from presidential politics: fun. And maybe a serious disruption of the party duopoly that increasing millions find annoying. Stranger things have happened, as a glance across Lafayette Square confirms."

This positive publicity for the L.P. does not arrive without a couple of elbows. The party "sometimes is too interested in merely sending a message (liberty is good)," Will writes, and maybe the 2016 ticket should have been switched: "Gary Johnson…was too interested in marijuana and not interested enough in Syria to recognize the name Aleppo. Weld, however, is ready for prime time."

The column certainly blows some wind in the sails of Weld, an always-controversial figure within the party who has nevertheless been busy laying the groundwork for a 2020 presidential run, though he has not yet officially declared. "I think that's a race that has some real potential to go the distance, and the sooner we all wrap our minds around that, the better," he told me in an interview seven weeks ago. It will be interesting to see what kind of enthusiasm for and blowback against Weldmentum emerges at the June 30-July 3 Libertarian Party national convention in New Orleans. (I'll be moderating some debates and panels, including a post-mortem on the 2016 election that Weld will participate in.)

It's a sign both of the Libertarian Party's steep growth curve and of the weird major-party political moment we're living through that respectful mainstream attention is being paid to the L.P.'s presidential considerations more than two years before the election. (So far the most well-known declared candidate for the job is the in-your-face libertarian political activist Adam Kokesh.)

Will's column also comes at a moment when other Trump-averse conservatives are agonizing openly about whether to stay in the GOP. Longtime Republican campaign strategist Steve Schmidt (a senior advisor on the John McCain campaign in 2008), announced this week that he is bolting to become an independent, rather than see his party go the way of the Whigs. This is also a favorite analogy of Weld's—last November he told me, "As you recall, I spent a lot of last year predicting that the Republican Party was going to split in half like the Whigs in the 1850s. And it didn't quite happen then, but you could argue that it's kind of happened with the Republican Party this year, in that you have the party of the president and those who follow him, and then you have many people who are Republicans who differ with the president, either on program or on style."

Both Weld and Will have been tacking more libertarian in recent years—Weld on issues like guns, drugs, and foreign policy; Will on nation-building, judicial engagement, and the liberty movement. You can read conversations Nick Gillespie and I had with Will from 2016 and 2013, and watch the latter one below: