Plus: trade wars, sex-worker protests, and the "Intellectual Dark Web" down under. 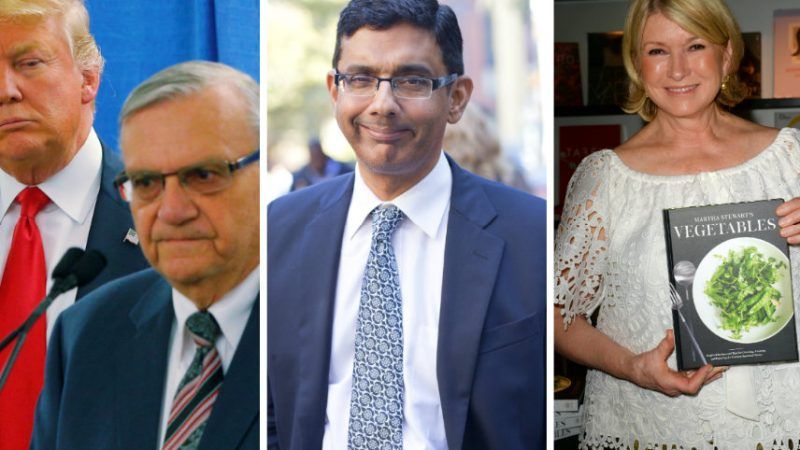 D'Souza pleaded guilty in 2014 to a straw-donor scheme designed to benefit New York Republican candidate Wendy Long, who was trying to oust Democratic Sen. Kirsten Gillibrand. He was sentenced to five years probation, including eight months in a "community confinement center." Upon news of the pardon, D'Souza tweeted that "KARMA IS A BITCH" and lashed out at former federal prosecutor Preet Bharara, who handled his case.

Trump's pardon of D'Souza and suggestion of other pardons "delivered an indirect but unmistakable message to personal attorney Michael Cohen, former national security adviser Michael Flynn and others ensnared in Trump-related investigations that they, too, could be spared punishment in the future," suggests the Washington Post politics team:

D'Souza, Blagojevich and Stewart had been convicted of such crimes as campaign-finance violations or lying to investigators—charges similar to those brought against Flynn, former Trump campaign manager Paul Manafort and other Trump associates indicted in special counsel Robert S. Mueller III's Russia investigation. Cohen, meanwhile, is under investigation by federal prosecutors in New York for possible campaign-finance violations and other possible crimes.

"The handful of pardons that President Trump has granted so far may appear to be scattershot, but they're beginning to show a distinct pattern—not just of who he believes is worthy of mercy, but of how he thinks about the justice system as a whole and about his power to bend it to his will," writes the New York Times editorial board today.

The Times suggests that Trump's pardons could be "a signal of loyalty and reassurance to friends and family members who may soon find themselves facing similar criminal charges," but it also suggests an alternative motive: Trump trying to get back at those he perceives as enemies in federal law enforcement.

Besides Mr. Bharara, there's James Comey, who prosecuted Ms. Stewart, and Patrick Fitzgerald, who prosecuted both Mr. Blagojevich and Mr. Libby, and is a friend of Mr. Comey's.

In any case, they conclude, the message behind the pardons should worry us "more than Mr. Trump clearing the record of some noxious clown." And they cite this tweet:

Pardoning is basically the one presidential power that works the way Trump thought ALL of being president worked. He's gonna use the shit out of it.

Still another explanation: Trump just doesn't like seeing his celebrity friends facing the same consequences as us plebes do. "He has a gravitational pull towards [pardoning celebrities] because that is the world he used to exist in—a lot of those folks are people who used to be his friends," Scottie Nell Hughes told The Daily Beast. "However, I believe this is opening a door, and if he doesn't follow through with [more] people who are not well-known, I think that will be extremely disappointing."

For more on Trump's new tariff moves, see Eric Boehm's analysis here. "The trade war that seemed improbable for weeks is now slipping closer to inevitable," he writes. "All sides are still talking to each other and there's faint hope for a last second deal, but that looks increasingly unlikely."

On Thursday, Trump announced that a 25 percent on steel and a 10 percent aluminum tariff would take effect at midnight.

"The tariffs on steel and aluminum," Eric explains, "are being imposed on the administration's vague and unfounded claims that foreign metal somehow undercuts America's national security. The White House is already gearing up to make a similarly laughable argument for tariffs on cars. But how tariffs on European cars and Canadian steel will address the administration's worries about a trade imbalance with China—something that isn't even really a problem—remains completely unclear."

Why aren't they firing no talent Samantha Bee for the horrible language used on her low ratings show? A total double standard but that's O.K., we are Winning, and will be doing so for a long time to come!

The Houston DA's office – known for its zeal for capital punishment – has a rock band "Death By Injection." It belittles the taking of a life and frankly is some Nazi Germany level dehumanization. And the reporters just shrug their shoulders like, "huh, how fun and kooky." https://t.co/te5btpJc4p

America's elite communities are leaving the rest of the country behind, writes @JimPethokoukis. Now what? https://t.co/LaZEFJNksb pic.twitter.com/R6uumw4b8y