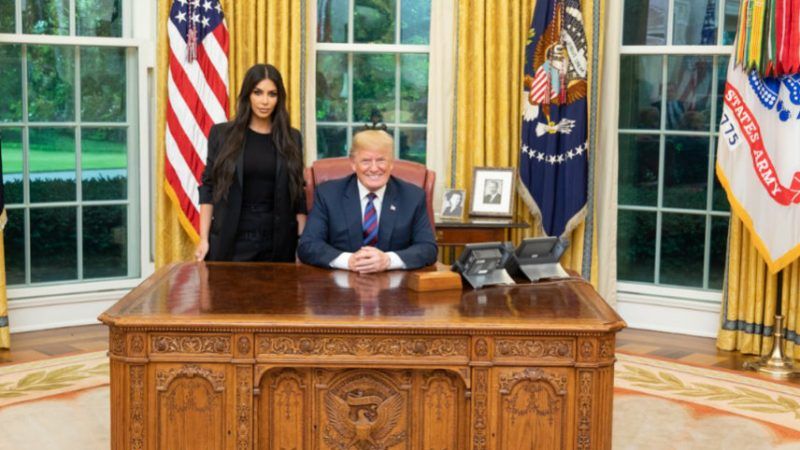 Hate, hypocrisy, and short memories on display after Kardashian meeting. For years, the push for federal criminal justice reform hasn't meant much more than a series of high-profile summits and conferences at which the same tireless advocates and impotent politicians talk about the things they have no shot in hell (and often no real intention) of getting done. Enter Kim Kardashian. The reality TV star and fashion mogul sat down with President Donald Trump at the White House yesterday to chat about prison and sentencing reform.

No one I've encountered thinks Kardashian can usher in the serious, dramatic types of reform we need. But can she set something in motion? Perhaps. Regardless, and independent of any actual federal policy changes, Kardashian's high-profile attention to our draconian criminal sentencing policies raises the issue leaps and bounds beyond its previous profile. I can't imagine a way in which one of the most recognizable women in the world calling for criminal justice reforms—and visiting the president to talk about these things—could be bad for the cause.

But there is a certain (not small) segment of people who would rather dunk on Kardashian or Trump than appreciate any small glimmers of brightness in these murky political times. So a large amount of reaction to Kardashian going to Washington was centered on insulting her intelligence or implying that it is somehow uniquely alarming and dystopian for a Hollywood celebrity to bend a president's ear.

We have entered peak satire-cum-dystopia.
Incidentally even Kim Kardashian looks more professional and suited to that office than he does. pic.twitter.com/eC4fZIZfjV

Burn it all down.

And the Obama administration's Title IX expansion and campus sexual assault initiatives were rife with celebrity endorsers. A promotional trailer for the White House's "It's On Us" initiative even opens with: "It started with a celebrity spot to gain attention, which led to a pledge, that became a viral badge…" Vice President Joe Biden debuted the video (which features him and Obama along with Jon Hamm, Questlove, Connie Britton, Kerry Washington, Mayim Bialik, and other celebs) alongside Lady Gaga at the Academy Awards.

There's nothing unique about Trump inviting Kardashian to the White House to talk about an issue, especially when it's one that a part of his administration has been focused on lately and one where some small changes both are politically possible and could make a tangible positive difference in people's lives.

And hey, Kardashian has proved herself capable of just about anything she decides she wants to accomplish. I've learned better than to expect much from any federal justice reform attempts, no matter how briefly high profile. But I do give Kardashian better odds than anyone in Washington or Hollywood who has previously attached themselves to the cause.

"Specifically, Kardashian [was at the White House] pushing for a presidential pardon for a 62-year-old woman convicted of nonviolent drug offenses," C.J. Ciaramella noted here yesterday:

Kardashian also tweeted out the story of Matthew Charles. Charles was released from federal prison after serving 21 years behind bars for a crack cocaine offense, but two years after he started putting his life back together a federal appeals court ruled he had been set free in error. He has since been returned to prison. As Reason reported yesterday, Charles' story sparked outrage and widespread calls for Trump to commute his sentence.

Trump signs right-to-try bill. Terminally ill patients in the U.S. will now have access to unproven but potentially lifesaving treatments, thanks to a "right to try" bill that Trump signed on Wednesday. Under the new law, these patients are allowed to try medications and procedures not yet approved by the Food and Drug Administration.

"Thousands of terminally ill Americans will finally have hope, and the fighting chance, and I think it's going to better than a chance, that they will be cured, they will be helped, and be able to be with their families for a long time, or maybe just for a longer time," said Trump at yesterday's White House bill signing ceremony.

Among the bill's sponsors were Indiana Sen. Joe Donnelly, "a vulnerable Democrat up for reelection" this fall, reports Jesse Hellmann at The Hill. "Despite calling Donnelly a 'really incredible swamp person' earlier this month, Trump thanked the senator for his work on the bill."

The only other Democrat co-sponsoring the bill was West Virginia Sen. Joe Manchin. "Most Democrats and public health groups oppose the bill," writes Hellmann, "arguing that it could put patients in danger."

you guys make me feel like fighting back. I will examine all of my options carefully and get back to U.

"It is telling that no mainstream figure anywhere on the political spectrum has come to Barr's defense, while everyone from Bill O'Reilly to Tomi Lahren have condemned her," writes Cathy Young at Forward.

• If you see something, say something culture hits human-trafficking panic. Can you guess what happens next?