The Simpsons Admitted Apu Is Problematic, Just Not the Way People Wanted

Lisa and Marge tackle political correctness and The Problem with Apu. 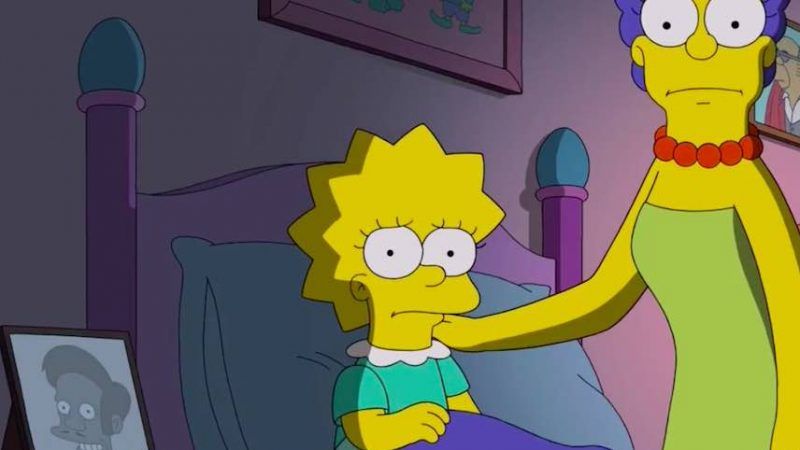 (Screenshot via The Simpsons)

On last night's episode of The Simpsons, the show finally addressed the controversy surrounding the character of Apu, who some viewers consider a racist caricature of an Indian man.

Apu, an Indian immigrant and manager of the Kwik-E-Mart, is voiced by Hank Azaria, a Jewish man. His portrayal of Apu has drawn criticism—most recently in the 2017 documentary, The Problem with Apu—for relying on ethnic stereotype. Indian comedian Hari Kondabolu, the film's star, is a Simpsons fan who grew up being thankful for Apu's existence but has come to view the character as extremely problematic.

In a clip from the episode, Marge sanitizes a bedtime story, prompting Lisa to point out that the politically correct version is pretty boring. "Something that started decades ago and was applauded and inoffensive is now politically incorrect," she says. "What can you do?" A portrait of Apu sits in the corner of the screen as she says this.

The Simpsons goes after politically correct critics, singling out "The Problem With Apu" https://t.co/4QRHsUJnd9 pic.twitter.com/HZRYPWoqaI

Kondabolu was not pleased.

Wow. "Politically Incorrect?" That's the takeaway from my movie & the discussion it sparked? Man, I really loved this show. This is sad. https://t.co/lYFH5LguEJ

In "The Problem with Apu," I used Apu & The Simpsons as an entry point into a larger conversation about the representation of marginalized groups & why this is important. The Simpsons response tonight is not a jab at me, but at what many of us consider progress.

"So Lisa, the show's unshakable crusader for justice, including in matters of popular culture, has been reduced to a mouthpiece for the lazy idea that asking for better representation is an unfair burden on creators; an unreasonable demand that things be 'politically correct,'" wrote Holmes. "That is regrettable, to say the least."

Joe's Carl Kinsella went even further, calling the episode "a gaping wound where the show's funny bone used to be. A malignant tumour in its brain blocking the path of any possible introspection whatsoever."

I don't agree. The clip was clearly introspective. After lamenting that erasing all offense can make for uninteresting comedy, Lisa tacitly references the show's history of depicting Apu as a stereotype. Marge say that "some things will be dealt with at a later date, if at all." Many seem to be interpreting this as the writers letting themselves off the hook (The New York Times called it "a dismissal"), but I'm not so sure. It sounds like The Simpsons is making fun of itself for not handling this whole thing better, while also mocking the humorlessness of political-correctness-run-amok. The expressions on their faces say a great deal: Lisa and Marge look uncomfortable, even regretful, rather than defensive.

This falls well short of a full apology, and thus it isn't surprising that Kondabolu and company aren't satisfied with it. But The Simpsons didn't dodge The Problem with Apu. The writers evidently think the problem is more complicated.