James Woolsey says America only interferes in other nations' elections "for a very good cause," but he can't keep a straight face while saying it. 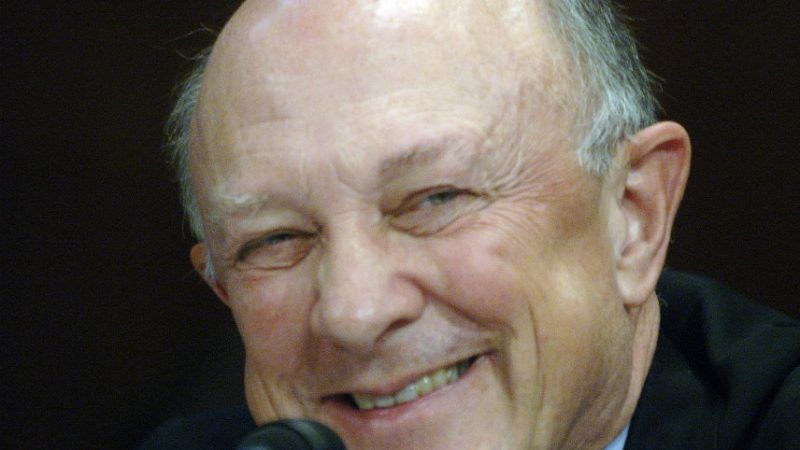 During a Friday appearance on Fox News, former CIA chief James Woolsey shared a laugh with host Laura Ingraham over the United States' history of interfering in elections throughout the world.

The two yukked it up after Ingraham asked Woolsey to confirm that the United States does not "mess around in other people's elections." That sort of thing only happens "for a very good cause," said Woolsey, grinning broadly.

Foreign interference in American elections tends to get a different sort of treatment. On Friday, Deputy Attorney General Rod Rosenstein announced federal indictments against 13 Russian nationals and three companies for allegedly interfering the 2016 presidential election. The Russian effort was aimed at sowing political and social discord in the U.S., Rosenstein said, even though there is no hard evidence that the election's outcome was altered.

Woolsey was on Ingraham's show to comment on the news. Things progressed normally until the very end of the segment, when Ingraham asked Woolsey about the CIA's history of trying to influence elections in other countries.

"Have we ever tried to meddle in other countries' elections?" asks Ingraham.

"Oh, probably," says Woolsey. "But it was for the good of the system."

It's well, well worth watching all of this exchange between Laura Ingraham and former CIA director James Woolsey. Woolsey acknowledges that the US has meddled in other countries' elections in the past and is doing so now, and both he and Ingraham find this laudable and funny. pic.twitter.com/TR3X7VM7Np

He goes on to talk about the CIA's efforts to influence the outcome of elections in Greece and Italy in the immediate aftermath of World War II, to "keep the Communists from taking over."

But what about now, Ingraham asks. "We don't do that now, we don't mess around in other people's elections?"

"Well…" Woolsey starts, before trailing off, making some weird gibberish noises, and flashing a knowing grin in Ingraham's direction. The Fox News host can't keep a straight face either and is seen visibly laughing as the camera cuts back to Woolsey. "Only for a very good cause," he offers. "In the interests of democracy."

Woolsey's candor significantly understates the extent to which the CIA has interfered in the internal affairs of foreign countries over the years. There is a long history of American intelligence agencies using their influence to put the thumb on the scale of democratic contests in countries all over the globe, from Guatemala to Ukraine.

Hypocrisy aside, the slip of Woolsey's and Ingraham's masks suggests just how silly the outrage over the supposed Russia attempts to "hack" the 2016 presidential election really are. Powerful countries with the ability to engage in complex espionage and subterfuge—like Russia and the United States—are constantly working to prop up allied regimes and to undermine rivals. One academic study by Dov Levin of Carnegie-Mellon University suggests that Washington and Moscow "intervened in 117 elections around the world from 1946 to 2000—an average of once in every nine competitive elections."

And how much influence did Russian trolls, bots, and agents have on the 2016 election anyway? Reason's Jacob Sullum previously looked at the social media data and came away deeply unimpressed at the Russian effort's reach. Likewise, Jesse Walker has noted that Russia's attempts to foment rallies on U.S. soil didn't generally amount to much. Nothing in Rosenstein's indictments seems particularly explosive either.

All of this, of course, is separate from the legal and political question of whether President Donald Trump's campaign was in contact with Russian agents or was supplied with information stolen by Russian hackers during the campaign. It is possible to believe that Trump's campaign (or even Trump himself) broke federal laws during the campaign, and that Russian efforts to influence the outcome of the election largely came to naught.

If you're having trouble keeping it all straight, just do what Woolsey does. Take accusations of Russian influence very seriously, while laughing off any suggestion that America has done the same.