Students for Liberty's annual conference is THE event for people interested in "Peace, Love, Liberty." 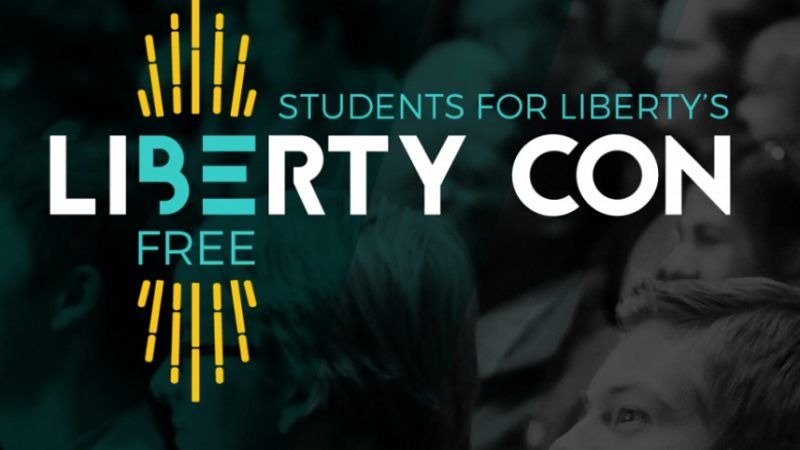 I'm thrilled to implore you to attend Students for Liberty's annual conference, LibertyCon, which is happening between March 2 and March 4 this year in Washington, D.C. I've been going to these shindigs pretty much since the first one and I can personally testify that few events in the libertarian movement have the same level of energy, intelligence, engagement, and excitement.

Go here to get information about who is speaking when and how much everything costs. College students and recent grads are especially welcome, but anybody interested in the future of "Free Minds and Free Markets" should attend.

And I'm happy to tell you that Reason folks will be all over the event, helping to celebrate our 50th anniversary. Among the Reason-centric panels:

Unsuck Your Video: Five Tips For Making Better Political Comedy
Meredith Bragg, Austin Bragg, Andrew Heaton
Meet some of the warped brains behind "Libertarian Game of Thrones," "Attack Ads 1800," "Mostly Weekly," and many of your favorite comedy Reason TV videos. These guys will cram decades worth of experience into 25 minutes of distilled wisdom. Free PowerPoint presentation included with every (free) purchase.

From Cocktails to Cannabis: How Prohibition Always Kills Your Buzz
Peter Suderman, Katherine Mangu-Ward
More than 80 years after Prohibition, the craft cocktail scene is booming. Is pot next? Come watch Reason.com Managing Editor Peter Suderman demonstrate how to make the classic cocktail known as "The Old Fashioned." Suderman and Reason Editor-in-Chief Katherine Mangu-Ward will discuss the long-tail effects of alcohol prohibition—and how legalized pot is finally coming into its own.

How To Talk About Freedom on TV
Katherine Mangu-Ward, National Review's and Fox News' Kat Timpf, The Federalist's and CNN's Mary Katharine Ham, and Young Voices' Liz Wolfe discuss how best to represent the radical ideas of libertarianism in ways that aren't just pure but are persuasive.

Facebook, Technology, and Freedom
Reason's Matt Welch leads a free-wheeling discussion on how social-media platforms such as Facebook and other disruptive new methods of getting your voice out there are putting a stake through the heart of legacy gatekeepers like CBS, The New York Times, and more.

Nick Gillespie Interviews Dave Rubin
The "Lou Reed of libertarianism" (hey, not my call!) talks with Dave Rubin, the former lefty member of The Young Turks about why he left the left behind and gained a massive YouTube audience by hosting civil, thoughtful, and in-depth conversations about every hot-button topic under the sun.

So register for SFL's LibertyCon now!

If that's not reason enough, chew on this: The whole show will be emceed by bitcoin-maximalist Naomi Brockwell and major speakers include the likes of Whole Foods co-founder and Conscious Capitalism co-author John Mackey, Overstock.com founder Patrick Byrne (whose Ph.D. dissertation was on Robert Nozick's night-watchman state), anarcho-capitalist legend David Friedman, "great enrichment" economic historian Deirdre McCloskey, ACLU President Susan Herman, and Guatemalan activist Gloria Alvarez. There will be knock-down, drag-out debates about immigration vs. nativism, capitalism vs. socialism, and bitcoin vs. gold. Dozens of panels about every possible topic you can think of.

Earlier today, I spoke with SFL's head, the political economist Wolf von Laer. Take a listen to that by clicking below or going here now.