Trump Says In SOTU That Administration Will Pursue Prison Reforms

"We will embark on reforming our prisons to help former inmates who have served their time get a second chance." 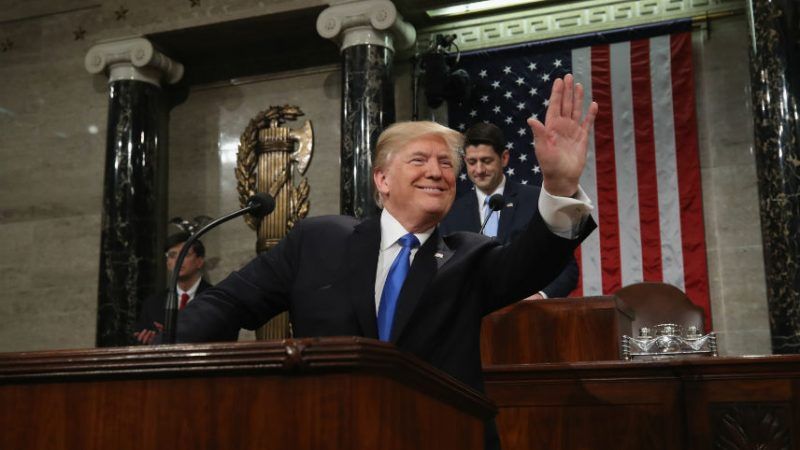 President Trump said his administration will pursue reforms to the federal prison system and its reentry programs as part of his 2018 State of the Union speech tonight.

"As America regains its strength, this opportunity must be extended to all citizens," Trump said. "That is why this year we will embark on reforming our prisons to help former inmates who have served their time get a second chance."

The comments are somewhat of a change in tone for Trump, who made tough-on-crime rhetoric a hallmark of his stump speeches as a presidential candidate in 2016. He decried Obama's clemency initiatives and referenced "American carnage" from out-of-control crime in his inauguration speech.

But Trump's son-in-law and White House adviser Jared Kushner has been meeting privately with conservative criminal justice reform advocates on a regular basis over the past years, as well as lawmakers on the powerful Senate Judiciary Committee. Kushner has made criminal justice reform, which has been stalled in Congress for the past several years despite what appeared to be growing momentum, one of several key priorities.

In January, the White House held a roundtable discussion on reforms to prisons and reentry programs for former inmates—much more palatable to conservatives, especially Attorney General Jeff Sessions, than changes to sentencing laws.

"We support our law enforcement partners, and we're working to reduce crime and put dangerous offenders behind bars," Trump said at the roundtable. "At the same time, we want to ensure that those who enter the justice system are able to contribute to their communities after they leave prison, which is one of many very difficult subjects we're discussing, having to do with our great country."

Mark Holden, the general counsel for Koch Industries and a prominent conservative advocate for criminal justice reform, said in a statement that Trump's comments State of The Union comments were "very encouraging and we look forward to continuing to work with the White House, the administration, members of Congress and states to make this vision a reality nationwide."

"We applaud the president for acknowledging the need to change our policies and expectations around prisons, which are failing to equip individuals to successfully return to society and succeed," Holden said. "Prisons should focus on rehabilitation, reformation, and redemption. Reducing crime starts with lowering recidivism and the best way to do that is to make sure that incarcerated individuals—over 95 percent of whom will one day be released—leave prison better than when they arrived."

Holden is also the chair of the advisory council for Safe Streets & Second Chances, a new $4 million initiative launched by Koch Industries and the Texas Public Policy Foundation last week. The initiative will work with 1,000 participants in four states— Florida, Louisiana, Texas, and Pennsylvania—to improve job opportunities and reentry back into society for former prisoners.

"We are incredibly pleased that President Trump took time this evening to recognize the importance of reforming our corrections policies," said Brooke Rollins, President and CEO of the Texas Public Policy Foundation. "History shows that it's not enough to simply lock people up and then release them with no plan for reentering their communities. We must build on the approach used in states to rehabilitate incarcerated individuals so that they're less likely to wind up back behind bars."

Pat Nolan, the director of the American Conservative Union Foundation's Center for Criminal Justice Reform, called Trump's comments "a milestone in the growing conservative movement to apply conservative principles to our justice system."

"Our reforms reflect our values of accountability for both offenders as well as government agencies, support for crime victims, treating each person with dignity and offering a second chance," Nolan said. "We have worked with President Trump and his staff on crafting these proposals that reflect these values."