Amazon Announces Shortlist for New HQ; Abandon Hope All Ye Who Live in These Cities

How the hell did Brogden, Pennsylvania, and Anderson, Virginia, not make the list? 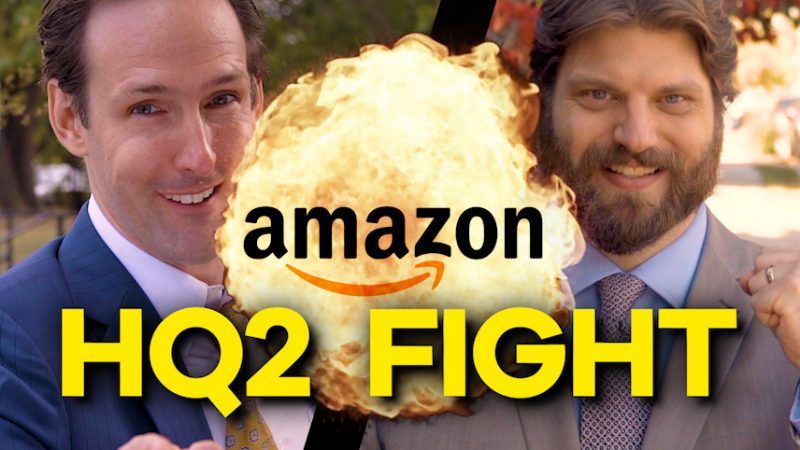 Amazon, the mega-site that controls more and more of our daily life by giving us stuff we want at low prices, has announced a shortlist of cities that it's considering as the location for its "HQ2," or second headquarters. The list includes the following cities, culled down to 20 from over 200:

A decision on the $5 billion project is expected by the end of the year. Be happy if your hometown is not on the list, which promises to be the century's biggest crony-capitalism deal. Without any inside information, I'd say Toronto and D.C. are the top two, simply because they are in the eastern time zone and seats of growth and power. Toronto is the coolest city in North America, simultaneously foreign but familiar. Both the provincial government and Canada's federal government will do whatever it takes to land it and, unlike a lot of the Rust Belt cities vying for the prize, they've got deep pockets. The Washington area is a region that's among the very wealthiest in the United States because, as all readers of The Hunger Games understand, the Capital District always brings home the bacon. Being on the opposite side of the continent from Seattle and within walking distance of legislators who control all sorts of tax codes and labor laws has got to very attractive, and that's even before local goverments bend frontwards and backwards to accommodate Amazon. Texas is a strong bet too, given that state's economic and population growth and relatively low cost of living.

All the finalist cities have been going bananas in offering the online giant all sorts of subsidies, tax breaks, and bribes. Dallas is saying the HQ2 would have bullet-train station, for instance, while the city of Newark and the state of New Jersey are promising a combined $7 billion in tax breaks. Southern California is talking a billion dollars in subsidies and Philly, home to long-suffering sports fans, really nasty people (love them all), and great food, is talking about 28 million square feet spread over several linked sites.

Which brings me to quite possibly the best Reason TV video of all time (IMAO). From the feverish minds of Austin Bragg and Andrew Heaton, here's "Desperate Mayors Compete for Amazon HQ2." This is life-changing.