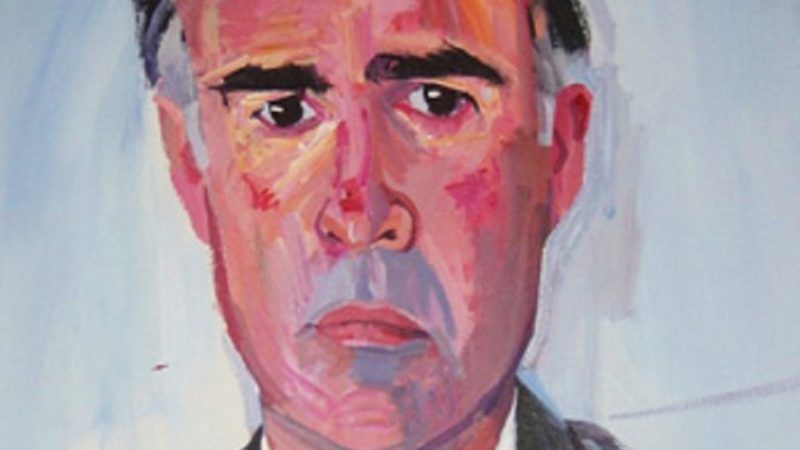 Let us now praise California's Gov. Jerry Brown, who is calling for reductions in gold-plated, unsustainable public-sector pensions in the nation's most-populous state.

Decades ago, Brown was mocked as "Governor Moonbeam" (by Mike Royko) and as a "Zen fascist" who would slaughter "un-cool" residents with "organic poison gas" (the Dead Kennedys). He was a hippie, get it, who slept on a futon, fooled around with rock-star sexpot Linda Ronstadt, and even signed off on a heterodox official portrait (see right). Horrors!

When he took office for the first time, Reason even had the temerity to praise Brown, who assumed office immediately after Ronald Reagan (who increased spending by a whopping 12.2 percent per year!), by writing in 1975:

Jerry Brown is moving in the right direction. He supports many statist measures, but he is still more libertarian than the average politician, and much more than any recent Governor of California. He is more fiscally conservative than many so-called conservative leaders, and yet is a good liberal on civil liberties questions. One thing that Brown has learned from politics that can be a lesson for everyone is his analysis of government: "Government isn't a religion. It shouldn't be treated as such. It's not God, it's humans, fallible people, feathering their nests most of the time." Let us hope that the people of California can learn something from the maverick Governor.

Man, 1975 was a loooong time ago, and suffice it to say that Brown didn't really deliver on libertarianism during his first stint as governor. Or in his second, either, where he has increased spending and became obsessed with a truly useless, criminally expensive high-speed rail project whose only contribution to humanity so far has been to inspire the second season of HBO's True Detective. His second term ends in a year and because of term limits, he can't run again. As he exits, Steve Greenhut noted last month in these pages, "Brown is taking on the public-sector unions he has spent his career empowering." Finally.

Since 1955, something called the "California Rule" has stood in the way of meaningful pension reform. The rule basically holds that public-sector employees at all levels of government had an inviolable right to the pension benefits that existed on the day they were hired. For decades, California's politicians bought votes by promising ever-better and ever-greater pension benefits that would kick in down the road after they were safely out of office, eventually creating a system that only has "68 percent of assets needed to cover its liabilities. For the fiscal year beginning in July, the state's contribution to Calpers [the nation's largest public-sector pension] is double what it was in fiscal 2009."

Absent the ability to alter pensions, states and localities have to devote more and more of their taxes to simply covering the costs of retired workers. Worse still, they often raise taxes to cover rising costs, typically at the expense of providing basic services such as police and road maintenance. In California and over a dozen other states, courts have ruled that pensions and future benefits such as health care can't be touched, forcing taxpayers alone to shoulder the burden. (The city of Bell, California is a microcosm of where this madness leads.)

But that may well change, as much out of fiscal necessity as anything else. In the Golden State, three court cases are unfolding that strike at the heart of the "California Rule." Depending on how they are resolved, the cases may give the state and local governments the right to change payouts during economic downturns as long as the lowered benefits are still considered "reasonable."

Brown said he has a "hunch" the courts would "modify" the so-called California rule, which holds that benefits promised to public employees can't be rolled back. The state's Supreme Court is set to hear a case in which lower courts ruled that reductions to pensions are permissible if the payments remain "reasonable" for workers.

"There is more flexibility than there is currently assumed by those who discuss the California rule," Brown said during a briefing on the budget in Sacramento. He said that in the next recession, the governor "will have the option of considering pension cutbacks for the first time."…

"In the next downturn, when things look pretty dire, that would be one of the items on the chopping block," Brown said.

It's more than a little crazy to be hoping for a downturn so that a state can reset public-sector pensions that threaten its fiscal future. It shouldn't have to come to that and it doesn't have to. Changing from defined-benefit plans to defined-contribution plans will solve much of the problem in a way that won't put pensioners out on the street or punish taxpayers with higher taxes and lower services (go here for a sensible public-sector pension reform plan, put together by analysts at Reason Foundation's research policy).

But until more governors follow Moonbeam's example, more legislatures change their practices, and more courts rule against all the various forms of the "California Rule," things will remain dire.