Trump's 2020 Odds, and the Libertarian Party's

Win or lose, libertarians will remind Americans about basic principles we have in common. 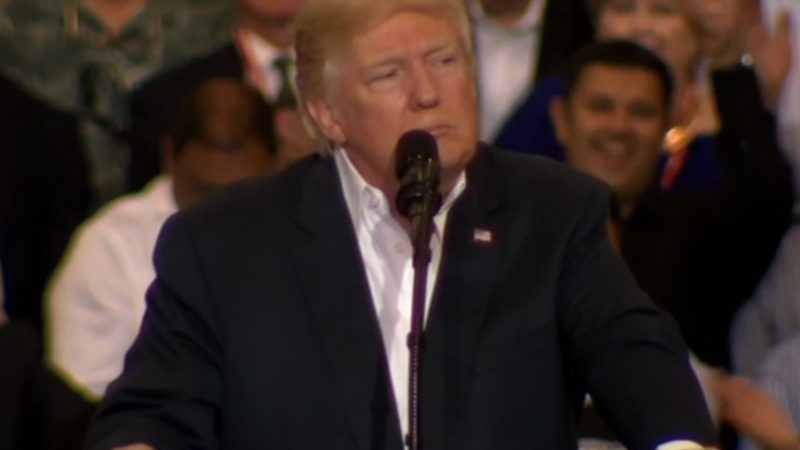 President Trump is up 3 percent!

I refer to the betting odds. Gamblers (mostly in Europe because political bets are legal there) now give the president a 53 percent chance of finishing his first term.

That's it—they barely think he'll complete four years. This must seem wrong to Trump supporters, but when Trump won the presidency, the odds were significantly lower—many people thought he wouldn't finish one term.

I live in New York City, so I heard (and hear) all that and more.

Still, I thought the people saying he'd be gone in less than four years were wrong. So, I took bets from friends. So far, it looks like I'm winning.

You can follow the odds at ElectionBettingOdds.com, a site created by my associate Maxim Lott. He doesn't create the numbers—just translates the bets into odds Americans can understand.

I know you Trump fans mock the betting odds. I read your comments on Facebook and Twitter: "Stossel the Fool, your website got Trump's election wrong! Why trust your site now?"

Here's why: Betting odds are more reliable predictors of future events than polls, pundits and everything else.

True, before Trump won, gamblers gave him only a 20 percent chance. But 20 percent isn't nothing, and by election night ElectionBettingOdds.com recognized the truth faster than the TV commentators did.

As I write, the bettors predict that in this year's congressional elections, Republicans will hold the Senate but lose the House.

In 2020, who will be elected president? Trump leads, but oddsmakers give him just a 29 percent chance.

Yes, it's too early to predict this November's results, let alone 2020's. But watching the odds change is fun (they update every five minutes), and gamblers are the best guide.

Of course, I want a libertarian to win.

For my YouTube video this week, I asked Libertarian Party chairman Nick Sarwark, "Why bother competing? Last election, even though so many people hated both the Democrat and Republican, Libertarian candidate Gary Johnson got less than 4 percent of the vote."

"We tripled all previous records," he replied. "In the 45-year history of the Libertarian Party, we've never had that kind of support."

Not good enough, I said.

"Success is a long-term thing," Sarwark assured me. "More people are seeing that when you elect Republicans you don't get the sort of small government they run on. If you elect Democrats, you don't get civil liberties… Both parties are fighting over the ability to take your tax money and give it to their corporate special interest friends."

Some Libertarians claim the party would have done better in 2016 had Gary Johnson been a better candidate. Some complained, "He's too low-key. He sounded like he was stoned."

"No one has the perfect combination of credibility, experience, purity of message," replied Sarwalk. "He was the best candidate the delegates could have picked. And we had the best success that we've ever had."

Win or lose, he added, Libertarians will remind Americans about basic principles we have in common: "The rights of the individual, the right to free speech, to keep and bear arms, limitations on the powers of government. We want a right to live our life and pursue happiness any way we choose—as long as we don't hurt other people and don't take their stuff. And the two old political parties, that's not what they're about. They're about taking power and controlling you."