'My Thoughts Are Murder to the State'

Lester Hunt | From the January 2018 issue 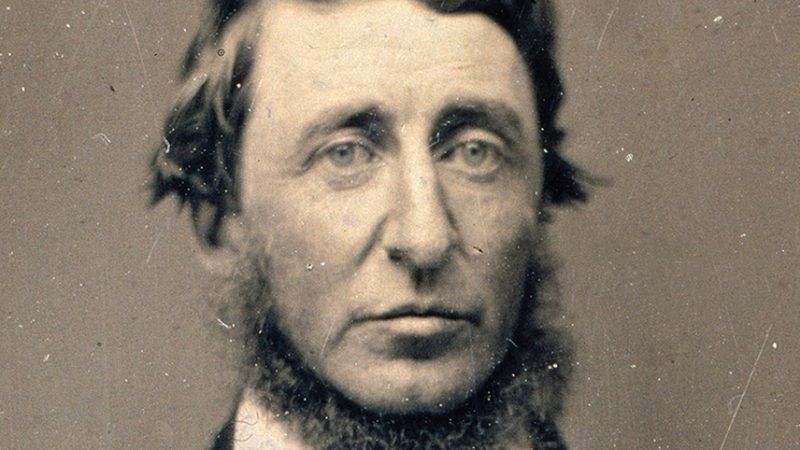 My first encounter with Henry David Thoreau was in high school English class. I was charmed, but also puzzled, by his experiment of living alone in the woods so he could "drive life into a corner" and by his gift for pithy statements that forced me to do a mental double take. Some of them, I realized after a little reflection, Thoreau believed are literally true—such as "The swiftest traveller is he that goes afoot" or "Only the defeated and deserters go to the wars, cowards that run away and enlist." Others I found more difficult to grasp: "It is a ridiculous demand which England and America make, that you shall speak so that they can understand you." Or worse yet: "For the most part, we are not where we are, but in a false position." I looked forward to the next class, hoping to have some of these mysterious declarations clarified.

When the time came for discussion, I was amazed that all the other students who spoke up were sure they knew what Thoreau was up to—and they didn't like it one bit. Even the teacher was hostile to his work. Some of my classmates seemed actually angry at Thoreau. They appeared to think he wanted to be alone because he did not like people, and they felt personally rejected.

Over the years, I've learned that the I-hate-you-right-back branch of Thoreau criticism is by no means limited to adolescent readers. A recent New Yorker essay about the man was headlined "Pond Scum." The title referred to Thoreau himself.

This persistent thread helps account for one of the most salient and also oddest features of Laura Dassow Walls' Henry David Thoreau: A Life—its defensiveness. Walls is eager to emphasize what she likes in her subject. Things she finds negative generally get the soft pedal. She seems convinced, more than I am, even, that he needs it.

This is not entirely a bad thing. Walls succeeds in burying the "misanthropic hermit" interpretation of Thoreau under a mountain of facts. He was, on her showing, a devoted son and brother, a steadfast friend for whom human relationships were profoundly important, an active and passionately committed member of a political movement (abolitionism), and an effective and engaged businessman. Walls' Thoreau would no more try to secede from humanity than he would chop off part of his body. I hope that, having been interred by Walls, the misanthropy interpretation will not soon dig itself out again.

Walls also excels in her account of Thoreau's relation to the science of his day. One thing that makes Thoreau attractive to a lot of people is that he combines a point of view that could be called mystical—in the sense of seeking a direct, personal experience of the sacred—with a thoroughly rational approach to the world.

Walls notes that he was one of the very first people in the Western Hemisphere to read Darwin's Origin of Species. Unlike his biologist friend Louis Agassiz, he found its argument convincing. As Walls sees it, the lesson Thoreau drew from Darwin was that all life stems from one family tree, which means that not only all human beings but all living things are our relatives.

She also makes a welcome contribution to the literature on Thoreau with her thorough treatment of his relations with Native Americans of various tribes. She shows that his interest in American Indians was deeper, more persistent, and also more sympathetic than many of his readers realize: He lost no opportunity to grill natives he knew or chanced to meet with questions about culture, wood lore, and language, eventually accumulating over 3,000 pages of notes. Little of this material found its way into his published works, possibly because tuberculosis struck him down before he could put it to use.

Walls fails, alas, in her account of Thoreau's politics.

She points out that he begins his great essay "Civil Disobedience" by endorsing not just the motto "That government is best which governs least" but also its more radical cousin "That government is best which governs not at all." Thus, as she notes, he aligns himself with such anarchist friends and fellow travelers as Bronson Alcott, Charles Lane, and William Lloyd Garrison.

But Walls then claims that, in "a startling turn," Thoreau "rejects their rejection of government." The sentence where she says he does this is this one: "But, to speak practically and as a citizen, unlike those who call themselves no-government men, I ask for, not at once no government, but at once a better government." This, as she reads it, is self-contradictory: He both endorses and denies his friends' anarchism.

But there is a more coherent way of reading these statements. What separated Thoreau from the no-government men was not theoretical content but momentary point of view. Speaking "practically," in terms of what could be brought about "at once," he wanted a government less evil than the slave-catching, Mexican-killing one he saw around him. But as to what is not merely better but the best, the essay's conclusion makes it clear that he was still with his friends. Sketching the progress from absolute monarchy to limited monarchy to democracy, his final paragraph then imagines a state that allows individuals to drop out of its rule entirely. This, he declares, would "prepare the way for a still more perfect and glorious state which also I have imagined, but not yet anywhere seen."

In context, Thoreau seems to be imagining the state of no-state—as he said at the beginning of the essay, "when men are prepared for it, that will be the kind of government which they will have."

Walls seems eager to reduce "Civil Disobedience" to liberal platitudes, even claiming that it "suggests" a range of possible responses to unjust state action, so that there is no general duty to do something as hazardous as withdrawing one's support from an unjust government. I can find no basis in the text for this interpretation at all. Thoreau explicitly considers the objection that denying the government's authority when it presents its tax bill means the state will "soon take and waste all my property." His response: To be wealthy in a corrupt system is not an honor but a disgrace.

"This is hard," he says. Yes, indeed. The real Thoreau is not always easy to take, nor is he supposed to be. Like Nietzsche, he writes with a poke-the-bear style that is meant to be unsettling. It is connected with the feature of his style that struck me when I was a teenager: his tendency to speak in paradoxes and riddles. He does not always want people immediately to agree with him. Some of the persistent hostility he has faced was deliberately provoked.

Walls' approach to Thoreau unfortunately tends to conceal the shocking, contrarian side of his thought. In her efforts to make the writer accessible to liberals like herself—to showcase his anti-imperialism, anti-racism, and anti-sexism while glossing over his anti-statism and other elements that might rub some modern readers the wrong way—she grinds off some pointy portions of a famously prickly author's personal style.

The result is a smooth and comfortable Thoreau, but not the full Thoreau. We need to hear more about the man who declared, "My thoughts are murder to the state"; who said that he does not think a man is good just because he feeds the hungry; who even claimed once that he sympathized more with the wind and the waves than with the drowned bodies of the victims of a Cape Cod shipwreck. A nonthreatening Thoreau is a Thoreau missing something essential: his power to stir you up, to challenge you to grasp new ways of thought, to grow.

Lester Hunt is professor emeritus of philosophy at the University of Wisconsin-Madison. His most recent book, co-authored with David DeGrazia, is Debating Gun Control (Oxford).