Why Cards Against Humanity Won't Stop the Border Wall 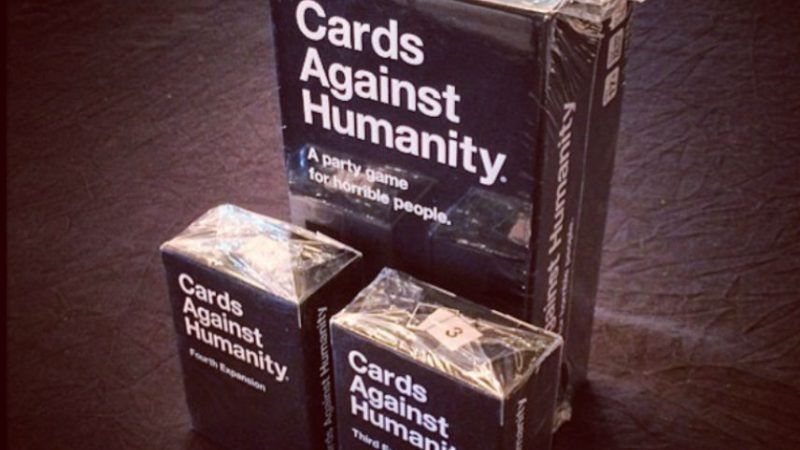 What did you bring back from Mexico? There are no wrong answers, but "a zesty breakfast burrito," "an endless stream of diarrhea" or "a cooler full of organs" might help you win a round of Cards Against Humanity. It's a game where each player puts down a black card with a question—and the other players toss in a white card with the funniest or crudest answer. It's best played while downing tequila shooters.

It's not my cup of tea (or shot of reposado), but the makers of the game also are known for making edgy political points. Last year, a super PAC formed by the company's creators rented a billboard near Chicago that asks this question: "If Trump is so rich, how come he didn't buy this billboard?"

More recently, the company announced that it bought some land on the U.S.-Mexican frontier to help stop the border wall by making "it as time-consuming and expensive as possible for the wall to get built." The goal is to tie up land acquisitions in legal proceedings. It's a clever idea but couldn't possibly work for several reasons.

For starters, the federal government has nearly endless taxpayer-provided resources that will surely crush any effort funded by a company that sells games. A U.S.-Mexican border wall—no matter how wasteful and offensive—clearly is a legitimate use of the power of eminent domain. Eminent domain is the process by which the government takes property for a "public use" even if the property owner has no interest in selling it.

The U.S. Constitution is clear. Under the Fifth Amendment, no person shall "be deprived of life, liberty, or property, without due process of law; nor shall private property be taken for public use, without just compensation." In other words, the government can take private property provided it's for a "public use" and the owner has due process and is paid "just compensation."

Governments will always push the envelope to expand their power. Over the years, agencies have argued that eminent domain can be used not just for an obvious public project (i.e., a government-owned highway, courthouse or flood channel), but for a "public benefit."

In the 2005 Kelo v. City of New London decision, the U.S. Supreme Court upheld the idea that government can take private property and give it to private developers as long as the new development boosts tax revenues or provides some other benefit to the general public. As someone who covered eminent-domain takings, I saw firsthand the dangers this interpretation has created.

Cities tried to bulldoze houses and businesses to make way for shopping centers as they sought to maximize their tax base. An auto mall or big-box store will always pay more taxes than a private homeowner or small business, so Kelo means that your property rights always are in danger of the next government planning scheme.

"Any property may now be taken for the benefit of another private party, but the fallout from this decision will not be random," wrote Justice Sandra Day O'Connor, in a stinging dissent to the 5-4 decision. "The beneficiaries are likely to be those citizens with disproportionate influence and power in the political process, including large corporations and development firms."

Fortunately, the high court encouraged states to reform the eminent-domain process. Unfortunately, California's reform did little to pare back the abuses. Note that the political Left has been most zealous in protecting the power of government to take what it wants.

The first time Donald Trump made it onto my radar was in the 1990s, when he tried to acquire a modest house near his Atlantic City, N.J., casino. The old lady who resisted, Vera Coking, has become a property rights folk hero in the ensuing battle.

Bob Guccione offered Coking $1 million for the property in the 1980s to build a casino, but when she said no he started building the project around her, according to news reports. It went bust and Trump took over the project. He, too, tried to woo her to sell out so he could build a limousine parking lot. No problem. Everyone is free to make an offer.

But in 1994 "the casino authority made her an offer she couldn't refuse: They would give her $251,250 for her house," explained Matt Labash in the Weekly Standard. "And if she didn't accept within 30 days, they'd take her to court to snatch her land through eminent domain." Trump backed the authority's efforts, publicly supported Kelo and disparaged Coking in recent years.

Why won't "Cards" stop the wall? Here's the white card: Because the courts will say the wall is a public use. And the company is going up against a man who loves eminent domain. The company's gambit is a noble idea, even if the answers are far less entertaining than the ones about burritos and diarrhea.