Conservative apologia for Roy Moore and hostility toward his opponent are anchored on an issue individual senators are highly unlikely to impact. 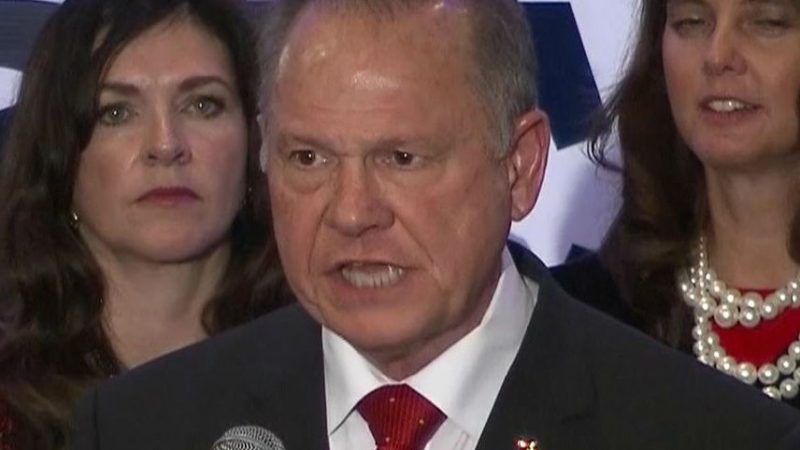 Sen. Ben Sasse (R-Nebraska), the telegenic bestselling author and near-Millennial darling of the Trump-averse conservative crowd, is no fan of accused sexual-abuser-of-minors Roy Moore. "This is a bad decision and very sad day," Sasse tweeted Wednesday, in response to news that the Republican National Committee had reversed itself and decided to send money to Moore's troubled Senate campaign. "I believe the women–and RNC previously did too. What's changed? Or is the party just indifferent?" Later that day, Sasse threatened: "If the political committee that I'm a part of (the [National Republican Senate Committee]) decides to contribute here, I will no longer be a donor to or fund-raiser for it."

Yet after the similarly-sentimented Sen. Jeff Flake (R-Arizona) tweeted this…

…Sasse shot back: "This donation is a bad idea. It's possible to be against BOTH partial birth abortion AND child molestation. Happily, most Americans are."

Does Democratic Senate challenger Doug Jones really support "partial birth abortion"? No, he does not. The basis of that claim is the following exchange Jones had with Chuck Todd in September on Meet the Press Daily:

"So you wouldn't be in favor of legislation that said, ban abortion after 20 weeks or something like that?" Todd asked.

"I'm not in favor of anything that is going to infringe on a woman's right and her freedom to choose. That's just the position that I've had for many years. It's a position I continue to have[.]"

In the hands of pro-Moore super PACs, this boundless answer to a limited question was translated into "Jones supports abortion in even the most extreme circumstances, including gruesome late-term and partial-birth abortions that are banned in countries across the world." In an attempt to quell the controversy, Jones gave an interview with AL.com clarifying his position. Relevant portions:

[Jones] said he supports Alabama's abortion laws as they are, saying that people are "fairly comfortable" with the current law. […]

["]the law for decades has been that late-term procedures are generally restricted except in the case of medical necessity. That's what I support. I don't see any changes in that.["] […]

Jones said his position would be to leave abortion laws unchanged.

"I think people are fairly comfortable with where the law has been for decades and that is that a woman has that right to choose because it is intensely personal and I don't think me or Roy Moore or the state of Alabama or the United States government should take that right away," Jones said.

Supporting current law means opposing partial-birth abortion, since intact dilation and extraction (the medical term for the procedure) has been illegal in the United States since the Partial Birth Abortion Ban Act was enacted in 2003. Still, anti-abortion activists know a morally unfit extremist when they see one. "No reasonable person," Alexandra Desanctis concluded in National Review three weeks after the clarification interview, "could consider Jones anything other than a zealot in this area."

In 2016, my colleague Elizabeth Nolan Brown wrote a piece titled, "Late-Term Abortions Are Rare and 'Partial Birth Abortions' Illegal. Why Do They Keep Dominating the Reproductive-Rights Debate?," and I think we have at least one possible answer to the question: because framing the issue in the most graphically awful terms makes for a galvanizing politics. But as Republicans prepare to line up behind a lawless jurist and culture-war troll who collectively demonizes entire populations while obviously lying about his reported habit of trawling shopping malls and high schools for love interest in his 30s, it's worth pondering whether some pro-life activists have single-issued themselves into a dark corner, and whether two-party polarization is herding us toward all kinds of similar moral compromises.

Over at The Federalist, in a much-derided piece titled "Why Alabamians Should Vote For Roy Moore," Ouachita Baptist University associate professor of philosophy and self-proclaimed "superhero against the dark forces of political correctness" Tully Borland recently argued (while avoiding any reference to Jones's follow-up interview) that the candidate's abortion policy made him a "moral monster." Excerpt:

Jones has gone on record that not only does he support abortion, but he supports unrestricted abortion, even opposing a ban on abortion after 20 weeks. This is morally equivalent to supporting infanticide. So either Jones knows exactly what he's doing in supporting killing babies in utero but doesn't care, in which case he's a moral monster, or his moral compass is in such need of calibration that one should never trust his judgment in moral matters. Politics, of course, is inextricably bound with such matters.

In my mind, Jones' position is so extreme that a vote for him is a vote for the greater of two evils by a wide margin. It's hard to imagine much worse than the mass murder of innocents. […]

Why are no Republicans or Democrats calling for Jones to step aside if not for the fact that they are really not that serious about the immorality of supporting infanticide in the womb? If Moore should step aside, so should Jones.

But such horror-inflation isn't even required when all abortion is murder:

Supporting someone who is okay with killing kids, just not molesting kids. https://t.co/zInLo3rm3b

I don't doubt the convictions of people who believe this, but I also shudder at the moral compromises it all but demands. What Republican misdeed can't be justified when stacked against mass murder?

Then there's the more pragmatic or transactional view, espoused recently by Pat Buchanan, that the "Alabama Senate race could determine whether Roe v. Wade is overturned. The lives of millions of unborn may be at stake." The math on that may be peculiar—it seems implausible that one vote out of 100 is going to tip the scales on a vote for a Supreme Court justice, let alone that said Supreme Court justice is going to show a willingness to overturn a 45-year-old precedent that, however curiously reasoned, reflects the basic political/cultural settlement of the body politic. But Buchanan's argument has been persuasive. "If Republican Roy Moore survives allegations of sexual misconduct (several involving minors) and beats Democrat Doug Jones in Alabama's Senate election Dec. 12," Ramapo College Associate Professor Stacie Taranto recently concluded in the Washington Post, "evangelical single-issue abortion voters will likely deliver the victory."

To which the pro-life National Review writer David French has an apposite reality-check:

Many Americans believe that reversing Roe would ban abortion. This is wrong. The Court could vote to overturn Roe, and abortion would still be legal across the length and breadth of the United States. After all, overturning Roe would return the abortion question to the political process, where different states would enact different laws. For example, only four states have passed post-Roe statutes indicating that they'd ban abortion if Roe is overturned. (A number of other states have pre-Roe abortion bans, but several are in blue states that would immediately protect abortion rights in the event of an adverse SCOTUS ruling.)

Thus, the fight for life transcends Roe. Decisive cultural change can diminish abortion dramatically even if Roe remains intact….Given this reality, "child-abusing senators against Roe" strikes me as perhaps the worst possible message to a culture in desperate need of persuasion.

Furthering that concern, Gracy Olmstead argued provocatively this week in The American Conservative that "Electing Roy Moore Will Be the Doom of the Pro-Life Movement." Excerpt:

From a political perspective, as Georgi Boorman recently pointed out, voting for loathsome politicians will distance swing voters from the GOP—and, more importantly, from the pro-life cause most often associated with it.

"Independent voters hate hypocrisy a lot more than they hate abortion," Boorman writes….Roy Moore may win Alabama, but his unpopularity (as well as the widespread disapproval of Donald Trump) could result in a momentous swing to the left in future months and years, thus erasing any possibility of congressional victory for the pro-life cause. […]

How can pro-lifers say they care more about women and their welfare when they vote for child molesters and sexual harassers? […]

What happens when the faces of the pro-life movement are hypocritical congressmen, sexual harassers, and men who brag about grabbing women's bodies without permission? […]

The politicization of the religious right has led to a dangerous cultural blindness, in which Christian conservatives often ignore societal and even moral warning signs in order to make tiny political gains. Many seem completely oblivious to the long-term ramifications of their actions. Unless and until pro-lifers realize their battle is first and foremost a cultural one, they will turn the entire nation against their cause —and likely lead to its doom, for at least the next few generations.