The Secret Meaning of Thanksgiving Dinner

Food historian Rachel Laudan explains why we eat what we eat on "turkey day" - and it has nothing to do with the Pilgrims. 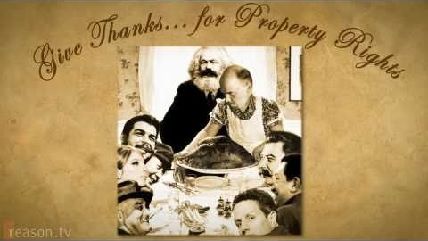 Did you ever wonder why we eat turkey, of all things, on Thanksgiving? After all, the Pilgrims didn't. They were more into duck, goose, and shellfish.

Last year, when the Reason Podcast (subscribe!) was just getting started, I interviewed Rachel Laudan, best known for the incredible book Cuisine and Empire, a fascinating history of how food and cooking have not simply shaped world events but been at the very center of them.

Laudan, a visiting scholar at the University of Texas, explained that America's national meal, which only really became a thing hundreds of years after the Pilgrims suffered through their early winters, has always functioned as a way of rebuking haughty elites from England and Europe. Laudan is a real firecracker in conversation—when I asked the world-traveling cosmopolitan if there was any food she wouldn't eat, she didn't miss a beat before saying anything organic.

Listen below or here for her compelling, libertarian case against supposedly sustainable farming. It's a great conversation about food, cuisine, etiquette, and so much more. Bring her figuratively to your table—she's the ultimate dinner guest!

When Thanksgiving became a national holiday back in 1863, it was a repudiation of the French aristocracy, says food historian Rachel Laudan. Europe's haute cuisine, contemporaries believed, "ruined the individual, the household, and the nation." Thus, this "simple meal…became a national celebration embracing all citizens," Laudan wrote in a 2013 Boston Globeessay.

Contemporary novelist and cookbook author Sarah Josepha Hale designed the standard Thanksgiving meal as an affirmation of our (small 'r') republican virtues. Turkey was cheap to procure, pumpkin pie was easy to make, and cranberry sauce was a simple take on the fancy toppings typical in a French court.

The meaning of Thanksgiving has changed over the years—thanks in part to Julia Child's successful effort to democratize French cuisine—but even today, "nobody suggests adding truffles to your turkey," Laudan says.

Nick Gillespie interviewed Laudan about the meaning of Thanksgiving, why she is not a fan of "organic" food, and other aspects of culinary history, drawing on her fascinating 2013 book, Cuisine & Empire.

The Reason Podcast is currently killing it at iTunes, where we ranked as the 160th most-popular News & Politics podcast.

Take a listen to our latest episodes—an exclusive interview with FCC head Ajit Pai, who explains why repealing Net Neutrality rules is a big win for free expression and the future of the Internet; a raucous tour of the news with Katherine Mangu-Ward, Peter Suderman, Matt Welch, and me; Shikha Dalmia explaining how crackdowns on illegal immigrants snag innocent American citizens; and a debate between Mangu-Ward and me and the editors of the hard-left Jacobin mag—and subscribe if you like what you hear!