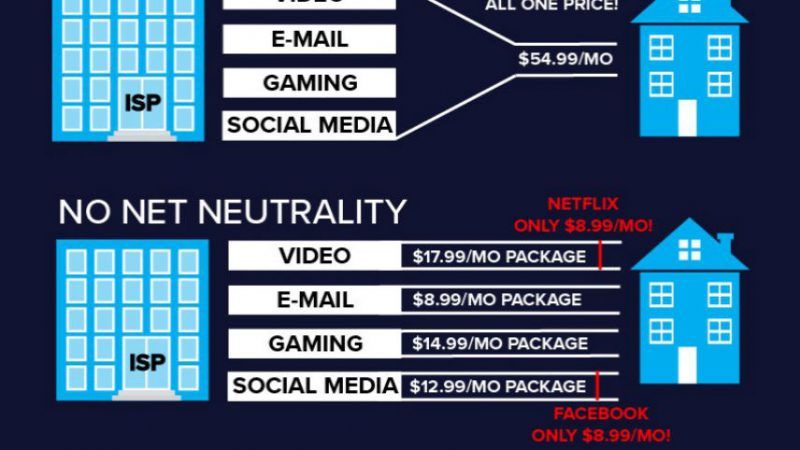 When I first saw this graphic cross my Facebook feed, I thought it was created to oppose net neutrality:

When I realized it was supposed to be from Rep. Ro Khanna (D-Calif.), a prominent advocate of net neutrality, I thought maybe it was a clever hoax. But no, he tweeted that gem out yesterday.

In the upper portion of the graphic, bundled internet appears for $54.99. In the lower, post–net neutrality world, internet service is divided into specific uses one can opt in or out of. The total price is $54.96. Khanna's graphic even appears to depict an option where that price could be even lower, if you use only one streaming service or social media network.

That this is shared as an argument for net neutrality boggles the mind. Many Americans don't use the internet for video, email, gaming, and social media. They could see serious savings if internet access were sold piecemeal like this.

Regardless, the entire graphic is a fantasy. The kinds of additional consumer choices a net neutrality–free market might offer are thwarted by other government regulations and government-enforced monopolies

But we don't have to imagine what a world without "net neutrality" regulations look like. You just have to remember what 2014 was like.

The concept of net neutrality is often poorly understood. The "open internet order" promulgated by then-President Barack Obama was not based on the same principles laid out by law professor Tim Wu, who coined the term network neutrality. For Wu, it was obvious that "a total ban on network discrimination…would be counterproductive," but that's what the Federal Communications Commission (FCC) did in 2015, as Andrea O'Sullivan pointed out in Reason. It's impossible to say exactly what kind of innovations such rules are thwarting, because they're being thwarted.

"Under my proposal," commission chair Ajit Pai noted yesterday, "the FCC would simply require Internet service providers to be transparent about their practices so that consumers can buy the service plan that's best for them and entrepreneurs and other small businesses can have the technical information they need to innovate." Sounds like a good start.