When the punk rock thought police ruled the scene

Damon Root | From the December 2017 issue 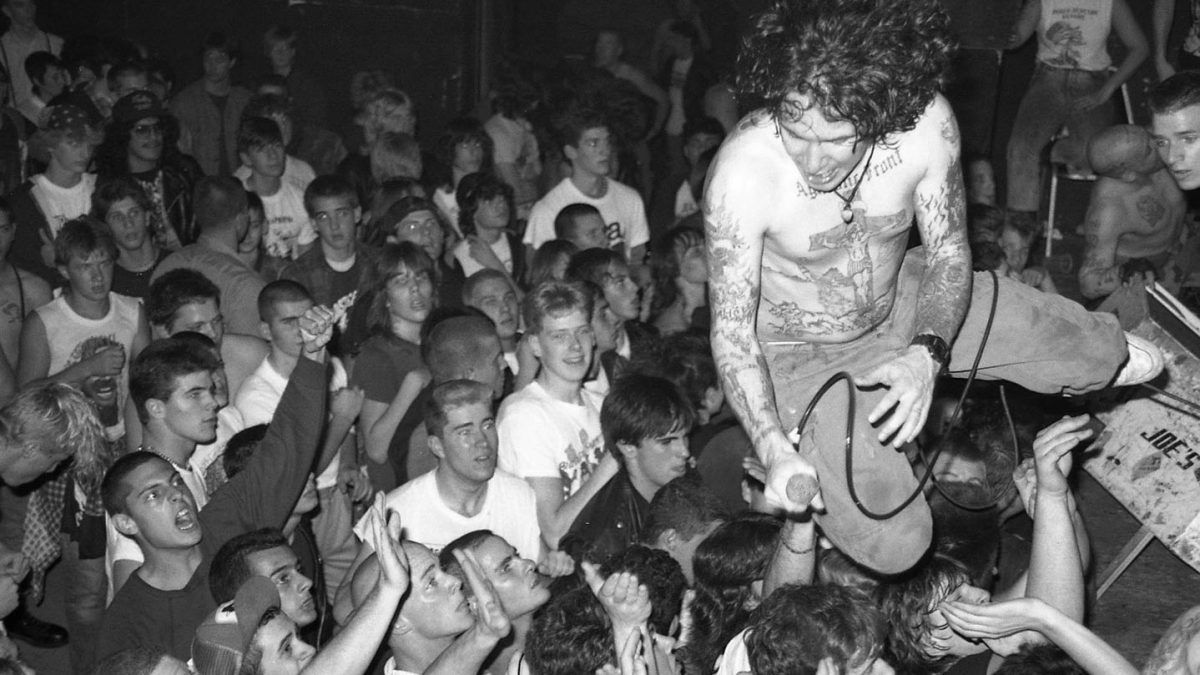 "I'm approaching this band with caution," it warned. "Unfortunately, much of the narrow-mindedness, fanatical nationalism, and violence that has destroyed the New York punk scene seems to have revolved around AGNOSTIC FRONT."

The author of that review was the publication's founder and editor, Tim Yohannan, a 40-something ex-Yippie who thought punk music should march in lockstep with left-wing politics. As Ray Farrell, a punk veteran who once worked at the independent record label SST (run by Black Flag guitarist Greg Ginn), told Steven Blush, author of American Hardcore: A Tribal History, "there was an ideological development at Maximum RockNRoll, making everything move towards a Socialist bent."

In effect, Yohannan appointed himself as the grand inquisitor of the punk rock thought police, scouring the scene for any signs of deviation from the lefty script. "If it's just 'good sounding' music you want," he admonished readers in the March 1985 issue, "then punk is no alternative at all. For me, what makes punk different is the intelligence and commitment behind it."

Agnostic Front quickly became one of Yohannan's primary targets. In one 1984 column, he claimed "the N.Y. Skins apparently have embraced the British National Front's racist and nationalist attitudes." He rarely missed the opportunity to depict the band's members and their friends as goose-stepping goons.

This August, Agnostic Front singer Roger Miret published a new memoir that tells his side of the story.

"A writer for this crappy but influential fanzine, Maximumrocknroll, started talking shit about us and calling us a bunch of fascist skinheads," Miret writes in My Riot: Agnostic Front, Grits, Guts & Glory (co-authored with journalist Jon Wiederhorn). "The crazy thing about Timmy calling me a fascist is that I was an immigrant Latino kid dating a Jewish girl, and she never accused me of being a Nazi sympathizer."

But because his band had the nerve to occasionally dissent from left-wing tenets, it drew the ire of the powers in punk at the time. Nor was Agnostic Front the only band to run afoul of Yohannan's insistence on ideological purity.

Born in Cuba in 1964, Miret came to the U.S. as a young child after his parents fled the Castro regime. He grew up rough in "the slums of New Jersey towns like Passaic and Paterson." From there he found his way to Manhattan, where the loud, fast sounds of bands such as the Stimulators, Reagan Youth, and Even Worse were blaring out of clubs such as Max's Kansas City, A7, and CBGB.

Miret's life changed forever when he saw the Bad Brains play in 1981. It was an "inspiring" and "absolutely mind-blowing" experience, he writes. "They played faster than anyone and still sounded tight and furious."

The aggressive music attracted a wild crowd. John Joseph, the singer for NYC legends the Cro-Mags, once remembered that "at a Black Flag show I was sent flying across the dance floor by none other than the late John Belushi, who was a huge punk/hardcore fan and was at a lot of the early shows." As Joseph explained in his memoir, The Evolution of a Cro-Magnon, Belushi "was a big dude and when he slammed his way across the dance floor you'd just see bodies going airborne."

Miret slammed his way around the scene for a couple of years before joining Agnostic Front in 1983. "Some people think we were all lowlifes who wanted to kick the shit out of each other. That couldn't be further from the truth," he writes in My Riot. "We hung out together and supported each other. The more popular bands helped get gigs for groups that were less known, and some helped other bands put out their own records."

Agnostic Front has "never put down any other races or ethnicities," Miret insists. "From the start we welcomed anyone who wanted to be a part of what we were doing. I was Cuban for Christ's sake—far from the image of the blond-haired, blue-eyed Aryan Übermensch."

Unlike some punk acts, Agnostic Front didn't offer any sort of coherent political message. But the band did sometimes express right-of-center views in songs and interviews. The 1986 track "Public Assistance," for example, was a harsh attack on the welfare state. Sample lyric: "Uncle Sam takes half my pay so you can live for free."

Miret didn't write those lyrics. He outsourced the job to Peter Steele, the leader of the Brooklyn metal act Carnivore, who would later go on to fame as the frontman for goth-rockers Type O Negative. But Miret stands firmly behind the sentiment. "I was a minority kid whose mom was on welfare and I saw all the time how other people in our neighborhood abused the system," he writes in My Riot. "Public assistance was designed to help people better their lives and move on, not to enable the families that used it. Those are the people the song was aimed at."

Miret and his bandmates also voiced support for President Ronald Reagan's foreign policy. "We have to stop Communist aggression," guitarist Vinnie Stigma told the zine Guillotine in 1984. "I think [Reagan] has guts," Miret later added. Statements like that ruffled a few mohawks.

Miret has nothing but contempt for those "privileged, politically correct" punks that slandered his name. Did Agnostic Front sometimes promote conservative opinions? Yes. But were they fascists? Nazis? Not unless those terms are drained of all meaning and used to smear any right-of-center point of view.

"To say Agnostic Front were a bunch of Nazis in a skinhead gang was ridiculous," Youth of Today guitarist John Porcelly once told the journalist Tony Rettman. "I was there, and no one united NYHC [a moniker for the New York hardcore scene] like Roger Miret. I used to tell Tim Yohannan what great guys [Agnostic Front] were. He would never believe me."

The freakout over Agnostic Front's politically incorrect punk came to a head when Miret, Stigma, and bassist Rob Kabula agreed to be interviewed for Maximum Rocknroll's January 1985 issue by punker Dave Scott.

Scott sent his questions by mail and the band sent back their answers. But Yohannan thought the interview was too friendly, so he mailed a batch of his own questions, focusing on the "disturbing aspects to these nice guys' philosophies" and "their admittedly nationalistic outlook." Miret, Stigma, and Kabula replied again.

Yohannan then edited the whole correspondence together, littering the Q&A with a final round of his own commentary. He literally gave himself the last word on his most contentious exchanges with the band.

It was an ugly and heavy-handed piece of work. Yohannan had revealed his own intellectual insecurities by doing everything in his power to stack the deck in his favor. He clearly did not trust his subscribers to read the original interviews and then make up their own minds. Even left-wing punks were embarrassed by the performance.

Regrettably, echoes of Yohannan's approach can still be heard today. When Rettman's great oral history, NYHC: New York Hardcore 1980–1990, was published in 2014, New Yorker critic Kelefa Sanneh took a cheap shot at Agnostic Front that came straight out of the Maximum Rocknroll playbook. "Agnostic Front all but dared listeners to assume the worst, and Yohannan wasn't the only one who did," Sanneh wrote. "Agnostic Front shows attracted a certain number of white-power partisans, and the band occasionally had to pause, mid-set, to censure an audience member for Sieg-Heiling in the pit."

I've been attending punk, hardcore, and metal shows since the age of 12, and I've encountered white-power partisans in a variety of locations, including performances by the multi-racial ska punks the Mighty Mighty Bosstones; the multi-racial post-hardcore group Orange 9MM; the multi-racial rap-rockers Rage Against the Machine; and the multi-racial death metal outfit Suffocation. None of those bands "dared listeners to assume the worst," yet the Nazi wannabes still showed up. The reason is that racist thugs don't care what band happens to be playing on a given night. They come out to cause trouble while aggressive music plays in the background.

Around 1994, the great New York City hardcore punk band Murphy's Law played a show I attended in Tampa, Florida. Much like Agnostic Front, the members of Murphy's Law had had their names dragged through the mud by Maximum Rocknroll back in the '80s. Murphy's Law singer Jimmy Drescher has described the zine's handiwork as "left-wing yellow journalism."

I saw a whole lot of neo-Nazi boneheads at that show. The band had to cut the music after a few songs because the racists were punching and bullying smaller kids in the pit. Then one of the fascists took a swing at Drescher. That led to a massive fight in which Drescher and his bandmates sent several of the neo-Nazis to the hospital. When it was all over, Murphy's Law got back on stage and finished playing its set.

Miret recounts similar anti-fascist exploits at Agnostic Front shows. "All hell broke loose" one night in Allentown, Pennsylvania, he recalls, when "hundreds of guys came to the concert with swastika flags." After a group of fascists attacked a black audience member, the place exploded. "The fighting spilled onstage and backstage," Miret writes. "Vinnie broke apart the mic stands and handed out pieces of metal to everyone backstage to crack some [Nazi] heads. He was like a general sending his troops out to battle."

Today, Agnostic Front's debut album is justly recognized as a genre landmark. When Victim in Pain turned 25 in 2009, The Village Voice said it "deserves to be ranked within a stage dive's distance of Velvet Underground and Ramones classics on any list of important and influential New York records."

Speaking of the Ramones, that band's guitarist, Johnny Ramone, liked to describe himself as a "Nixon Republican." When the Ramones were inducted into the Rock and Roll Hall of Fame in 2002, Johnny concluded his acceptance speech with the words "God bless President Bush." According to the scolds at Maximum Rocknroll, that puts him on the wrong side of punk rock history.

But if a founding member and principal songwriter for one of the greatest punk bands of all time can't pass your punk rock purity test, it might just prove that the test itself is total bullshit.