The Never Ending Battle of Ideas Between Capitalism and Socialism

The U.S. may have won the cold war, but the ideological struggle never ended. 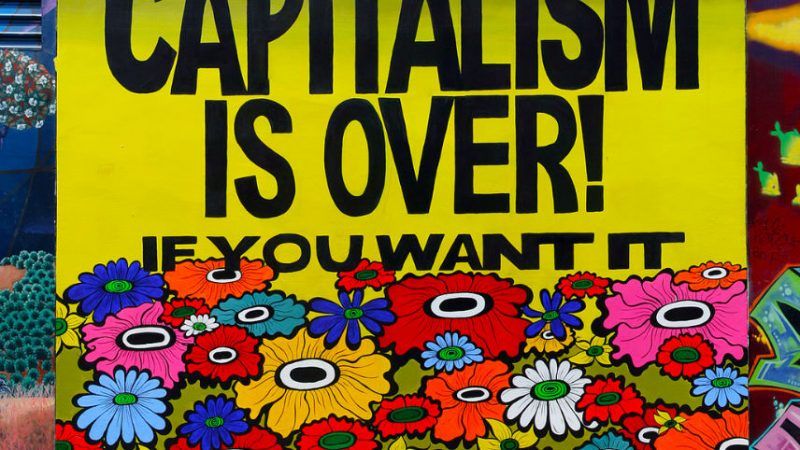 Today marks 100 years since the Bolshevik coup d'état in Russia overthrew the provisional government of Alexander Kerensky and replaced it with a communist dictatorship that lasted until the dissolution of the Soviet Union in 1991. Throughout this year, I have written a number of columns devoted to communism as a system of government and socialism as a system of economic organization, throughout the former Soviet bloc. It would, therefore, serve limited purpose to revisit the many social and economic ills that the events of November 7, 1917 unleashed upon the world. Suffice it to say that dictatorship of the proletariat and central planning have resulted in mass murder and relative immiseration wherever they have been tried.

Instead, I would like to use today's column as a call to action. Put plainly, we (i.e., libertarians, classical liberals and other promoters of free markets and small government) are at risk of losing the battle of ideas, especially when it comes to young people. According to a new poll conducted by YouGov on behalf of the Victims of Communism Memorial Foundation, "nearly 45 percent of millennials polled said that they would prefer to live in a socialist country compared to the 42 percent who said they preferred a capitalist one. Another 7 percent said that the preferred living in a communist country above all. The findings show that the percentage of millennials who prefer socialism over capitalism is a full 10 points higher than that of the general population."

Of course, I realize that all people, as they grow older, worry about the young, and it is not my intention to disparage anyone. Both Millennials and Generation Z have the potential to provide the world with astonishing technological and medical breakthroughs. They will not make the world a perfect place, but they can make it much better than it already is. But, improving the state of humanity requires institutions and policies conducive to openness and experimentation. Neither communism, nor socialism, can provide such an environment. I wonder how many young people realize how dependent the fulfillment of their dreams is on liberal democracy and a free market economy—the social and economic underpinnings of our society.

The reasons for widespread ignorance about the crimes and failures of communism are, by and large, embarrassingly banal. America's economic vitality broke the spirit of communist leaders and won the Cold War. In spite of economic setbacks like the Great Recession we have succeeded in creating material abundance that would have been unimaginable to previous generations. Even developing countries benefited, as globalization raised billions of people from absolute poverty. Yet, we have neglected the war of ideas by assuming that the results of the greatest social experiment ever conducted—the conflict between communism and capitalism—spoke for themselves.

Aside from economics departments, capitalism is treated with disdain by the rest of the social sciences. Much of the humanities have degenerated into post-modern mumbo-jumbo. Newspapers, television, and Hollywood are often run by people who cannot tell the difference between McCarthyism and the Gulag. Also, spare a thought for students in primary and secondary schools, whose education, such as it is, focuses on the real (as well as imagined) sins of America, while largely ignoring the bestial nature of America's Cold War opponent. How else can we explain that "one-third of Millennials believe… [that] more people were killed under George W. Bush than under Joseph Stalin"?

Learning about slavery and Jim Crow has its place. So does learning about Nazism and the Holocaust. How many people, however, know that the word "Nazi" is merely shorthand for the National Socialist German Workers' Party? How many people know that Adolf Hitler massively increased corporate taxes in order to expand the welfare state and took state control of the economy very seriously? How many people who have heard of the Italian fascist dictator Benito Mussolini know that he started off as a socialist and edited that country's main socialist newspaper, Avanti?

But, perhaps, we were always expecting too much. Perhaps the war of ideas cannot be won and we are destined to run in circles forever. Perhaps, as Milton Friedman put it in his 1995 Reason interview with Brian Doherty, "You just have to keep on trying to do it. There's no short cut. There's no way in which you're going to end the discussion, because new generations arise; every group has the same crazy ideas." If so, then allons! Let's get back to work and win the next round of our never-ending combat with socialism. We have done so before and we can do so again!